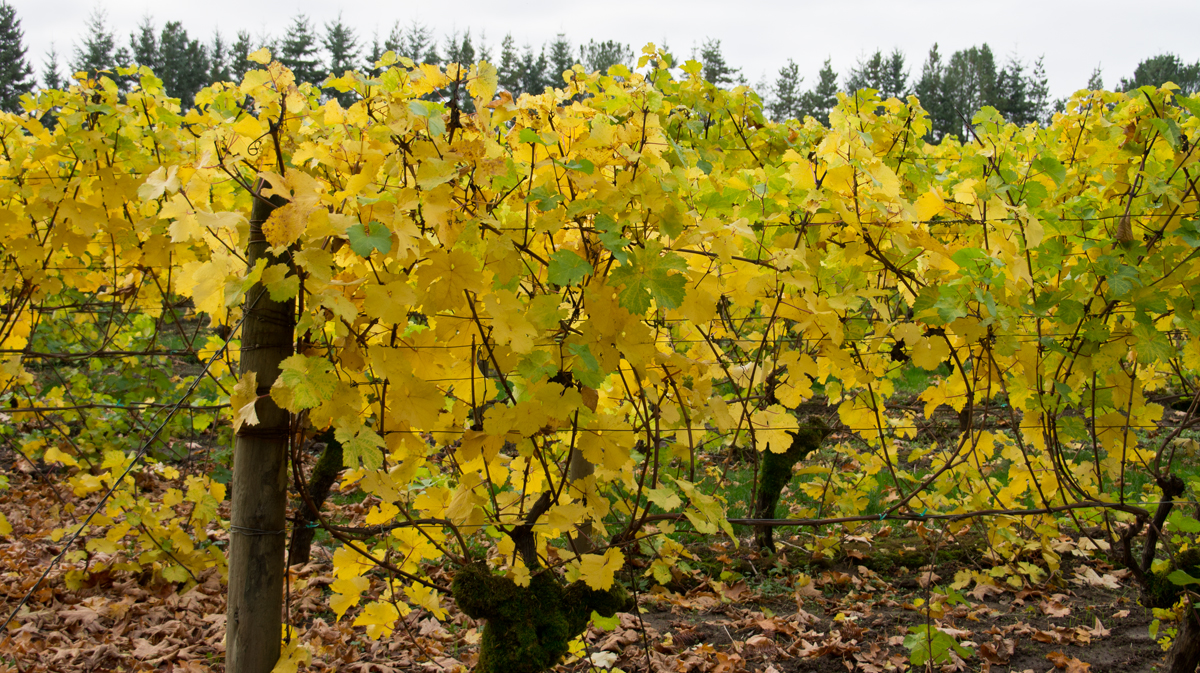 It’s funny how life works. When I was young, I used to visit Oregon with my family on a regular basis. Until this past August I hadn’t gone their in decades. Now I have paid two visits there in the past four months. The American Wine Society scheduled their annual conference in Portland this year, so in addition to attending I decided to head up a few days early to spend some time in Washington County in the northern Willamette Valley. I checked into the Grand Lodge in Tigard and met Carolyn McCormick from the Washington County Visitor’s Association and we took the short drive to Ponzi Vineyards in Beaverton. The first thing that strikes you when you enter the Willamette Valley in late fall is the colors. We were greeted by splashes of pale green and yellow – vines that had just been harvested. Laurel Dent greeted us and told us the history of this family owned winery while I sipped on their end product. In 1969, Dick and Nancy Ponzi moved from Los Gatos, in what would become the Silicon Valley, to Beaverton, bought a strawberry farm and planted 12 acres of wine grapes. Even though they had little to no experience in the wine industry, they dreamed of producing world class Pinot Noir. In 1970 the Ponzis planted Pinot Noir, Chardonnay, Riesling and a few other ‘experimental’ varietals. After the experiments proved less than stellar, they grafted those vines over to Pinot Gris in 1980. Ponzi Vineyards is the epitome of a family business. After running the winery and promoting Oregon wine for 20 years, they handed the winemaking duties to daughter Luisa in 1993. Luisa was one of the first women to study winemaking in Beaune, France. Around the same time, her brother and sister joined the family business. Their initial 12 acres has now grown to 128 acres on four vineyards all within 10 miles of the original property. Luisa added a Dijon clone of Chardonnay in the ’90s and began crafting a Burgundian style Chardonnay. Pinot Blanc was added as well as small amounts of Dolcetto and Arneis. After 35 years, the Ponzi family knew that they had outgrown their facility. They expanded their ‘garage turned winery’ until there was no place left to build. They were producing 25,000 cases of wine at a facility designed for 10,000 cases. They broke ground in 2006 on a new winery just minutes down the road. The four level gravity flow winery built into a hillside has become their dream come true. Next summer, work will be complete on their new tasting room at the winery so once again visitors will be able to taste Ponzi wines where they are being produced.

Dick and Nancy are still very much hands on and spend time at the winery every day. Dick conceptualized and designed the new facility. Daughter Maria handles sales and marketing and son Michel is the CEO. The family is very conscious of the environment and they are LIVE certified sustainable and ‘salmon safe.’ All of their wines except for their reserve wines have screw top enclosures. During my visit I tasted all of their current releases and was impressed by every single one. If you plan a visit to the Willamette Valley next summer, pay a visit to their brand new tasting room. Carolyn and I headed down to Cooper Mountain Vineyards where Director of Marketing Barbara Gross welcomed us and shared her winery’s story. In 1978, Robert and Corrine planted Pinot Noir and Chardonnay vines in Beaverton with the intent of producing new world Burgundy models. They added a Dijon clone Chardonnay although they retained some of the original vines because as Barbara says ‘it ripens nicely on the property.’ After selling the fruit from their first few vintages, they opened their doors in 1987 and offered their first vintage. The Coopers began with 20 acres which grew to 60 acres. They now own and manage four vineyards in Washington County all within a ten mile radius. The family pursued alternative farming methods in the ’90s and became the first winery in the Pacific Northwest to obtain organic and biodynamic certification. They are one of seven wineries in the Willamette Valley with those certifications. They believe its best to fix problems in the vineyards rather than in the cellar. ‘When you manipulate wine’ says Barbara, ‘you take it away from its terroir expression.’ The 17,000 to 18,000 cases they produce annually don’t last long. They nearly always sell out. Barbara is frustrated by the lack of support from Oregon restaurants. While they were quick to embrace local food, she says it’s easier to sell to a restaurant in San Francisco than it is to  one in Portland. ‘The only thing we can offer, thanks to mother nature, is inconsistency.’ Barbara believes that’s a positive, though, because each vintage offers unique characteristics not found in previous vintages. 2008 is what she refers to as the perfect vintage. Cooper Mountain is quaint and funky and their wines are superb. Barbara hopes you’ll pay her a visit. I highly recommend it.

For dinner we went to Hall Street Grill in Beaverton and enjoyed an appetizer of roasted garlic with Cambazola cheese. I enjoyed a grilled steelhead for dinner accompanied by an ’06 Dukes ‘Thomas’ Pinot Noir. Dinner was outstanding and it was a perfect ending to the first day of many more to come.