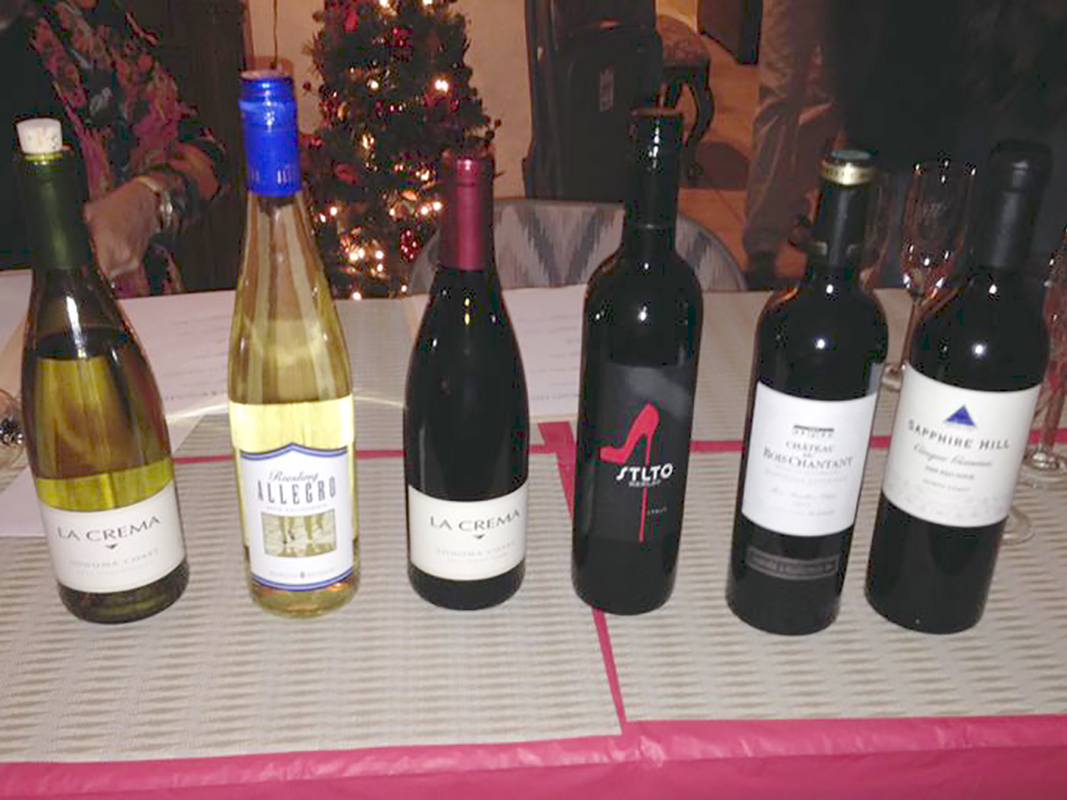 Now that the holidays are safely in the rear view mirror and we’re into the second month of 2014, it’s time to start getting caught up with wines we have tasted recently. Here’s what we had in our glasses on two recent evenings.

We gathered at Tony and Alisa’s place in Fallbrook, right across the street from Mike and Tricia Hoffman’s Live Oak Vineyard. First up was Costa Catterina’s 2012 Arneis from Italy. Amy found it light and lovely on the palate. Alisa gave it four out of five stars and added “we would drink this every day.” As of this writing this wine isn’t distributed in the US, but it should sell for around $13.

We tasted the 2012 Handcraft Artisan Collection Inspiration White. An off-dry wine, Jan thought it had a slight fizz with melon and apricot and said it would be a good summer wine. Tony liked the slight effervescence and slightly sweet taste and awarded it four stars. Ken said it “jumps in my mouth.” He liked the nose and the finish. It sells for around $13.

Francis Ford Coppola’s 2012 Emerald Label Pinot Grigio was next. Jack found it true to varietal and gave it three stars. I picked up pineapple and kiwi on the nose and thought is was bright and fruit-forward, a great value at $11.

We moved back to Italy for our fourth wine, another offering from Costa Catterina, the 2010 Nebbiolo D’Alba. Amy picked up earth on the nose and felt was well-balanced. Tony said he wasn’t crazy about it while Robb found it classically varietally correct. If you can find it, it should set you back about $15.

Down under we went for the 2009 Jacob’s Creek Reserve Cabernet Sauvignon. Robb said ‘you can always count on this wine.’ Ken thought it was okay, but nice for the $10 price point. Alisa felt it needed more time and picked up lavender notes. Tony liked the nose and called it a “great ten buck wine.”

We wrapped up this evening with another wine from Jacob’s Creek, the 2010 Reserve Shiraz. For Tony it was “great nose, great color and good taste. I would buy a case of this one!” Jan, on the other hand felt it was too hot. Ken said it was very nice and thought it could age a while and still be very good. At the $10 price point he found it unbeatable. For our next tasting we met at Kim and Brain’s place in Murrieta. We began our adventure with La Crema’s 2012 Chardonnay from the Sonoma Coast. Chris found oak, apples and pears and enjoyed its lingering finish. He felt it was a bit pricey at $20. Jake gave it two and a half out of five stars, noting it was pleasant, but not much finish. Al called it one of his ‘go to’ Chardonnays; buttery taste and fruit forward.

The 2012 Martin and Weyrich Allegro Riesling was next. Jean said it was very light, pleasant and floral. Ken found a big pineapple nose and thought it was very crisp with a nice finish and gave it four stars. Tony thought it had just the right amount of dryness and enjoyed it a lot. I got pineapple on the nose, too, as well as melon and thought it would be a great pairing for spicy wings. Brian’s take was “sweet petrol on the nose. And apples! Rather apple strudel.” It was a bit too sweet for Jan, it retails for $10.

We had another La Crema wine, the 2012 Sonoma Pinot Noir. Chris liked the fruit forward nose and found cherry, raspberries and spice on the palate. At $23 he thought the price point was great. It was a three and a half star wine in Jake’s book. He said it was smooth with a soft berry nose and a very pleasant sustained finish. Al liked the nose, but felt it drank a bit hot for a Pinot.

At the halfway point we tried a 201 Merlot from Stlto, an Italian producer. Jean wasn’t overly impressed. She called it a nice value wine with an okay nose and short on fruit. At $12, Ken thought it was a nice wine considering its youthfulness. He felt it was a bit tight. Tony simply said it was a very nice Merlot!

Next we tasted a 2011 Château de Bois Chantant Bordeaux. It had a typically old world earthy nose, but not much finish. Brian said “Inky & slinky. This is terrific for $12. Reminds me of my schoolboy days.” Jan liked the nose, but was disappointed with the taste.

Our last wine was a find from Underground Cellar. A very interesting concept in online wine purchasing, you pay one price and stand a good chance of getting ‘upgraded’ to a better wine. For example, I wound up getting this $40 bottle of Sapphire Hill Cinque Gemma from Sonoma for half the price. It tells you you’re odds of getting an upgrade. Chris was impressed with the nose and dark berry and cherry palate. Jean thought it was nicely balanced with good tannins. A few people thought the nose was a bit funky.

We’ve tasted quite a few wines since these. There’s much more to follow.