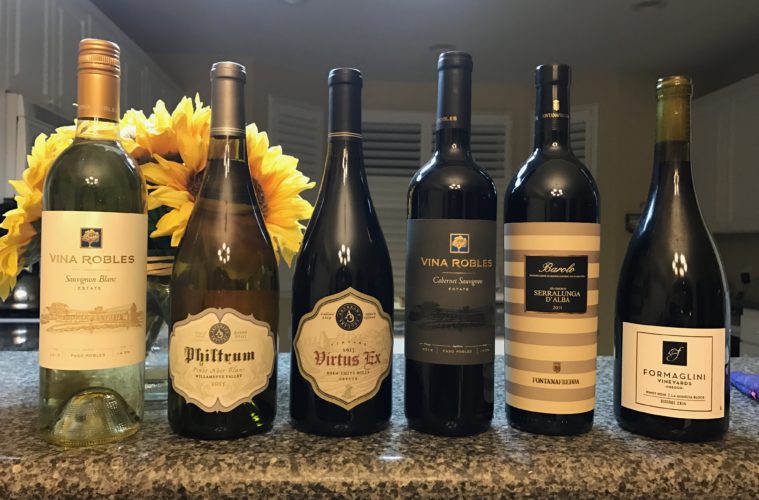 You never know who you’ll meet when you take a group on a winery tour. Last year I met a woman named Linda who booked another tour with me this year. When she heard about my wine tasting events, she not only expressed an interest in attending, she offered to host. Two couples canceled at the last-minute. Linda got on the phone and within moments several of her neighbors stopped by to save the day.

On the way home from Carmel, my radio co-host Kat and I stopped at Vina Robles Winery in Paso Robles. We began our wine tasting with their 2015 Sauvignon Blanc. Brian said “smells like under-ripe apples and tastes surprisingly dry.” Jim and Judi’s comment – “Grapefruit on the nose and more on the mouth.” An excellent value at $16, our panel gave it close to four out of five stars.

I wasn’t familiar with Pinot Noir Blanc, but our next wine was exactly that, the Abberant Cellars 2015 Philtrum from Oregon. The winery describes it as a non-sparkling version of a Blanc de Noir. Brian called it very pleasant and interesting. Jim and Judi said it was refreshing. A few felt it overpriced at $30. 344 cases were produced and it got mixed reviews from the group.

We moved on to another offering from Abberant, the 2013 Virtus Ex Pinot Noir from the Eola-Amity Hills AVA of the Willamette Valley. Kim commented on pepper on the nose and called it soft and earthy. Brian said it was “delicious stuff.” Jim and Judi described it as elegant. I thought the nose was intense and the pale color true to a good Pinot. Priced at $40, it averaged four stars.

Our next wine was another from Vina Robles, the 2014 Cabernet Sauvignon. The Cab was sourced from two different vineyards in Paso Robles and the 17% Petit Verdot blended in came from their Huerhuero vineyard. It was the favorite wine of the night for many in our group. I loved the dark, red fruit nose. Jim and Judi said it was one of the best Paso Cabs they have had and gave it a perfect five-star score. Brian called it really luscious. Frank said it reminded him of fine tobacco. Kim simply said it was yummy. It scored right around four and a half stars and it sells for $26.

We tasted the 2011 Serralunga D’Alba Barolo from Italy. This noble Nebbiolo received a perfect five-star score from Linda who said it was very, very good and easy to drink. Jim and Judi thought it was quite elegant. I enjoyed the long finish. It scored close to four and a half stars and sells for $35.

The evening’s last wine was the 2014 La Quercia Vineyard Pinot Noir from Formaglini Vineyards in the Willamette Valley. 150 cases produced, Brian enjoyed the lovely perfumed nose and described it as “soft as rainwater in the mouth” and called it “a refined, superior wine.” I loved the raspberry and cola nose. At $49, it, too scored close to four and a half stars.