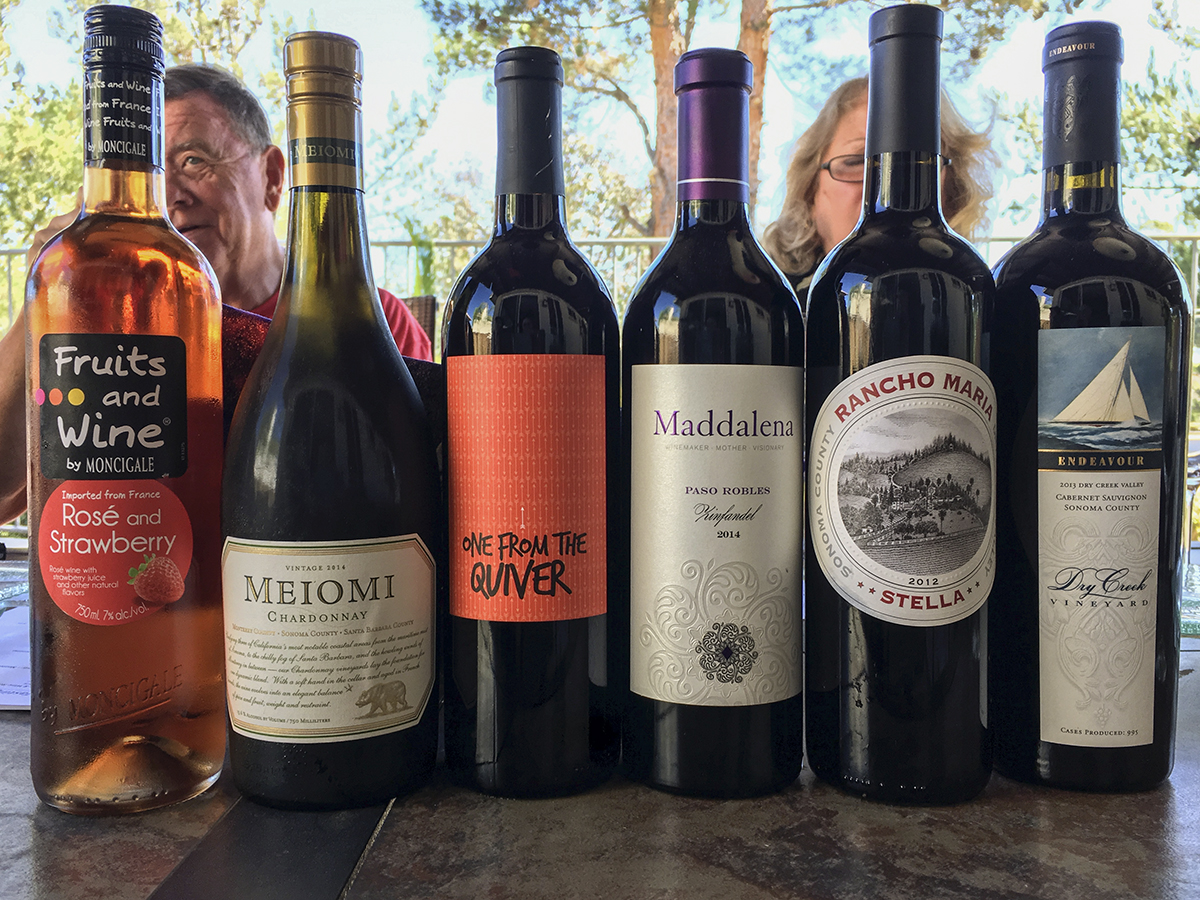 How do you plan a 4th of July wine tasting? You start with wine, of course, and the wines I selected ran the gamut from strawberry rosé to Sonoma Cabernet. Add in some barbeque, beer, tequila, a Buffalo style potato salad with blue cheese and cap it off with fireworks and you have a winning recipe. The first wine we tasted was, to put it mildly, unique. Fruits & Wine Rosé & Strawberry from France was first up and there was no mistaking strawberries on the nose. A couple of people said it would make a good sangria base. Kim called it “Kool-Aid in a wine bottle.” Al said it would be good for someone who doesn’t drink wine. Ideal if you’re looking for a sweet summer sipper, but not a hit with the group. It sells for about $10.

From Monterey we popped a bottle of 2014 Meiomi Chardonnay. I loved the nose, picking up pineapple, kiwi and guava. Kat called it a good sipper with light oak on the finish. Ken liked the subtle nose and found it smooth and velvety. Randy called it very tasty and dry and said he loved it.  It scored just under four out of five stars and sells for $20.

Next was a 2015 Argentinean Malbec called One From The Quiver. Randy calls himself a Malbec nut and gave it five stars, calling it a great value at $12. A couple of tasters noted a bitterness on the finish. It scored just about four stars.

Maddalena’s 2014 Paso Robles Zinfandel was next. Ken called it a very unusual Zin with a unique nose and flavor. Jean said “berry berry and spice and everything nice.I’d buy this one!” Kat found it too fruity for her tastes, Kim thought it was a nice peppery wine. At $12, it also scored right around four stars.

We ended with two wines from Sonoma County, starting with the 2012 Rancho Maria Stella, a Petite Sirah blend with Zinfandel and Cab blended in. A tiny 300 case production, the deep purple color is striking. Kim called it a nicely layered blend. Kat called it smooth and easy-drinking. Ken said it had a luscious nose that opens up nicely. Randy said “have this at home.” Al called it silky smooth. it scored close to four and a half stars and sells for $36.

Dry Creek Vineyards has been a favorite of this tasting group and tonight’s finale was no exception. Everyone fell in love with the 2013 Endeavour Cabernet Sauvignon. Randy gave it a perfect five-star score and called it excellent. Al said it was “best of show.” Jean thought it showed great potential. Kim liked the nose of licorice and cherries. Brian simply said “there is nothing bad about this wine.” At $70, it scored better than four and a half stars.