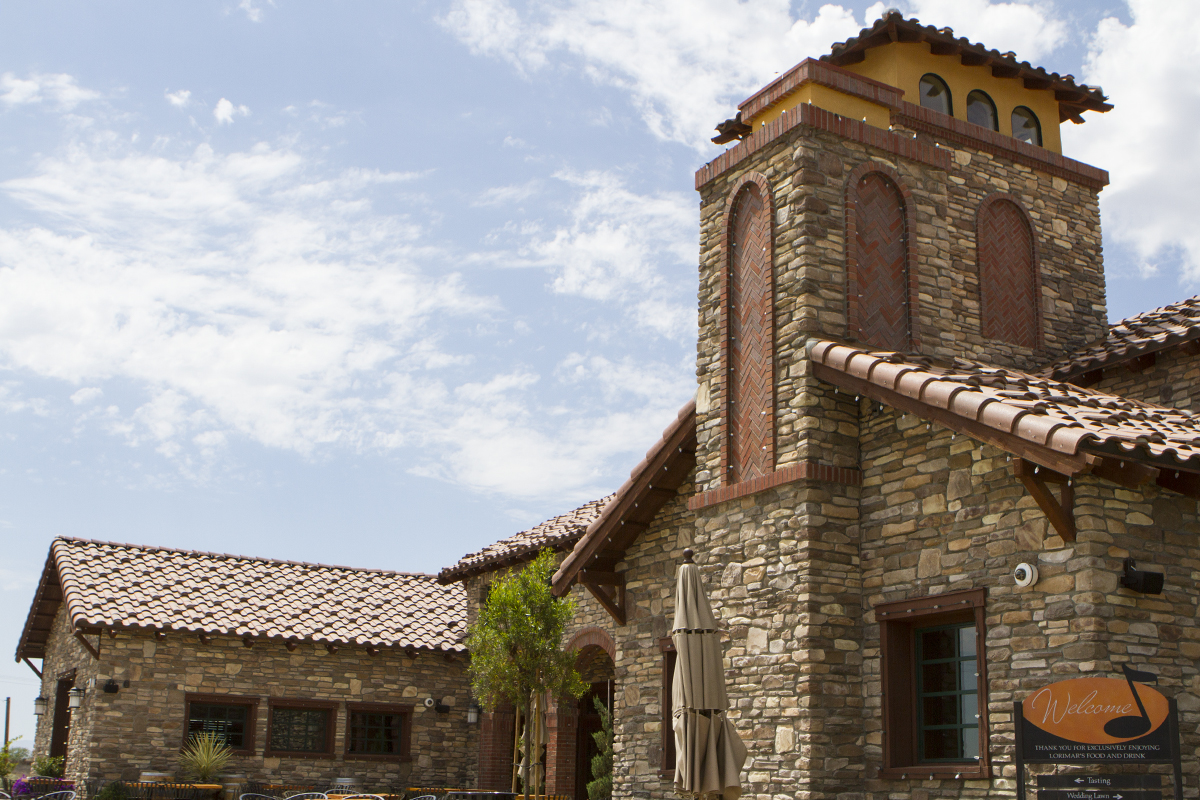 In May 2012, a dream that Mark Manfield and Lawrie Lipton shared became a reality. They opened the doors to the newest tasting room in Temecula wine country, Lorimar Winery. On the site of Jim Boner’s former Providence Winery, this stunning winery is a sight to behold. Lorimar Winery isn’t new. In 2010 they opened a tasting room in Old Town Temecula which remains open.  They recruited longtime Temecula winemaker Marshall Stuart who has been crafting their wines nearly from the beginning.

I recently sat down with Winery Manager Patrick McIlvain to pick his brain about his role and how he views Lorimar. Patrick’s resume is beyond impressive. A Culinary Institute of America graduate, he has held nearly every position imaginable in the restaurant industry: kitchen manager, sous chef, Executive Chef, General Manager and others. He soon became burned out after long 16+ hour days in the restaurant business and decided it was time for a change. Having spent time in Napa, he knew he wanted to get back into wine and begin searching for a job at a winery. The search led him to a meeting with Mark Manfield. They connected instantly and he was hired nearly on the spot. Tasting three wines, he told me, sealed the deal. The 2009 Solo Cabernet Sauvignon, Duet (Cabernet Sauvignon/Mourvèdre blend) and Fusion, a blend of Zinfandel and Petite Sirah. He says when you walk into the winery it’s lavish and new with a lot to take in. It feels like you’ve walked into someone’s formal living room, “but we encourage you to put your feet up.” With an associate’s degree in culinary development and a bachelor’s in hospitality management, he feels food and wine are nearly synonymous. Being hospitable, he adds, is first and foremost what defines the winery. He likens overseeing the tasting room to being a chef working the line, orchestrating the team, expediting the floor. “Lorimar itself is a fusion of wine, art and music.” They’re all co-related, all forms of art. Mark and Lawrie have a passion for music, blues and rock especially. Walk through the tasting room and you’ll see guitars, drums and amps. Almost all the wines have musical names – Solo, Duet, Allegro, Crescendo. Lydian, the Cabernet Franc, is named for Lawrie’s wife.

Once a month, Patrick hosts an Epicurean Food Demo. Cooking remains one of his true passions and he finds himself in the kitchen at least five times a week, cooking for friends and family. He likes to keep his skills sharp. The theme each month is different, fun and unique. The focus August 7th is poached fruit and hard cider. Patrick calls his demos “dinner and a show.” They are designed to be interactive, not just a cooking show where you take home some recipes. Music is a central theme and you’ll find live music every weekend both in the Old Town location and in wine country. Patrick believes their team has kept an eye on the prize. They pride themselves on being customer service oriented and being a part of the community. As we were speaking, construction crews were busy building shaded pergolas on the patio. Future plans include a Brazilian barbecue, a wood fired pizza oven and a wood fired grill. They feel the bar needs to be raised. They don’t want to try to be like any other winery in the valley. They hope everyone starts saying “we should be more like Lorimar.” Their goal is to be innovative, fun, unique and engaging on a daily basis. “We see bigger and better things happening every day.” So far, I believe, they are succeeding.