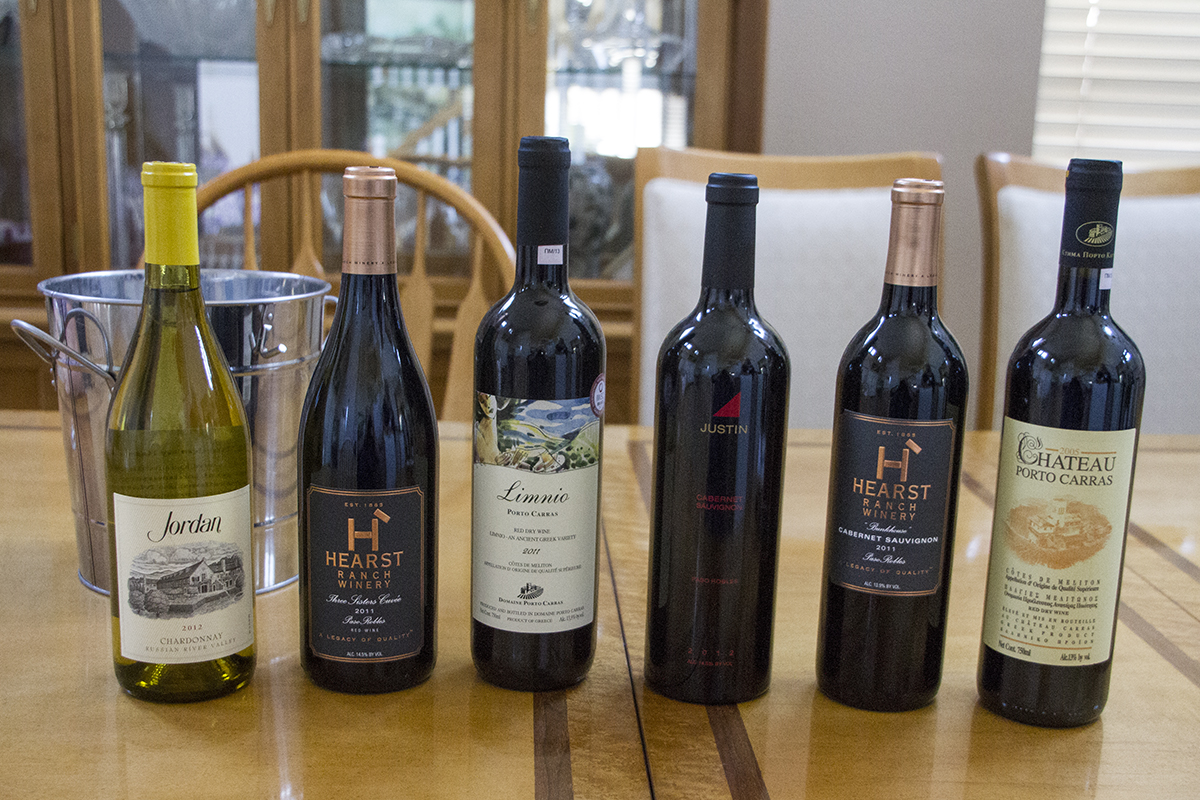 It happens nearly every week. The setting changes, but the gist doesn’t. Anywhere from eight to 20 of us gather at a different friends home. I bring six or seven wines and get everyone’s feedback on them and then compile their comments here. Folks bring a plate of food and usually a “bonus” wine. It’s a ritual we all look forward to.

We began a recent tasting with 2012 Sonoma Chardonnay from Jordan. Ken liked the nose, thought it was complex with subtle citrus notes. Kim thought it was very fresh, not buttery with a bit of lemon on the back of the palate.Brian liked the slight sourness, but didn’t feel the $25 price tag was justified. It scored an average of 3.25 out of five stars.

Wine number two was the 2011 Three Sisters Cuvée from Hearst Ranch Winery, a blend of Grenache, Syrah and Mourvedre from Paso Robles. Jake called it a blockbuster value at $20 with dark cherry and lead pencil on the nose and a long finish. Ken liked the notes of strawberry and butterscotch. Brian called it “lovely stuff. Strawberry jam with attitude. Peppery. Delicious.” Cindy said ‘YUM!!” It averaged better than four stars.

Limnio is the oldest recorded grape varietal and we tasted the 2011 vintage from Domaine Porto Carras. Porto Carras rescued this grape from the brink of extinction. Ken found the nose reminded him of Red Vines licorice. Jake loved the beautiful violet color and the way the nose opened up after some time in the glass. Brain said ” Very European. Very Greek. Tastes of sand and stone and waves crashing against rocks.” Chris enjoyed the licorice nose and dark cherry fruit, and cloves on the palate. It averaged a score of nearly four stars from our tasters and it goers for $21.

We tasted another wine from Hearst Ranch Winery, the 2011 Cabernet Sauvignon. Cindy noted pepper on the nose followed by cherries. She called it fruit forward with cherries and blackberries and thought it would be a great barbeque wine. Other tasters weren’t as impressed calling it “obvious and lacking subtlety” and “so-so.” It averaged about three stars and you should expect to pay about $30 for it.

Next we tasted the 2012 Justin Cabernet Sauvignon from Paso Robles. Ken found blueberry and milk chocolate on the nose that morphed into blackberry with caramel. He would lay it down for a few years. Brian found it “too sugary and not a grown-up wine.” Cindy thought it was a “smooth operator” that should improve with age.” She got jalapeño on the nose with blackberry underneath. Chris felt it had lots of potential. At $23 it averaged about three and a half stars.

We ended with Domaine Porto Carras’ 2005 Chateau Porto Carras. Chris fell in love with this wine, calling it full-bodied with an old world nose with earth, perfume and anise and a fantastic finish. Kim called it bland. Cindy noted the anise on the nose, but felt it was somewhat thin. At $34 some felt it overpriced. It scored close to three stars.