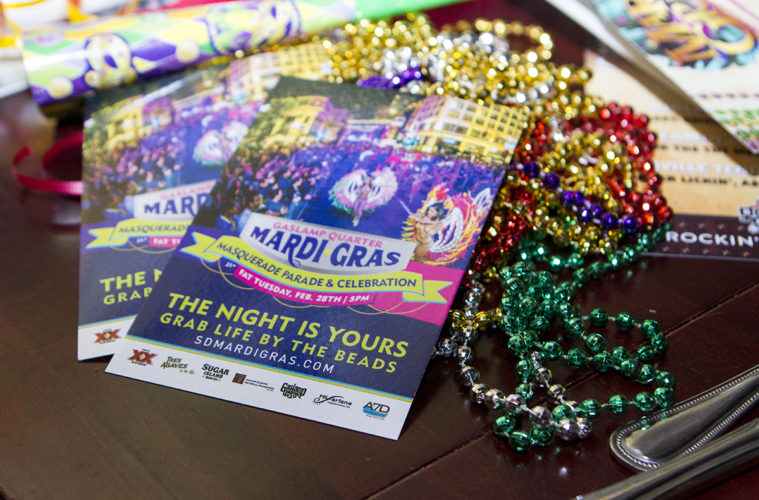 Mardi Gras. Fat Tuesday. Images of New Orleans instantly flood your mind when you hear those words. But if you can’t celebrate it in the Big Easy, why not opt instead for San Diego’s House of Blues? San Diego’s Gaslamp Quarter has its own Mardi Gras celebration each year, and this year Kat and I checked out how the House of Blues is doing it. As we entered, a band onstage was playing Suzie Q, the iconic Creedence Clearwater 60s hit. Christy guided us to our table and along the way informed us not only does this HOB location boast more folk-art than any other, she pointed out a walled lined with thousands of tiny die, none of them displaying an ace. “Bad luck” she explained. Our server Chrissy greeted us and showed us three menus that were available on this particular night. In addition to the regular menu, there was the Nashville menu and the Mardi Gras menu. On Christy’s recommendation, we ordered the signature Voodoo shrimp appetizer from the regular menu. It features five shrimp swimming in a Cajun spiced Abita Amber (New Orleans beer) sauce atop jalapeño cornbread. Our Purple Rain cocktail for two (Grey Goose vodka, blue Curacao, cranberry, lime and pineapple juice) washed it down delightfully. While we waited for the Voodoo egg roll, Chrissy brought us each some crawfish étoufée. It featured plentiful chunks of crawfish in a rich, spicy sauce served over white rice. The Voodoo egg roll featured crawfish with Andouille sausage and corn in a remoulade served over shredded cabbage and red onions. Nice and crunchy, it topped off our meal delightfully. The Mardi Gras menu is being offered at the House of Blues all February. The Gaslamp Quarter Mardi Gras Masquerade Parade & Celebration is slated for Tuesday February 28 from 5:00 – midnight. General admission food and drink packages are $55 and include a $30 food and beverage credit good at all 17 participating restaurants and bars. The $100 VIP package offers several perks including a VIP viewing area. New this year is the Big Easy Bites and Booze Tour. Check the sdmardigras.com website for all the details. Laissez Les Bon Temps Rouler!