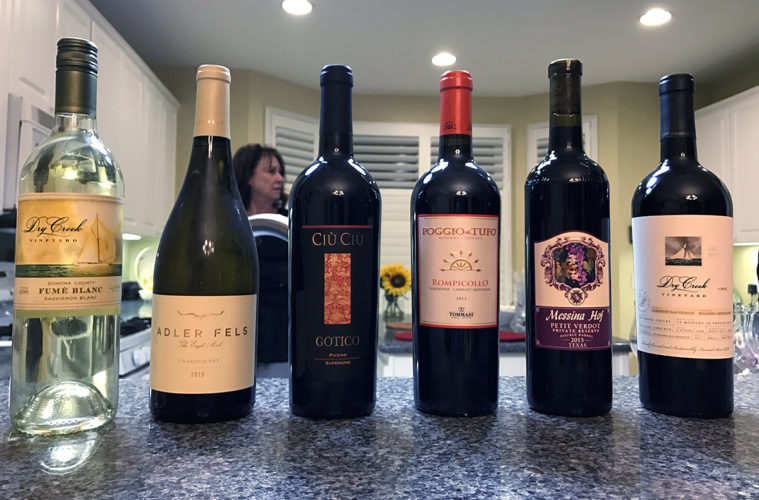 Around The Wine Tasting Table

We kicked off 2017’s round of wine tastings at Linda’s place in Murrieta. Turnout was good, food was plentiful and wine… well, that’s never an issue. Dry Creek Vineyard is one of our favorite producers and we began with their 2015 Fumé Blanc. Robert Mondavi was the man who coined the name when describing a dry, Loire style Sauvignon Blanc. Al G. loved the nose and found it “soft and not citrusy.” Jim thought it would be great for the patio on a warm afternoon. Al L. found it crisp and fresh and a great value at $14. Ken called it one of the best whites. Our tasters gave it a score of nearly four out of five stars.

Wine number two was also a Sonoma wine, the 2015 Adler Fels Chardonnay, sourced from the Russian River Valley and Monterey County. Unfortunately, our group found it lacking. Many called it watery and one called it “unremarkable.” No one would purchase it. It retails for $20.

We crossed the Atlantic for the first of two Italian wines,  Gotico from Ciù Ciù. 70% Montepulciano and 30% Sangiovese, Ken called the nose “wonderful” and enjoyed the bright cherry. Brian described it as “lovely” and called it a great value. Kim said it made her want to move to Italy. It’s definitely an old-world wine and a great value at $9. Our tasters scored it just over three stars.

The next Italian was the Poggio al Tufo Rompicollo, a 60% Sangiovese, 40% Cabernet Sauvignon blend. Cherries clearly burst through on the nose. Jan liked it as a pairing for spicy food. Brian called it a terrific value at $15 and described camphor and cloves in the mouth. Kim found it very drinkable. It also scored a little better than three out of five stars.

From Italy we traveled to Texas for the 2015 Messina Hof Private Reserve Petit Verdot. Al L. loved the nose and taste, but felt it could use another year or two in bottle. Jean said it “could be GREAT in a couple of years.” Ken thought it was unbelievable with lots of dark fruit. Brian called it “a wine to dive into and get lost in.” It scored better than four stars and it sells for $30.

We ended the tasting with another Dry Creek Vineyard wine, the 2013 Cabernet Sauvignon. Al G. liked the big, fruity nose and called it well-balanced. Jim picked up bacon and smoke on the nose. Ken gave it best nose of the night honors, saying “Dry Creek never disappoints.” At $22, it scored just over three stars.