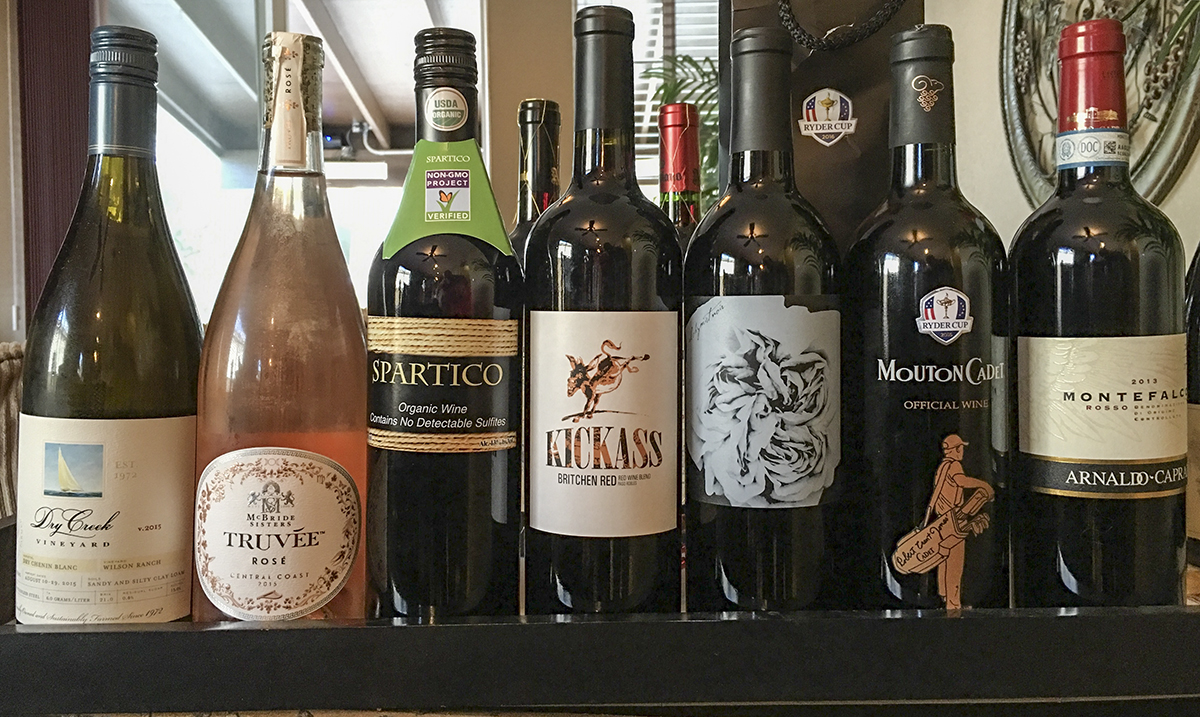 We met yet again, this time on Cinco de Mayo at Tony’s newly remodeled home. As it was May 5th, we not only tasted wines, we added carne asada, some shrimp, tequila and for good measure, a bit of cerveza.

Seven wines sat in front of our very large group and we began our journey with Dry Creek Vineyard’s 2015 Dry Chenin Blanc. Most of us loved the nose. I found all sorts of fruit; kiwi, pineapple and Fuji apple, and thought it was very food friendly. Susan loved the smooth finish. Kim called it a reliable everyday wine and Cindy felt it was nice for warm summer nights. Ken liked the balance and felt it was a good value at $13. Jim and Judi thought it was an excellent Chenin Blanc. It scored well over four out of five stars from our group. Dry Creek has been producing this wine since 1972.

Next was the Truvée 2015 rosé from Paso Robles, a blend of Grenache, Syrah, Tempranillo and Roussanne. Patrick found it light and refreshing and said he’d pair it with spicy dishes. Jim and Judi found it too sweet for their palates. Cindy said she’d like it if she were a rosé fan. I liked how balanced it was and the fresh strawberry nose.The group scored it just about three stars and it sells for around $15.

Our first red of the night was the non-vintage Spartico Organic Red Blend from Spain. A 50/50 blend of Tempranillo and Cab, it’s USDA  certified organic and has no detectable sulfites. Ken said it had a grape jelly nose and thought it was very smooth. Laura found it sweeter than she expected. Pat and Yuki liked the flavor and the color. It received an average score of just over three stars and it sells for $12. I stopped at AronHill Vineyards on a recent visit to Paso Robles and Kathryn Aron wanted us to try her newly released KickAss Britchen Red, a blend of Primitivo, Zinfandel and Cab. Laura thought it was a fun, kicky wine good for easy-going evenings on the patio. Jim and Judi thought the name suited it to a “t” and liked the bright red fruit and body. Kim called it spicy and very nice and Brian called it a heavy-duty wine, “subtly sexy.” It averaged close to four stars and it sells for $32.

We tasted another wine from Paso Robles, the 2014 WINC Alchymist Noir Red Blend. A blend of Syrah, Barbera and Valdiguié, Patrick said it was full-flavored and long on taste. Ken liked the nose with fruit and some spice and called it “smooth all the way. I found it somewhat astringent. Pat and Yuki liked the nose and the flavor. Most felt it was a great value at $13 and it got an average score of just under four stars.

We tasted the 2014 Ryder Cup Selection from Mouton Cadet, selected as the official wine of this year’s Ryder Cup in Minnesota running September 27 to October 2. Primarily Merlot, Cindy said it was smooth, nice and velvety. Patrick said it smelled like black cherries and it was dark and complex. Laura called it a nice, solid wine. Brian called it minerally and “rather grown-up.” At $26, the group gave it a score of around three and a half stars.

Finally we tasted a wine from a winery I visited four years ago in the Italian province of Umbria. The 2013 Arnaldo- Caprai Montefalco Rosso is a Sangiovese, Sagrantino and Merlot blend. Definitely old world in style, Cindy, in true Cinco de mayo spirit, said “me gusta!” Ken enjoyed the finish. I liked the tart fruit and solid tannic structure. It sells for a very moderate $16 and it got a score slightly higher than three and a half stars.