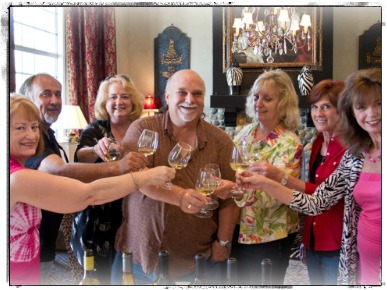 I’ve been tasting a lot of wine lately, most of it very good. In late April, the Occasional Wine Council was called to order again just before my visit north and my ill-fated tumble when I got home. We met this time in Temecula Wine Country. Colleague Ginger Giordano’s brother was gracious enough to allow us the use of their lovely wine country home. Not only did we have six wines to taste, not only did we all prepare food, but we also got a sneak preview of one of Temecula’s newest dining and entertainment venues, Jazzy’s.

The first wine we tasted was the 2010 Shannon Ridge Lake County Sauvignon Blanc. Fermented in stainless steel, it had a faint nose with hints of citrus. It was crisp on the palate with grapefruit and tangerine flavors. A solid Sauv Blanc, it’s got some competition in the $16 – $19 range, but it held its own and paired nicely with a cold shrimp and mango salad prepared by Sue Montgomery.

Our second and final white was the 2010 Napa Cellars Chardonnay. Judee Jachim Smith prepared some wonderful spicy meatballs to accompany it. You could pick up oak on the nose. This was a well balanced Chardonnay, with a smooth finish, but unspectacular. I found it overpriced at $20.

We moved on to reds beginning with the 2009 Merlot from Napa Cellars and that’s where we hit a bump. I’m not sure if the wine was corked or just a bit off, but none of us cared for it. I could tell there was cherry fruit lurking in the background, but it was having a difficult time shining through. I’d be curious to try another bottle. Its list price is $22. A highlight of the afternoon was an appearance by Omar and Adrenia Smith, owners of Jazzy’s Restaurant who brought along their chef Monet Taylor. We enjoyed mozzarella and cherry tomatoes drizzled with olive oil and Balsamic vinegar as well as Jazzy’s Temecula Cheese Steak and mushroom crostinis. This was a sneak preview for our group as the restaurant hadn’t yet opened its doors, but it’s now open with food and live jazz at 30590 Rancho California Road in Temecula.

Our second red was the 2008 Napa Cellars Cabernet Sauvignon. I prepared stir fried beef with Japanese eggplant and black bean sauce to accompany it and if I say so myself – yum. Unfortunately I was underwhelmed by the wine. I thought the nose had funk on it and there was a harsh edge on the palate. It sells for around $26.

Red number three was a Paso Cab, the  2005 Vihuela Cabernet Sauvignon. Priced at a mere $10, this wine had a soft nose, was well balanced with traditional Cab characteristics. It paired beautifully with Monet’s cheese steak. At $10 a bottle, I’d snatch up a case or two. Last up was another offering from Napa Cellars, the 2009 Zinfandel. I’d call this a classic Zin. It’s not a fruit bomb, but it is fruit forward. I picked up plum notes and thought it was well balanced. It paired very nicely with Mark Simpson’s venison and pancetta meatballs. You should be able to find this wine for about $22.