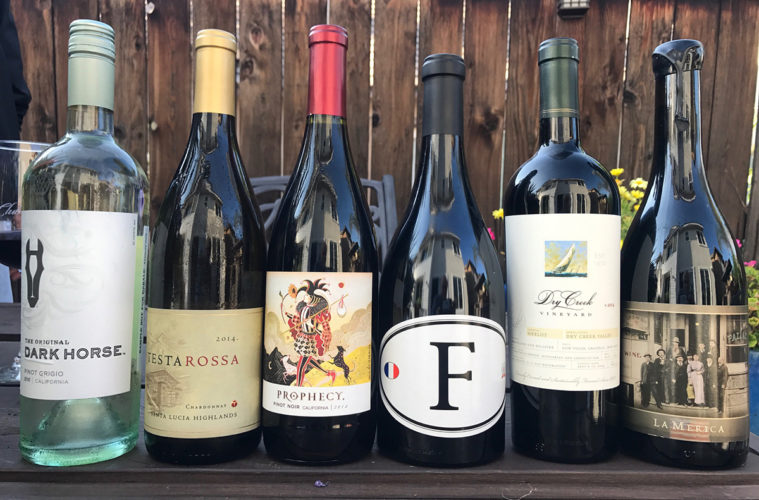 Once again we gathered, a big group of wine lovers this time in Kathy’s spacious and beautiful backyard. Six wines beckoned us, along with tasty treats from the assembled troops.

Our first wine was the 2016 Dark Horse Pinot Grigio from California. It was really the ideal wine to get the party started. Lisa liked its hint of apple and crisp finish. Jean also found it crisp and very pleasant and liked the $9 price point. Esther and John on the other hand felt it was a bit too sweet. Darren said it had a great finish. Al liked the nose and called it easy drinking. Most tasters enjoyed it and thought it was quite refreshing. It scored just under four out of five possible stars.

We moved to California’s Santa Lucia Highland for wine number two, the 2014 Testarossa Chardonnay. Aged in 100% French oak, 20% new, it spent 11 months in barrel. Ken said it was delightful with some butter, but not too much. I loved the golden color and buttery nose and thought it was elegant. Brian said it was “silky and sweet in the mouth with a slightly savory residue.” Kim said at $38 it was “a bit overpriced, but I’m not mad at it.” Kat wasn’t wild about it initially, but liked it better on the second taste. It scored close to four stars with the major hesitation being its price tag.

We moved over to reds, starting with the Prophecy 2015 California Pinot Noir. The grapes for this wine are sourced primarily from Clarksburg in the Sacramento Delta region. Jean called it light and what she’d expect for $14. Kathy simply called it yummy. Esther loved it. Lisa said it was easy to drink. Jim said “not a bad wine for the price.” Kim called it a good everyday wine. It scored an average of 3.75 stars.

The Locations F4, from France, was next. Renowned winemaker Dave Phinney decided to shake up the wine world by blending grapes across different regions, in this case Rhône and Bordeaux. Primarily Grenache and Syrah, this non-vintage was tight straight out of the bottle, but aeration helped immensely. I found notes of cranberry and felt it would be good with food. Ken noted hints of leather and called it an interesting blend. Kim was not a fan and said it “should have stayed in France.” Judy called it very fruity and good for the $19 price. There were mixed opinions and it scored about three and a half stars.

The 2014 Dry Creek Vineyard Sonoma Merlot was next. 78% Merlot, this wine also has Cabernet Sauvignon, Malbec, Cabernet Franc and a touch of Petit Verdot and was aged in French, Hungarian and American oak. Jim found it pleasant and nicely balanced. Ken called it his favorite wine of the night by far. Kat said Dry Creek was always consistent and good and this wine was no exception. Lisa said it was spicy. At $26, it scored nearly four points.

Our last wine was from V. Sattui in the Napa Valley, their 2014 La Merica, a blend of several old vine grapes including Zinfandel, Grenache, Petite Sirah, Alicante Bouschet and Mourvedre. Aged 18 months in French oak, Lisa called it spicy and smooth and gave it a perfect five stars. Jan liked the nose and finish and commented on notes of plum and cherry. Ken called it a nice blend with a bit of smoke. Brian said “delicious, inky fruit with an aftertaste of plum stones and stewed prunes. Very enjoyable.” I loved its beautiful violet color. At $33 it received the night’s highest score of close to four and a half stars.