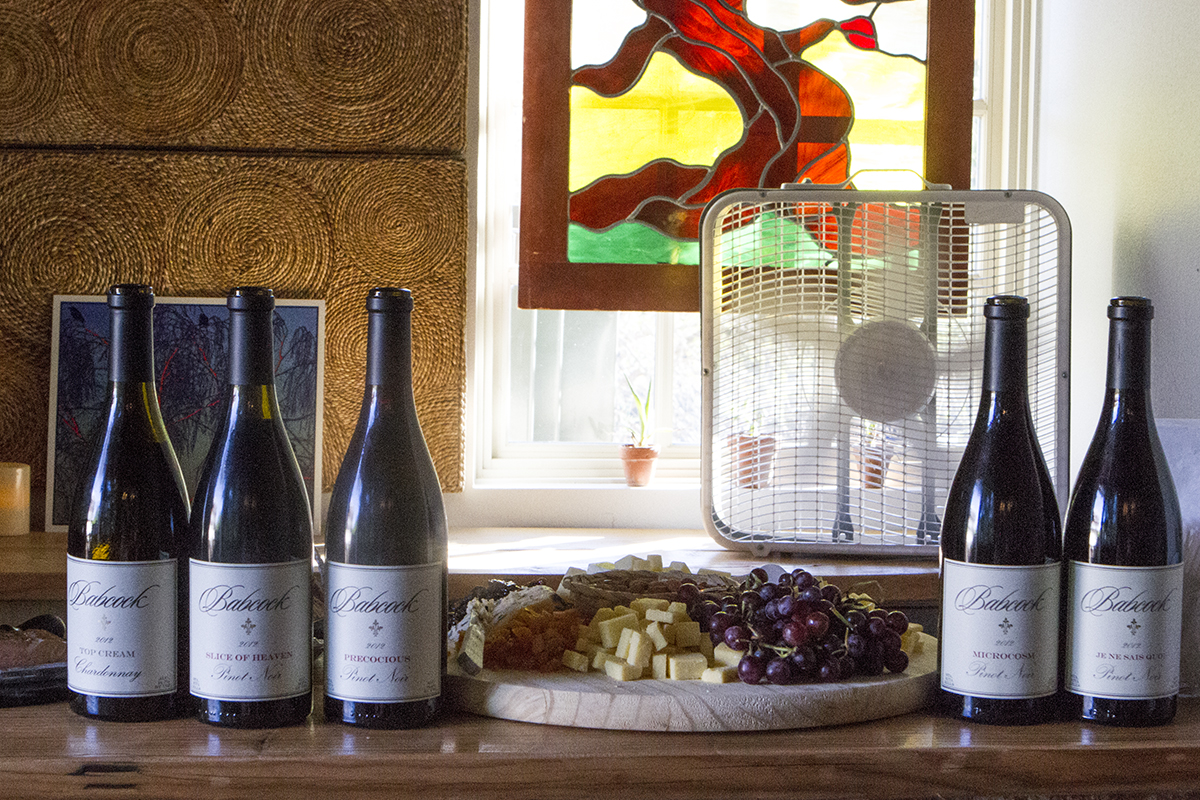 The Night of Pinot Noir

Disclaimer: The wines we tasted were provided free of charge by Babcock Winery. “Delectable.” “Outstanding.” “Elegant.” “Lovely.” “Intoxicating.” Those are just a few of the adjectives our tasting group used to describe Babcock Wines. On a recent visit to the Santa Ynez Valley, I spent an evening at Melville Winery, where eight Santa Rita Hills producers poured magnificent Chardonnay and Pinot Noir. On e of the producers was Brian Babcock from Babcock Winery. Brian was kind enough to ship a selection of his wines to taste, so I gathered the troops and we met at the Temecula Valley Cheese Shop.  Owner Shawna and her daughter Stasha prepared a beautiful array of cheeses, fruits and meats to go with these wines.

First up was the evening’s lone Chardonnay, Babcock’s “Top Cream.” Chris called it a well-balanced wine with a front of apples and notes of vanilla and oak. Jean said she “loved this wine.” Robb loved the concentrated fruit and gave it a perfect five-star score. The name “Top Cream” comes from the vineyard’s two to three feet of topsoil. At $45 it averaged nearly four and a half stars.

We proceeded to the first of four Babcock Pinot Noirs, the 2012 “Slice of Heaven.” Brian called it “lovely, smoky, soft as rainwater.” Chris commented on the candied nose extending to a red berry palate and gave it four and a half stars. I could hardly stop taking in the nose, but when I did taste it I fell in love. For the full story of where the name “Slice of Heaven” came from, click here. All four Pinots are priced at $60 and this one averaged about four and a quarter stars.

Our second 2012 Babcock Pinot was “Precocious.” Brian called it earthy and brambly, as late summer fruits. I called it an “honest to goodness Pinot” and thought the nose was stunning. Carol found it earthy. It scored an average of four stars.

“Microcosm” is the name of the third Pinot Noir we tasted. I picked up lots of cola on the nose. Robb found this a very concentrated wine that needed time in the glass to open up. Chris got cola with butterscotch and notes of cassis with a nice tannic structure. It averaged just about four stars.

We finished our tasting with Babcock’s 2012 “Je Ne Sais Quoi” Pinot Noir. There’s a lengthy story behind the wine’s name that you can read here.  Again, this wine had me at the nose. I could hardly put it down. Jean found leather, “yummy” berry and currant and loved it with blue cheese. Robb called it “elegant.” Brian said, “This one has it. Whatever it is… This is a wine to live for… and to buy.” It averaged better than four and a half stars.

I have a newfound love for the wines of the Santa Rita Hills and I tip my hat to Bryan Babcock for the gorgeous wines we enjoyed.