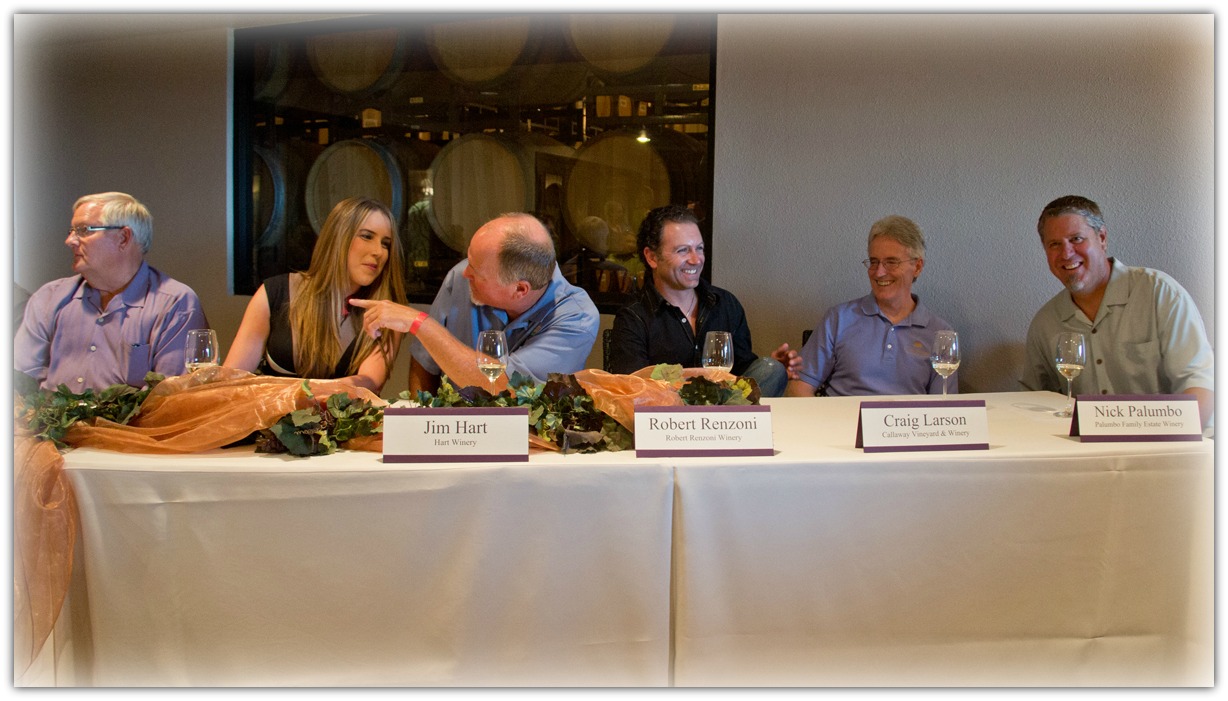 Temecula Wine – Finding Our Own Identity The Temecula Winegrowers Association recently hosted the 3rd annual CRUSH at Callaway Winery: bringing growers, winemakers and food purveyors together to share wine, food and experiences. As always, the event began with a winemakers’ roundtable. Moderated by Krista Simmons, the panel consisted of Marcelo and Damian Doffo, Jon McPherson, John Broderson, Ben Drake, Jim Hart, Robert Renzoni and Nick Palumbo. It’s a rare opportunity to see so many area winemakers all in one place and to hear their insights on the state of Temecula wine.

Ben Drake has had his hand in more than 30 wine grape harvests. A 5th generation resident of Riverside County, he graduated from Fresno State where his interest in wine began to develop. He moved to Temecula to serve as the manager of ag development for a major corporation. In 1976 he went into farm management. It takes years, he says, to figure out what is best suited to terroir and climate. Although it was devastating for many, Drake believes the arrival of Pierce’s Disease in 1999 was a “saving grace.” With so many vines destroyed, it allowed growers to plant to plant grapes better suited to this region on commercial root stock with correct spacing and improved techniques. The new varietals and clones made the Temecula Valley better able to compete with other wine regions. We have a Mediterranean climate here that’s ideal for Italian and southern Rhone varietals. Ben’s son-in-law works with him and he hopes his son will take over when he finally steps down. Robert Renzoni is a 4th generation winemaker. His family has been in the wine business for 126 years, beginning in Tuscany in the 19th century. He left upstate New York for Temecula in 2004 and fell in love with the area and its wineries. After conducting his own research, he found similarities between the soil here and that in Tuscany. With that in mind, he launched Robert Renzoni Vineyards & Winery and decided to specialize in Italian varietals.

Jim Hart noted what a tight wine community it is. For example if he’s got a problematic wine, he can go to any number of fellow winemakers for a possible solution. “It shows in the wines we make. I feel privileged to work with some of the people here in this valley.” Renzoni also commented on the teamwork environment present in the valley, likening it to the Napa Valley of the 70s portrayed in “Bottle Shock.” “If one of us wins, we all win.” Hart is concerned that with only 1500 acres planted to grapes here, we need to take a longer vision approach to to preserving agriculture. Only a small area of this valley is suitable for growing grapes. The county seems interested in promoting the wine industry, he notes, but doesn’t seem to understand the industry needs vineyards to support it. If the region continues its growth there won’t be enough fruit unless the county steps in. Marcelo Doffo and his son Damian craft the wines at Doffo Winery. Marcelo mentioned that Damian wants “all the toys. Thank God, we used to do it all by hand. Now we have a pump.” Doffo is truly a family operation. With five children, on most weekends all seven members of the Doffo family are at the winery. Marcelo wants to remain a small winery, keeping the focus on producing quality wines. Most winemakers, he believes, are here because they believe in and have a passion for what they do. Says Damian “If you make good wine, people will get excited about it and want to talk about it.”

Nick Palumbo has been a fixture in this valley for more than a decade now, crafting small lot wines at Palumbo Family Winery. Noting some of the large resort wineries, he doesn’t have an issue with them as long as there’s balance with a  focus on the vineyards and the wine. He, too, believes there’s room for growth, but wine needs to be the priority. “We’re finding out our own identity.” There are small wineries that want to remain that way. He’s seeing more wine aficionados at his winery and some of the other boutique wineries and they are finding fine wines. He’s excited by the top quality wine being produced here. Craig Larson is the winemaker at Callaway Winery and says they see everyone from first time wine tasters to true aficionados. Many of his visitors are coming in from Los Angeles and San Diego and are here for events and a good time on the weekend. He’s seen an enormous rise in the demand for Muscat and says it’s today’s hot varietal. It’s nearly impossible to find new plants. He believes if his customers want sweet wines then he needs to offer them. He also believes a well educated staff is a key component. They can educate consumers that there are other wines they may not have tried.

Krista touched on the younger wine demographic and asked Damian what Gen Y is looking for. He responded that all of his close friend now have wine cellars and love to talk about food and wine pairings. He watches trends on Facebook and notes that younger demographics who know wine are coming here. He emphasizes to his servers that they need to take the younger tasters seriously. Renzoni said he has noticed a big evolution as a society. When he turned 21 none of his friends had any interest in wines. He notes that today’s younger generation is becoming more educated and displaying an interest in good wines and craft beer. It’s Ben Drake’s belief that many winemakers are “missing it” by not offering more blends. “We kind of get stuck up on varietals.” He likes the idea of blending grapes from four or five countries, resulting in a balanced wine with smoothness and finish. He says you ought to get a bit creative with the name, too. Today’s wine drinker wants a wine that’s approachable now. “We need to get off our high horse and start having fun.” Craig Larson says he loves making blends with an emphasis on Tempranillo, Grenache, Mourvedre and southern Mediterranean grapes and notes the terroir here is very distinctive and has a lot of spice. Most wines in Europe, he points out, are blends. There’s an old expression that goes “it takes a lot of beer to make good wine.” Tongue in cheek, McPherson added “a six pack goes into every case we make.” He’s playing with a hop-infused Riesling.

The subject of heat arose and Palumbo said “we need the heat.” Without it you can’t grow quality fruit. This year, Drake said, the heat came at the right time.  We have much more control over water than they do in Europe, where he said, they depend on rain for their water. In wrapping things up, McPherson said “Credibility is built on your reputation.” If you don’t make quality wines consistently, you may as well forget it.