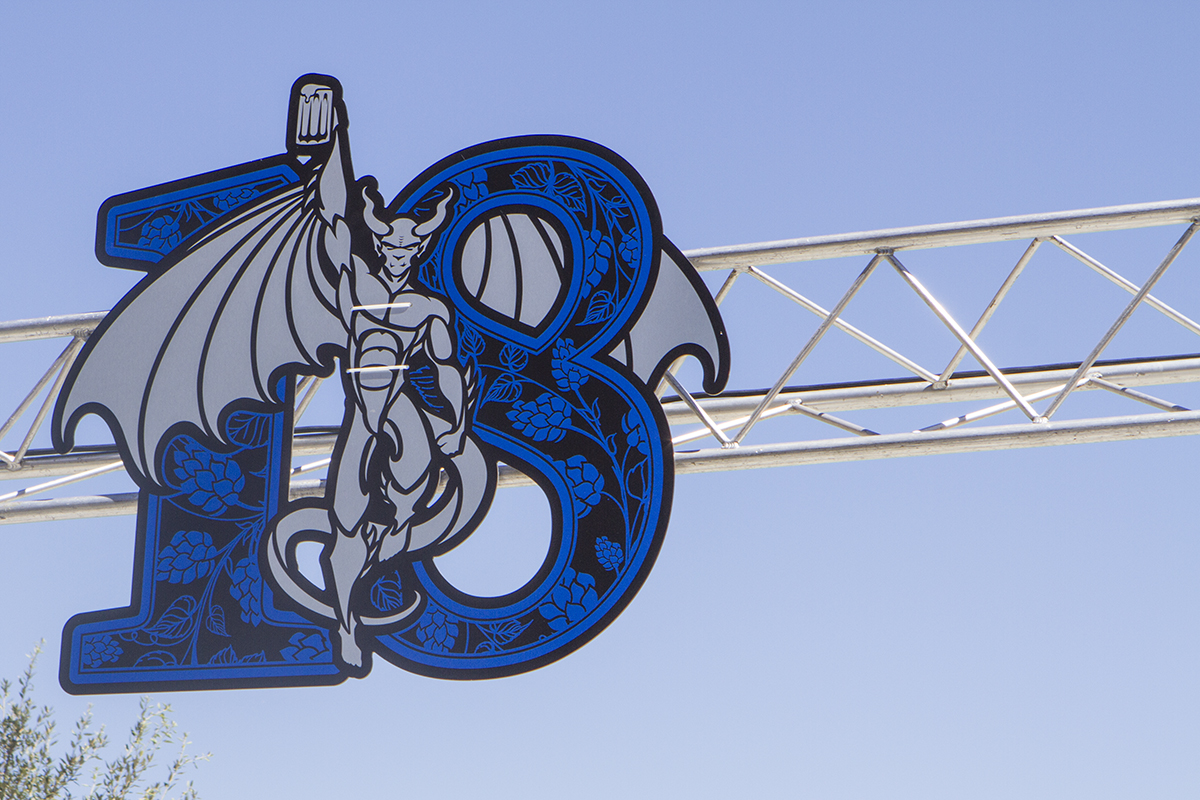 I ran into a fellow blogger at the rare beer lounge at Stone Brewing‘s 18th Anniversary who said to me, “this is taste bud overload.” He summed it all up in one four word sentence. While this was Stone’s 18th go ’round, it was the first one I had attended and it was a true eye-opener. Brewen’s Empire Trolley provides a shuttle service from the parking lot to the event and Amy Brewen and I were on hand not only to keep an eye on the trolley, but to explore all there is to see and do at this anniversary extravaganza. The festival occupies much of the CSU San Marcos campus. I was stunned by the scope of this event. While I don’t know the exact number of attendees, it seemed like well over a thousand. Sixty breweries were stationed on two levels in three different areas. It wasn’t tough to tell which breweries had the most fans. Russian River Brewing Company, founded by former Temecula resident Vinnie Cilurzo, whose parents Vince and Audrey planted Temecula’s first wine grapes. Lines were long for tastes of Pliny The Elder and Compunction, their barrel-aged sour blonde.

This was the day I saw for the first time the pretzel necklace. What a brilliant idea, and from what I’ve been told, something that’s been in existence for quite some time. It’s so simple to execute. Grab some pretzels, loop them onto a string or ribbon, tie them around your neck and you’re good to go! Take a sip of beer, grab a pretzel. Sheer genius.

The festival runs from 11 until 6 and the entire time Brewen’s Empire Trolley stands ready to take you from the parking lot to the event grounds. It’s the ideal way to rest your feet for all the walking you’ll be doing soon enough. You’ll also get the chance to meet new friends who you just may wind up hanging out with for the rest of the day and maybe more.

You will be doing all sorts of walking at the festival. The 60 breweries are spread out over three levels, each of them pouring as many as six three ounce tastes. There are food concessions (Amy and I each opted for grilled sausage), a rare beer section for an extra fee, Steve’s cigar lounge and live music on different stages. Don’t be a dummy like I was and wait. Make sure you plan on attending next year’s festival and have Brewen’s Empire Trolley take you there and back. It’s truly a no-brainer. You can board the trolley in Temecula and ride to the Stone Anniversary Celebration for just $95, which includes round-trip transportation and admission. Brewen’s Empire Trolley began operations in 2009 and now had a fleet of three trolleys, Molly, Roussanne and Boyertown, all classic vehicles with wooden seats and brass bells. Amy has more than 20 years experience in the event-planning industry and prides herself on her flexibility and her ability to provide just the tour you’re looking for. Brewen’s offers a variety of wine and beer excursions and one of the most popular is the Premium Wine Excursion. For $139, you’ll start with a tasting upon boarding and then enjoy a five-hour guided tour to four wineries including a table side lunch. The price of the tour includes discounts on purchases at each winery as well as additional discounts from community partners. At the end of the tour, you’ll take home a souvenir wine glass as a memento. To arrange your excursion, give Brewen’s Empire Trolley a call at (951) 235-2938.