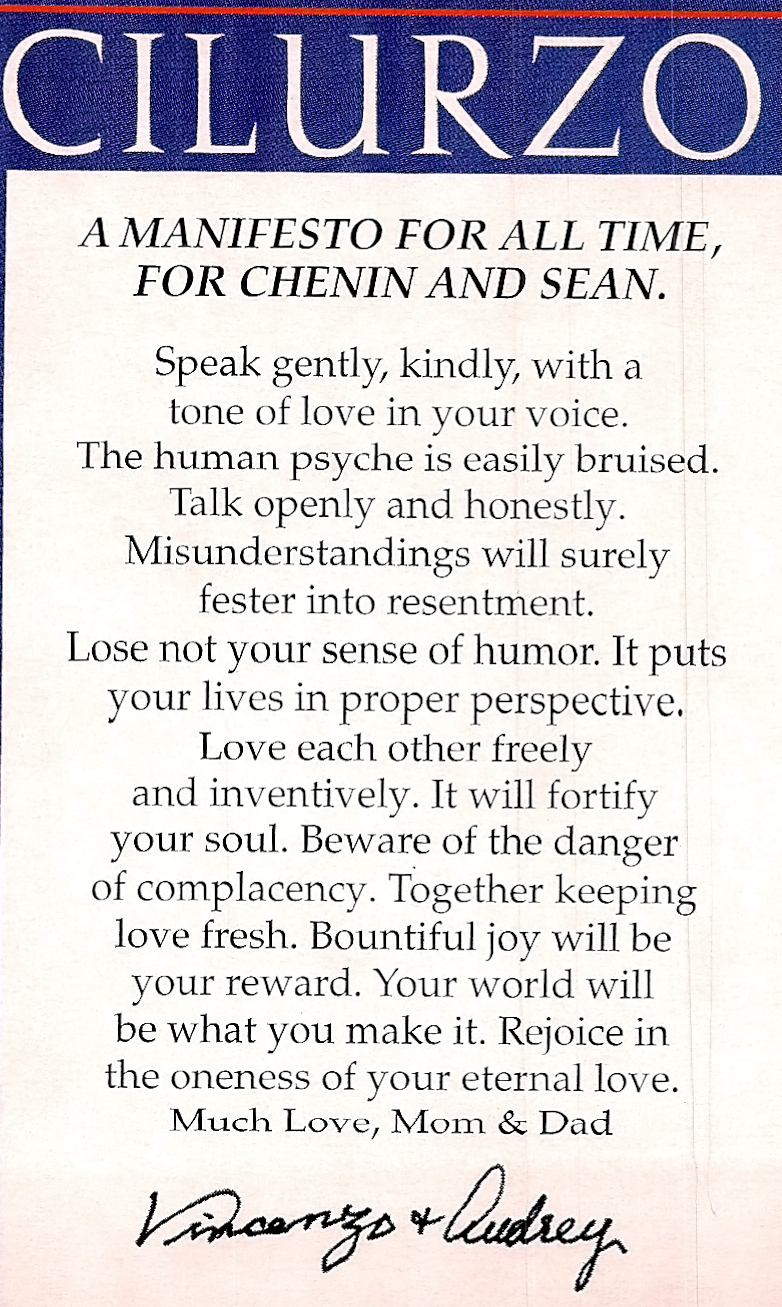 “All we wanted to do was make good wine and get people coming here.” I first met Audrey Cilurzo at Wilson Creek Winery during last year’s Harvest Celebration. Audrey was signing copies of Temecula Wine Country, the book she and her husband Vince wrote with Rebecca Farnbach,  part of the Images of America series. Vince had spent years as a television lighting director in Los Angeles and in 1967 they were on the waiting list to open a McDonald’s franchise in Escondido. On the way, they passed through the sleepy town of Rancho California (later to become Temecula), population: 350. They did some exploring and met Brack Hale, grandson of the inventor of the Hale Telescope on Mt. Palomar, who was one of the valley’s two real estate agents. Audrey says “We just fell in love with this whole valley and of course there was nothing here then.” Dick Break had planted a couple of experimental vineyards, but no one was making wine. Dick told the Cilurzos that he had done some climate studies and that the weather in Temecula was very similar to the weather in Napa. They hired him as a consultant and his first suggestion was that they plant Petite Sirah and Chenin Blanc. “That was kind of the beginning of everything” says Vince. The Cilurzos knew nothing about making wine or even growing grapes for that matter. Thet learned what they could from Dick Break, took classes at UC Davis and bought every book on wine they could get their hands on. The folks at Davis had classified Temecula as a region four, meaning it was too hot for grapes. The Cilurzos aimed to prove Davis wrong. The following August, with their first grapes on the vine, a salesman pulled up in a Jeep and out stepped Ely Callaway, dressed in a woolen suit with vest and wearing white buck shoes. Keep in mind the temperature was hovering around 100° and there was nothing but dirt roads as far as the eye could see. Callaway told the Cilurzos he had two hours to learn everything he needed to know about wine. They wound up becoming good friends, and Callaway later opened Temecula’s first winery. Audrey & Vincenzo In Front Of The Land They Had Just Purchased

Audrey and Vince grew grapes for ten years and sold most of them to Brookside Winery in Rancho Cucamonga. They opened Cilurzo Winery in 1978. “We just had this faith that everything was going to be good over the years and it was.” They developed a fantastic following. “In the early days Audrey could sit down in the tasting room and read an entire book and if five people would come, that would be a pretty good day.”  Eventually hot air ballooning caught on in the valley and there was no place for a hungry balloonist to grab a meal, so they asked if Audrey could cook something for them. That was the start of their catering arm which became a major part of their business.

Ely Callaway was good for Temecula on one hand, but on the other say the Cilurzos, he had a negative impact. He proclaimed Temecula was too hot to make good wines and launched a massive advertising campaign with the slogan “White Wine Is All We Make”. At that time, Callaway, Mt. Palomar and Cilurzo were the only three wineries in the valley and Cilurzo was the last stop. All they sold were red wines. Visitors would bring up the Callaway slogan to which Vince joked in response “he’s just mad at us because we won’t tell him how to make good red wine.” Wine Spectator jumped on the bandwagon reinforcing the idea that Temecula was too hot to produce good wine. Vince fired off a letter to the editor refuting the claim and it got published.

The Cilurzos wound up making about ten different wines including Cabernet, Petite Sirah, Chenin Blanc, Chardonnay and a Late Harvest Petite Sirah. One of their best sellers was a wine called Vincheno, a Petite Sirah/Chenin Blanc blend named after son Vinnie and daughter Chenin. When asked how they want to be remembered, it’s by the success their children have attained. Vinnie is the brewer at Russian River Brewing Company whose Pliny The Younger has been named the top beer in America and on Planet Earth by Beer Advocate.  He will be one of four brewers at Eatery in Manhattan. Chenin and her husband Sean run Basket Case Wine in  Pacific City, OR. Chenin travels the farmers market circuit in the summer and they carry Vinnie’s beers in their tasting room.

Audrey says “we were involved in everything. It took ten years to get the boundaries of wine country established.” Ely Callaway thought there should be three diferent AVAs for the Temecula area. “It doesn’t make any sense.” Audrey felt strongly there should only be one, noting that Napa used the boundaries of the phone book for their AVA. In the end, Audrey’s idea prevailed. “We pointed everything in the right direction.”

These days she’s involved with the Riverside International Wine Competition which will be held in Temecula for the first time this year at South Coast Winery. It was truly a privilege for me to spend time with two of the true pioneers of the Temecula Wine Country. After our visit, Vince showed me his wall of fame, including a photo he took of Frank Sinatra. Cheers to the Cilurzos. Our industry is better because of them. Vince & Raquel Welch "She took a liking to me"