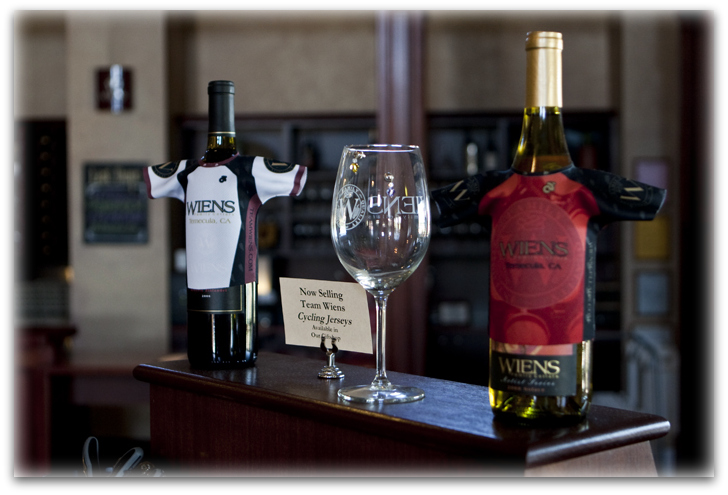 I sat with winemaker Doug Wiens on a cool September morning at Wiens Family Cellars in Temecula. Doug told me about the impact the late summer heat was taking on the harvest. It took some of the potential out of what was shaping up to be a perfect year, but all in all, things are looking good. The Pinot Gris and Pinot Noir had already been picked and were in the tanks before the heatwave hit, but the Syrah and Merlot grapes suffered a bit of “raisining” and yields may be slightly down.

Making wine has been a part of the Wiens family for many years. Doug is the winemaker and co-owner with his brother Jeff, the General Manager, George, the Architect and Dave, the Director of Business Operations. There are two other Wiens brothers: one works at the winery and the other doesn’t. The Wiens roots are in Southern California. Doug got his bachelors degree in horticulture from Colorado State and went on to Cal Poly, San Luis Obispo where he focused on food science and technology. He began toying with winemaking in college in the late 70s when he added yeast to Welch’s Grape Juice. He says “it was really horrible. It tasted like hot dogs… smokey, sulphery and nasty!”

The Wiens family planted vines in Lodi in 1996: Cabernet Sauvignon, Merlot, Zinfandel and Chardonnay and to this day source some of their grapes from there. Their first Lodi crush was in 2001, but the family realized the potential was tremendous in the Temecula Valley and they moved their operations south. They were on hand to help Ponte Family Estate get off the ground, making their wine in ’04 and ’05 and to help them to spec out their equipment and advise them on what they needed to add.

Doug is a self taught and self-styled winemaker. When I asked if he had any mentors he said he didn’t, but he did say he thought Robert Mondavi was “pretty cool” in his philosophy and in what he did for California’s wine industry. Wiens Family Cellars 1st crush was in 2006, and when you arrive at the winery, you’ll see Big Reds prominently advertised. Doug says those are the types of wines he and the family gravitate towards, with Primitivo and Cabernet Sauvignon being his favorites. He says his wines get their character from his intense style of farming and it’s how the wines came out when he first began to make them. His ’07 Refugio Cabernet from Vineyards in La Cresta won a Gold Medal at the California State Fair for the best Cabernet Sauvignon in Southern California as well as best of region. Doug hopes it’s the first of many. He believes that Temecula had given up on Cab, and that wineries were just taking what they got as opposed to the intense farming practices he utilizes for his style of Big Reds.

Their “artist series” wine features work from local artists, with the art of Ashley Collins displayed on the Gold Medal winning Cab. Production is currently at about 10,000 cases annually. His goal is to increase that number to around 15,000. Doug says he’d rather double his quality than his volume. If you can’t make it to the winery, you’ll find Wiens wines at about 70 independently owned restaurants and boutique wine shops in San Diego, Orange and Riverside Counties. Sunday October 18th is shaping up to be a big day. Not only is the winery hosting their annual Wiensfest, Doug’s son is getting married at the winery that same day. Barrel Room and Members Only Tasting