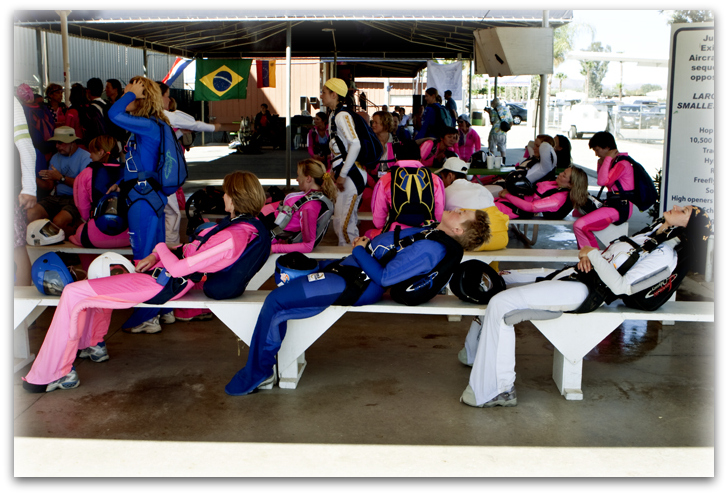 Jump For The Cause – In Loving Memory of Shari Lewis All this week, women from 31 nations have gathered in Perris, CA to combat a mortal enemy: breast cancer. Forgive me for straying off the subject of wine, but I felt this was important enough to merit a story. My friend Ginger Giordano of Going Grape (there’s a wine connection!) told me about this event and I decided to head to Perris and find out first hand what was going on.

This is the 10th anniversary of Jump For The Cause. Mallory Lewis formed the event to pay tribute to her mom, Shari Lewis, who died from cancer in 1998. The first event ten years ago was a fund raiser for a battered women’s shelter and raised $11,000. Last year more than a quarter of a million dollars went to the City of Hope for breast cancer research as a result of Jump For The Cause. As of yesterday, more than $830,000 had been raised this week alone.

I met with Mallory’s assistant Adrian Davies at The Bomb Shelter at  the Perris Valley Skydiving Center. He told me the event has become “what it was supposed to be” and he and Mallory both expect it to grow even bigger. It has slowly been gaining global attention. Some of the best camera people in the world are on hand and they are documenting each jump as the women attempt to set a world record, with ten planes lifting 180 women to 17,000 feet in an effort to do the largest all-female freefall formation. The women each have had to qualify, not only as a skilled skydiver (the least amount of jumps by a participant is about 400, the most 16,500), they also have each had to raise at least $3500. Adrian says the focus has shifted from getting to know each other to “game on”. The youngest jumpers are 25 and the oldest is an AARP member. Mallory has also included the Wounded Warrior Regiment with ex-Special Forces and Golden Knight Dana Bowman jumping under a purple heart canopy while flying smoke and a 1000 square foot flag. There have been two problems this week. The heat has been well above 100 degrees and the Santa Ana winds have been kicking up. Wednesday morning the winds came up so quickly and so strong they had to scratch the flight after all the women had boarded all the planes and they were on the runway about to take off. Organizers believe the record will fall either Friday or Saturday. The event continues through Sunday at the Perris Skydiving Center. If you’ve never seen a sea of pink before, you might want to stop by.