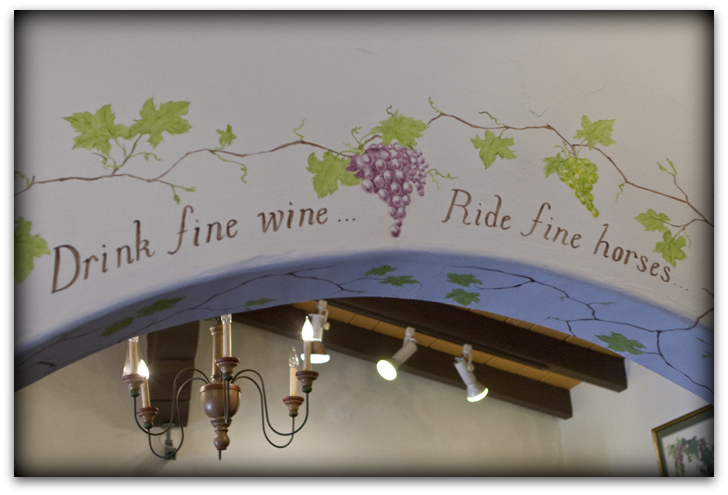 Yes, Virginia, There Are Wineries In San Diego There’s a common misperception that the Southern border of California’s Wine Country is Santa Barbara. It’s frustrating to those who have wineries in the Temecula Valley, but it’s especially galling to winery owners in San Diego. After all, San Diego is where the California Wine industry got its start.

I met with William Holzhauer and Tammy Rimes in the tasting room for their Hacienda de las Rosas Winery in San Diego’s Old Town. They love to share not only the history of their winery, but also the history of California’s wine industry. From 1769 until the 1820s, California was exporting wine to Spain. It created such a plunge in sales for Spanish wines that the King of Spain proclaimed a moratorium on new vineyards in California. No one paid any attention to his proclamation.

Father Junipero Serra planted the state’s first vineyard at Mission San Diego. He planted grapes at eight more missions, and over the years Napa became regarded as the star of California’s wine regions and San Diego became not much more than an afterthought.

It might interest you to know there are nearly sixty bonded wineries in San Diego County. William and Tammy got into the business because they wanted to combine their passion for horses and wine. They found property in the town of Ramona in 1998. Tammy begins the story by saying it all started with 600 dead apple trees. The property was perfect the their Peruvian Paso Horses, but they weren’t sure what to do with all those dead apple trees. They decided to tear them out and plant grapes “for fun”. For eleven years, William has been making wine. He took viticulture classes at UC Davis and took some apprenticeships with local winemakers, learning each had their own style. A year ago April they opened their tasting room in the Fiesta de Reyes Plaza in San Diego’s Old Town. You notice the marriage of horses and wine immediately. There are pictures of horses throughout, there’s hay on the floor, horseshoes in the barrels and carved horses on the bar. Most of their wines are named after their horses: their Petite Sirah is called “Sombra”, Spanish for shadow, “Oro” (gold) is their Chardonnay and their Tempranillo is “Vistoso” (with vigor). I tasted the ’02 “Primera Rosa”, a blend of 73% Cabernet Sauvignon and 27% Petite Sirah and the ’06 “Maximus” Merlot. He is also producing a wine from California’s fist grape, the Mission Grape.

The wines are quite good, but it’s the whole package that makes Hacienda de las Rosas special. Tammy says they don’t sell wine (they do), but they sell stories and the experience. The plaza features several Mexican restaurants as well as curio and specialty shops. William and Tammy are active in promoting San Diego wines. They belong to the Wine Institute as well as the Farm Bureau, the San Diego Vintners’ Association (William is vice president)  and the California Association of Winegrape Growers. This year they partnered with three other wineries to make a summer passport, encouraging visitors to try other San Diego wineries. On Fridays they host a certified farmers market from 10 – 2. Last year they presented the first ever Old Town grape stomp during harvest, with Tammy playing the role of Lucy.

Hacienda de las Rosas has become home to several social groups, including book clubs, attorneys and cigar afficionados who gather there regularly to enjoy a glass of wine and conversation. Each month different local artists are featured in the tasting room. Winding up a day in Old Town with a visit to Hacienda de las Rosas is something I would highly recommend. If you enjoy cigars, do what William and I did – head over to San Diego’s first cigar store, Racine & Laramie for a smoke.