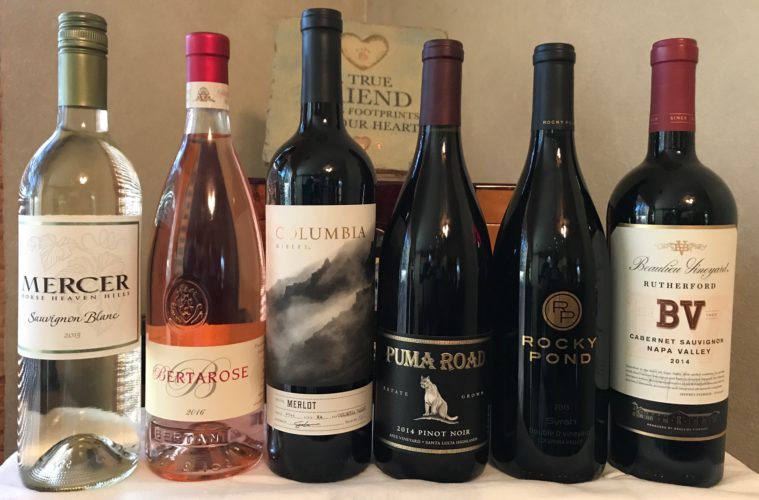 A strange thing happened on the way to the printer. When I pulled out the tasting sheets for the evening’s wine tasting, I found they had printed on the other side of a set of tasting notes from April. Allow me to take you back to a time when high temperatures were in the 70s and 80s as opposed to the 90s and 100s. We met at Ken and Taryn’s for another get together with wine, friends and food.

First up was a Washington state wine, one of three that night. Mercer’s 2015 Horse Heaven Hills Sauvignon Blanc was a hit with the group. Jean liked the hints of grapefruit and pineapple and called it crisp. Kat “really liked it” and said it was well-balanced at a great price. Ken thought it would pair nicely with light cheeses. At $14, it scored a solid four out of five stars.

We tasted the Bertani Bertarose 2016 rosé from Italy. Known as one of the Veneto’s most renowned Amarone producers, this gorgeous pale pink rosé is a blend of Molinara and Merlot. It has strawberries on the nose and a long finish. Kim called it a great warm weather wine at a great price. Al said it was a wonderful value at $12. Kat loved the color and the nose. It was a hit, scoring better than four stars.

Columbia Winery’s 2014 Merlot from Washington’s Columbia Valley was next. Al L. found it fruit forward and a bit light. Kat said it was smooth and easy. Brian said it “tastes like it costs more” than $16 and that it smelled like stewed prunes. Kim called it a nice wine at a good price. Jean felt it needed a bit more time in the bottle. It scored just under four stars.

Puma Road’s 2014 Apex Vineyard Santa Lucia Highlands Pinot Noir was next. From a winery on the site of a cattle ranch before the turn of the 20th century, Puma Road produces about 30 vintages and varieties at one time. Brian noticed a pronounced cherry nose, with a sweet and tart palate. Al G. simply said it was very nice with a big cherry finish. Kim found it spicy. Jean loved it, but said she felt another year would benefit it. At $45, some thought it was overpriced. It averaged about four point two stars.

The evening’s final offering from Washington State was the 2015 Double D Syrah from Rocky Pond. The vines for this wine grow 15 miles southwest of Lake Chelan along the Columbia River. 100% Syrah, it’s aged in 100% new oak, 50% French and 50% American. I liked its punch you in the face nose of blackberries and found it quite food-friendly. Jean enjoyed its deep, rich color and said it was peppery with gentle tannins. Kim got brown sugar on the nose and thought it would “grow up and be impressive.” It scored nearly four and a half stars and it sells for $39.

We ended with a visit to the Rutherford district of the Napa Valley, tasting the 2014 Beaulieu Vineyard Napa Cabernet Sauvignon. Al G. tasted deep black currant and thought the finish was lovely. Jean loved the berry and added “BV is always consistent.” Kim said it definitely had Rutherford Dust. Our anonymous taster said “A classic! Give this wine a few more years and wow!” Kat called it an almost perfect Cab. At $42, it scored better than four and a half stars.

Tom Plant launched WINEormous in 2009 and is a member of the International Food Wine and Travel Writers Association. Based in Temecula, California, he offers intimate winery tours for no more than seven people. Tour details and pricing are available at www.temecula-tours.com. Call now to book your Temecula Winery Tour at (951) 907-9701. Ask about special discounts. WINEormous is the recipient of the Wine Tour Operator of the Year award for 2017 from the UK’s Luxury Travel Guide.