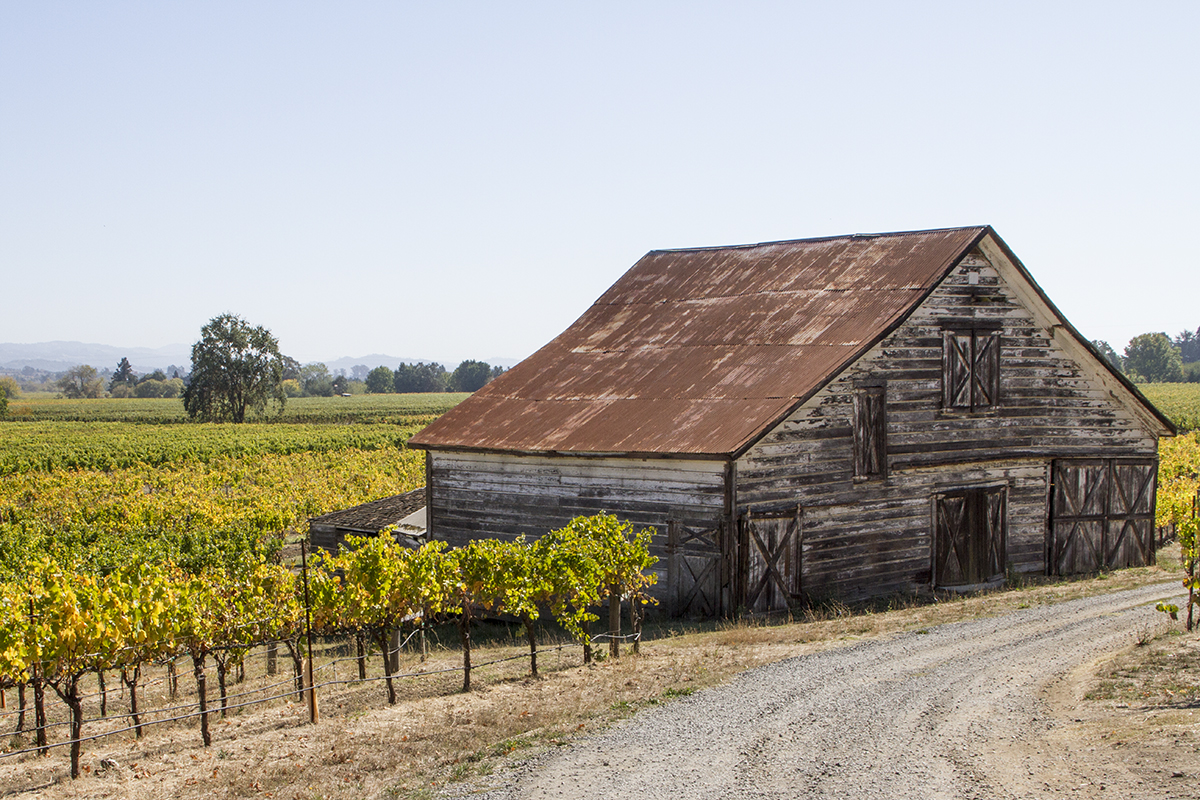 Morning dawned at Healdsburg’s Grape Leaf Inn and I headed down the Victorian staircase to see what awaited me at the dining room table. I met with other guests visiting from around the country; Texas, Georgia and other states. Breakfast consisted of a beautifully plated sliced orange with a rosemary sprig, pancakes with blueberry compote and a shirred egg with sausage. The accommodations and service are impeccable and I love the downstairs “Speakeasy” wine bar. Fueled and ready to go, I steered the winemobile to my first stop of the day, Mauritson Wines.

I received a warm welcome from Leigh Behrens who made certain I tasted everything on the list and then some. The 2012 Sauvignon Blanc was a nice way to start the day, crisp and bright. I also enjoyed the lightly oaked 2012 Chardonnay as well as two Zinfandels, a Malbec, a couple of Cabernets, the “Buck Pasture” red blend and a Pinot Noir. Mauritson opened its doors in 1998 and a stop is definitely in order next time you’re on Dry Creek Road. Diane and Ken Wilson own the Wilson Artisan Wineries as well as the Grape Leaf Inn. There are eight wineries all totaled and I visited three of them, starting with Matrix Winery. Formerly Rabbit Ridge Winery, the Wilsons purchased the property in 2007. Diane is the winemaker for Matrix and Pinot Noir is the varietal Matrix is best known for. One of the first things to impress me was the fact they offer their tastings in Riedel stemware. I started the morning with the 2011 Russian River Valley Chardonnay and proceeded to taste five Pino Noirs, three of them reserve wines. Matrix reserve wines spend 18 months in barrel. Pinot is one of my favorite varietals and these were exceptional, delicate and complex expressions. My tasting also included a Zinfandel and a Petite Sirah/Zinfandel blend. Matrix is off the beaten path and you really feel like time stands still when you do a tasting there. Pezzi King Vineyards is has a tasting room in Healdsburg, but I visited the vineyards and winery perched high above the Dry Creek Valley. This 137 acre estate offers spectacular views with 65 acres planted to Zinfandel and Cabernet Sauvignon. When the Wilsons purchased the property, the retained both the Pezzi King name and winemaker Chris Barrett. My hostess presented me with a 2012 Chardonnay from Bacigalupi vineyard paired with a triple creme. It was a match made in heaven. Next was the 2009 Cry Creek Valley Reserve Estate Cabernet Sauvignon. Soft and round, this wine was well-balanced with silky tannins. Pezzi King is known as a Zin house and were the next four wines I enjoyed: 2011 Oakey Grande Zin, 2011 Elevation Zin, 2010 Reserve Serracino Zin and the 2010 Reserve Row 14 Zin. All were fruit forward with brilliant color. The Serracino is made with 100-year-old vines and has Chardonnay, Muscat and Montepulciano in the blend. Last up was the 2010 Royal Rot late harvest Sauvignon Blanc, a Botrytis wine and sweepstakes winner in the Santa Barbara wine competition. All in all it was an ideal and relaxing way to spend an hour. After winding down the mountain, I made my way back to the eastern side of Healdsburg and Soda Rock Winery. If you visit, you’ll probably be greeted by Grace Ormsby. Lucky you! Grace knows the history of Soda Rock forward and backward and loves sharing its colorful past. Soda Rock used to be the Alexander Valley general store and it dates back to the late 1800s. Two of Soda Rock’s wines, the Meeks Merlot and Wentworth Zinfandel are named after people who played a prominent role in the area’s history. The Wilsons purchased the winery in 2000 and made several improvements while being careful to retain the building’s past. On the far wall is an enormous image of a woman’s face, an actress that Ken Wilson says reminds him of his wife. Cabernet Sauvignon is king at Soda Rock, but they have an extensive collection that includes Sauvignon Blanc, Chardonnay, Merlot, Primitivo, Cabernet Franc and others. I particularly enjoyed the 201 Entourage, a blend of Zinfandel, Grenache, Petite Sirah and Syrah. For dinner it was some grilled peppers and a burger at Healdsburg Bar & Grill. Owner Douglas Keane is the winner of this year’s Top Chef Masters and I sat on the patio overlooking downtown Healdsburg while savoring his tasty food.  On the walk back to the Grape leaf Inn, I reflected on this wonderful two-day visit to Sonoma County and started looking forward to my next visit, hopefully next year.