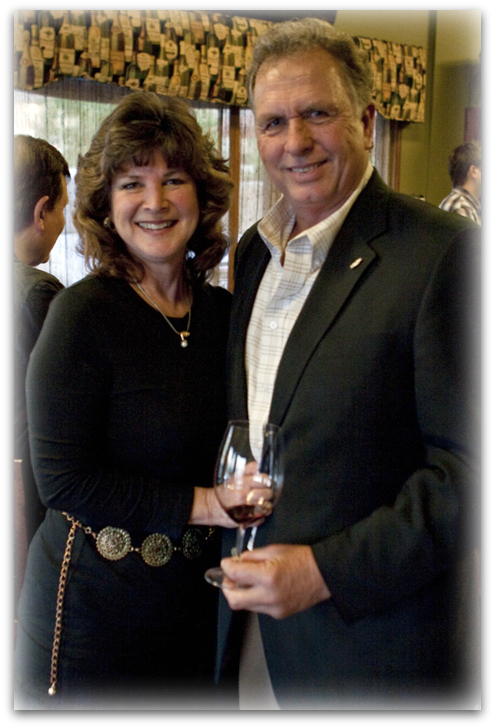 Dan Atwood launched the Counter Club at the Wine Company in Temecula several months ago. His idea was to have his distributors bring in a selection of wines and let his customers, for a nominal fee, taste the wines with him, waived if you purchase any of the wines presented. It’s been a runaway success. I’ve only missed a few of these events and yesterday’s raised the bar to a new level. Les and Dorian Linkogle, the owners of Briar Rose Winery stopped by with a generous sampling of their wines. They brought former Major League baseball player and all-around character Jay Johnstone with them. Les stepped behind the bar and one by one, told us about his wines as he poured them for us to taste.

There’s one trait I have noticed that is shared by every good winemaker I have met – passion. Les exudes it. He is proud of his wines and describes them not only in glowing terms, but explained what goes into making each one in a way that could be easily understood by both novices and wine connoisseurs alike. The tasting began with his Citronier, a Viogner infused with lemon concentrate. Les says he designed it to be enjoyed by the pool and explained you can add all the ice you want to it without diluting the flavor. It has a beautiful citrus nose and a nice mouth feel. It really is a great summer wine.

We then tasted two different bottlings of 2004 Petite Verdot. The first was the holiday edition, released in December 2008. This was a second press wine, and although I liked the nose, I felt it was a bit harsh in the mouth. We then moved on to the same wine, but from the first press. This is a lovely wine with a great nose, well balanced and a nice finish. It’s unusual to see Petite Verdot as a stand alone varietal. Les says because the fruit is so low in acid, it’s extremely difficult to get it properly balanced. He has succeeded brilliantly.

We were far from finished. Les moved on to his Cabernets, the flagship of his line. We started with the 2004 Cab (Jay Johnstone’s favorite). Les’ Cabs spend around 36 months in French oak, but somehow they’re not overly oak-y. The nose is dark berries, the balance is fabulous, what a great wine. The 2007 Cab is a monster and is only going to get better with age. Les says he’s going to pull it off the market for five years before making it available again. There are only about 30 cases remaining. He then went out to his car and came back with a bottle of his ’03 Cab.  His wines are a wonderful representation of what can be done in Temecula. His wines command a high price, but when you hear about the $1800 barrels he uses for aging and the amount of juice he throws away so he’s using only the best, it’s easy to understand. I’m a big Zinfandel fan and Les’ ’07 Katrina Zin is magnificent. The nose is everything I hope for in a Zin and the wine is very fruit forward without being over the top. We also tasted the ’05 Sangiovese, and it, too hit all the right notes. Les then unveiled his newest creation: Fumé Rosé. This yet to be released wine is 100% Sauvignon Blanc, but is the color of a rosé because it spends time in barrels that were used to age Cabernet. This is a dry, crisp rosé which is a joy to drink.

If you’re in Temecula on a Tuesday afternoon at 4:00, do yourself a favor and stop by The Wine Company and join them for the Counter Club. I doubt you’ll regret it. The Wine Company is located at 29073 Overland Drive in the Olive Garden Plaza. (951) 308-1150.