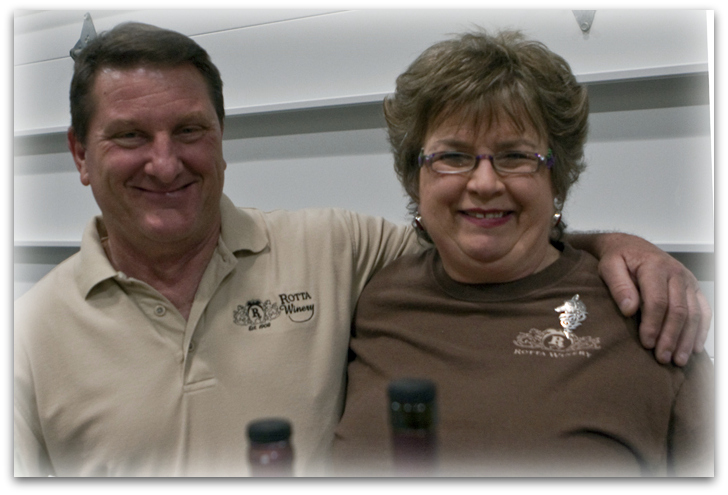 It somehow seems each time we visit Paso Robles we enjoy ourselves more than the time before. This visit was no exception. Starting with dinner with friends Thursday night, we visited wineries Friday and Saturday and savored all that is Paso Robles. Sunday morning began with a visit to Hoover’s Beef Palace in Templeton. We first dined at Hoover’s last year and this was our third visit. The food is delicious, the portions are humongous and the atmosphere is, well, unique. Laura ordered the French Toast with fresh blackberries, Denny & Jodi shared a Chili Verde omelet and both had more than enough to eat and I ordered Mark’s Mean & Meaty omelet. I’m not exaggerating when I say I ate less than a quarter of it and couldn’t squeeze in one more bite. Candy, Mark’s wife threatened to make me wash dishes as penance until she saw we were taking the rest with us. We went straight to Rotta Winery where we were reunited with our new found friend Gail who poured for us while we visited with owner Mike Giubbini and co-owner and Winemaker Marco Caporole. Over the course of two hours, we tasted everything on the menu plus two barrel samples Marco brought out – the 2006 and 2007 Estate Cabernet Sauvignon. Marco asked if I could look forward, realizing both wines were young and needed more time before they were “ready”. I assured him I could and sampled both. The ’06 is very close to being finished and shows tremendous promise. The color on both wines is deep and intense. The ’07 was quite cold, so Marco and I took turns warming it up in our hands until the nose appeared. It was worth the wait. The ’06 will be released later this year and the ’07 should be available sometime next year. Marco also gave us advice and how to drink both of his late harvest wines. For the late harvest Zin he recommended holding it between the tongue and roof of the mouth until you could taste the skins. For the Black Monukka he advised letting it rest on the back of the tongue until the caramel flavors became apparent. The difference in both cases was truly remarkable. Rotta is becoming one of our favorite places to stop in Paso Robles. If you visit the tasting room, make sure you ask for Gail. She’s a doll. Just down the road from Rotta is Turley Wine Cellars. Turley has earned a reputation for producing some of the finest Zinfandels anywhere. We arrived, got our glasses and headed for the barrel room. Carl poured us barrel sample of two of the ’08 Pesenti Vineyards Zins… one from Old Vines and the other from Young Vines. There was a night and day difference between the two. Both are still very young as they are still in barrel, but show tremendous potential for becoming excellent Turley Zins. Since we last visited Turley in October, they have opened a new tasting room and it is stunning. We tasted a few more Zins and then went out on the patio for some wood oven pizza.

Paso Robles holds a special place in our hearts and we always look forward to our next visit. Our thanks to the great folks at the Paso Robles Wine Country Alliance for their assistance during a very successful Zinfandel Festival. Carl in the barrel room at Turley Cellars