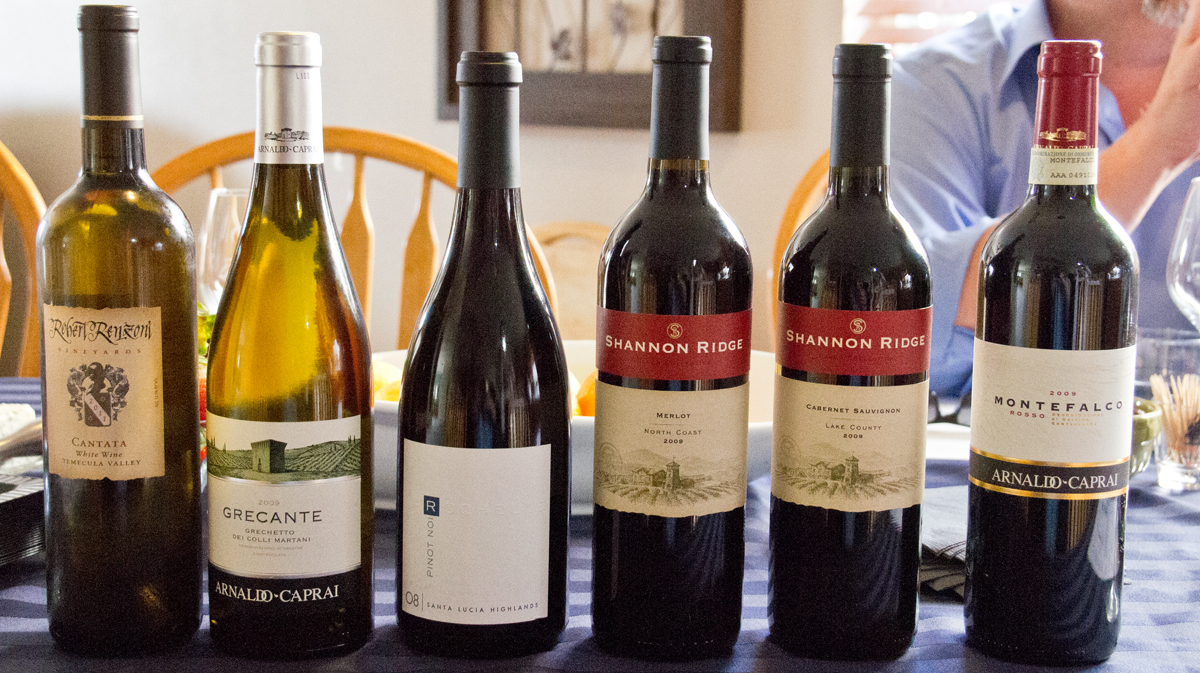 A week rarely passes where I don’t get together with a group of friends to taste some wine. Tasting great wines should be reward enough, but I’m so grateful for what I didn’t anticipate. People I liked before have become even closer friends. For a few hours we unwind, sip some wine, eat a bit and get to know each other just a little better. In vino veritas indeed. We gathered in April for a tasting of six wines, beginning with one from the Temecula Valley, the 2011 Robert Renzoni Vineyards Cantata. A blend of 60% Pinot Grigio and 40% Viognier, all of us enjoyed it. I thought it had a pretty nose, others detected apricot and citrus. Michael was impressed with the acidity and Andrew felt both varietals displayed well. All of us would buy it at $20 and with summer lurking, I’m sure many of us will.

With the second wine, I felt like I was back in Italy. We sampled the 2009 Arnaldo-Caprai Grecante, made from the Grechetto grape. I drank this wine in January at the winery and it brought back fond memories.For the majority of the group, it was their first time tasting Grechetto and I have a feeling it won’t be their last.  Amy loved the nose saying she detected Absinthe and I picked up licorice. Most of us thought it was refreshing, but perhaps a bit overpriced at $20.

All of us looked forward to the next offering, the 2008 La Rochelle Santa Lucia Highlands Pinot Noir. Michael called this “a Pinot for Cab lovers and I like Cab.” Amy loved the color, mouth feel and flavor. Ken commented on the garnet color and full nose of raspberries and dark cherries. It’s a big Pinot and all but one on the panel thought it was a good value at $38.

We tried two offerings from Lake County’s Shannon Ridge Winery. First was the 2009 Merlot. Most of us struggled with the nose. Those of us who did detect one found it mostly nondescript. Ken noted flavors of dark cherry and plum on the palate. None of us were excited by this wine nor would any of us pay $19 for it. Next was Shannon Ridge’s 2009 Cabernet Sauvignon which didn’t fare much better. I picked up hints of cherry on the nose. The rest thought is was “ok.” It didn’t have any takers at $19.

Our last wine was another from Arnaldo-Caprai, the 2009 Montefalco Rosso, a blend of Sangiovese, Sagrantino and Merlot. I tasted a lot of Sagrantino earlier this year in Italy and tasted this wine at the Caprai winery. The deep red color struck all of us. It exhibited an old world nose with black fruit and plum. A few felt this wine was still very young and would benefit from cellaring, although all of us felt it was drinking well now and that it had a wonderful lingering finish. At $23, I think it’s a bargain.