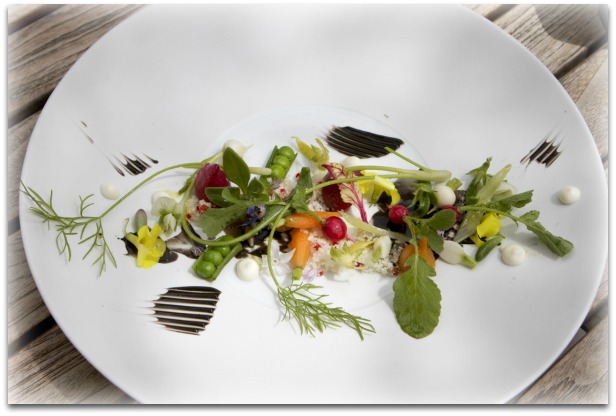 Napa and Other Points North A funny thing happened when I returned home from Paso Robles, Napa, Sonoma and Marin, but more about that later. When I got an invitation to attend “The Todd” Anderson’s Spring party at Conn Valley Vineyards, I decided to plan a road trip. Our first stop was Paso Robles, the first wine country destination we visited before launching WINEormous and to this day one of our favorites. One of the best tips I ever got was that we should check out Fratelli Perata Winery. It was one of our first stops in Paso and remains one of our favorites. We had a great visit with Carol as I tasted through their exceptional lineup and had a chuckle as she showed us the wine defects wheel. We tasted some outstanding Pinot at Windward Vineyard and then wrapped up our afternoon at Rotta Winery. We called it a day early, because we were leaving at the crack of dawn for a stop at the iconic French Laundry. We sat in the courtyard as we waited for Tucker Taylor, the Laundry’s Culinary Gardener. Tucker has managed the gardens for four and a half years now. After managing a farm outside Atlanta, he was ready to move west and heard that Chef Thomas Keller was looking for a gardener. The two met, an instant bond was forged and Tucker has been in charge of the two and a half acre garden ever since. When Keller is traveling, he’ll often send a text message with a photo of a plant he’s never seen before. Just last year he sent his gardener a photo of a plant he saw in Lyon, France called oyster leaf. Taylor knew by looking at it that it would taste like oyster and he was correct. He’s passionate about what comes out of the garden and prides himself on producing the smallest vegetables he can. He’s in constant collaboration with the chefs at The French Laundry and wants to make sure what you see on your plate is absolutely the finest possible. He says the garden is an extension of the restaurant and he welcomes the public to come visit. We visited next with Chef de Cuisine Tim Hollingsworth. Hollingsworth has been with The French Laundry now for 11 years. He told us he ” showed up at the back door and kept harassing him.” Thomas Keller finally relented and Tim worked his way up from the bottom to where he is today. He says the menu has evolved tremendously since he began working there. The food was simpler when he first started and now there’s much more of a focus on the garden. The seasonal changes, he says, must be seamless. Dinner at the restaurant is a nine course affair, not including canapés. The butter they use is made exclusively for them on a farm in Vermont. The standards for all menu items are exceptionally high. When your guests are paying $275 a head, he’s aware you’d better deliver. The kitchen employs 30 chefs, all of whom have undergone extensive training. He hopes his guests leave excited and with fond memories, something they can relate to and even laugh about. Before we left, he prepared a salad for me to photograph. Alas, before I could dig my fork in, the plate was whisked away. We stopped for lunch at Hurley’s in Yountville (killer Fish ‘n Chips) and visited with good friends Andrew and Marshall of Wine Soirée fame. I find it nearly impossible these days to stop in the Napa Valley without visiting friend and renowned winemaker Kirk Venge. His dad Nils was the first American winemaker to get a perfect 100 point score from Robert Parker, Jr. and Kirk’s own Venge Vineyards has received a 99 point score from Steve Heimoff for his ’08 Family Reserve Cabernet Sauvignon. We did some tank and barrel sampling in his immaculate barrel room and then adjourned to the tasting room to sample his latest offerings. I think Kirk is producing some of the finest wines coming out of the Napa Valley these days. As the day was drawing to a close, we made a final stop at Quintessa. A visit to Quintessa is a most memorable experience. Not only did we taste their amazing Cabs, we started with their Sauvignon Blanc bottled under their Illumination label. Crisp with mineral notes, I really enjoyed this surprising wine. Since Laura is no longer drinking, our gracious hostess went to the back and reappeared with a cappucino for her. We moved on to the Cabs, and as luck would have it, not only were they previewing the as yet unreleased 2009 vintage, they had bottles of the ’97 and ’05 open as well, so I tasted a vertical of ’97 and ’05 – ’09 Quintessa. Truly stellar. Tasting is $65, but trust me, it’s worth every peny. Other highlights of this great trip were a stop at Artesa in the Carneros region and a visit with winery President Keith LaVine. Keith took me on an incredible tour of this stunning facility winding up with a tasting. I loved their spectacular Pinot Noirs and Albariño. We enjoyed a picnic lunch with scrumptious sandwiches from Sunshine Market in St. Helena at Titus Vineyards. We stopped at Fairchild Estate and visited with owner Lawrence Fairchild as we nibbled on grapes and cheese and tasted his astounding G-III and Sigaro Cabs. We drove to Santa Rosa and met with Brett Raven, owner and winemaker at Frostwatch Vineyard and Winery. I was blown away earlier this year by a barrel sample of his 2010 Pinot Noir, so we stopped by to pick some up and taste his Chardonnay and Merlot. Put this winery on your radar. We stopped by The Cheese Factory in Petaluma, open in the same building since 1865, purveyors of the dangerously good Rouge et Noir line of cheeses. As I mentioned at the start, a funny thing happened. When I returned home, I slipped and fell on a hardwood floor and ruptured the quadriceps in my left leg. I’m recuperating well from surgery, and look forward to being back on the road in the near future. Until then, cheers!