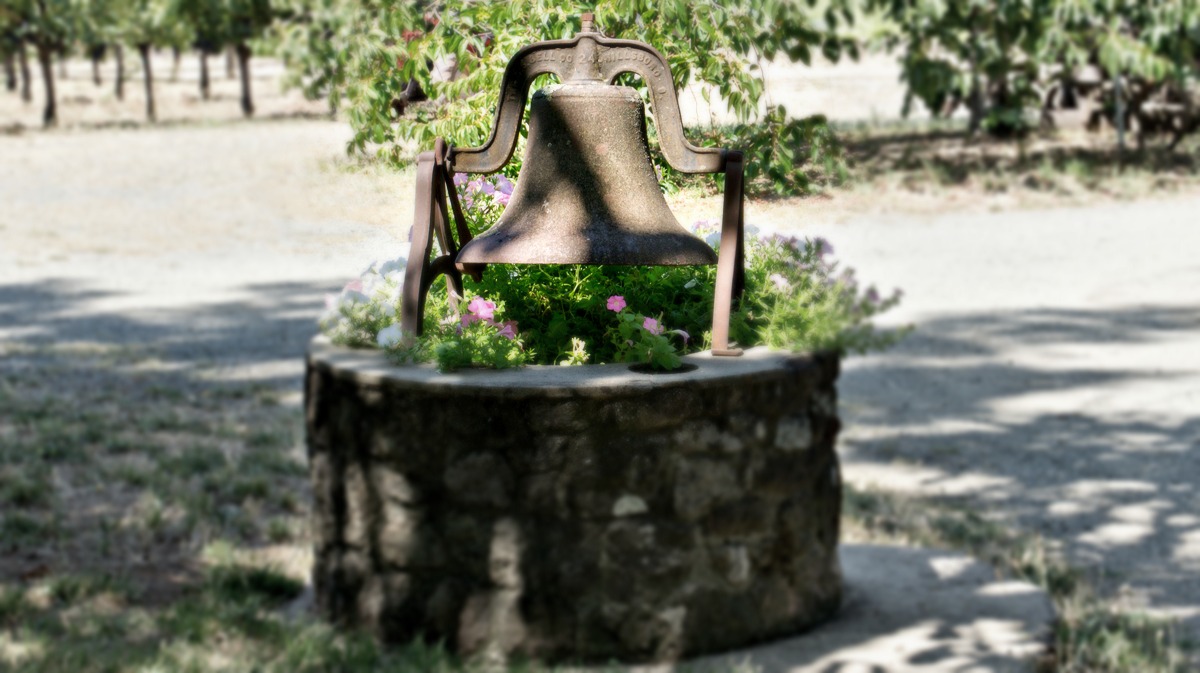 On a recent visit to Orange Coast Winery, I was having a conversation with someone about the Napa Valley. The man I was speaking with told me on my next visit I had to stop at Arns. He went on to sing the virtues of this boutique winery, and intrigued, I sent off an email and asked if I could come visit. A few weeks later, my friend Chef Frank Miller and I wound our way up Deer Park Road and after a few turns and a drive down a long dirt driveway, we arrived. Arns is a beautiful property, tranquil and well off the beaten path. There are flowers and gardens and a few buildings. The only problem was we had no idea which one was the winery. After knocking on the 3rd door, owner/winemaker Sandi Belcher greeted us.

She shared the history of the property with us. The property was homesteaded by a German man in 1869. He planted Zinfandel and erected a couple of barns. In 1912 a stone mason named Skretting bought the property and quarried stone from it. Skretting did a lot of stone masonry around the Napa Valley including the now closed caves at Christian Brothers and he was the head stone mason at what is now the Culinary Institute of America. The property was abandoned for a time when Robert Arns, a chemist from MIT, moved his family to Berkeley to run the west coast division of Ortho. He bought the property as a weekend getaway and in 1967 he began the replanting of grapes. Skeet shooting was an event the family enjoyed. Recently, Sandi took a stack of clay pigeons, put them in the dishwasher and served the family dinner on them. John’s wife Eloise exclaimed “We used to shoot those with guns!” Eloise, now 93, is an avid golfer, but Sandi says you’d best not play slowly in front of her. “You’ll hear her bitch all night.” Sandi’s husband John Arns graduated from UC Berekeley with a degree in sculpture and art. He then went on to study viticulture and oenology at UC Davis. The two eventually crossed paths and John is the viticulturist and Sandi makes the wines with her daughter. Sandi’s career in winemaking started in 1972 at Long Vineyards where she made sparkling Shiraz, barrel fermented Chardonnay and she was the first person to produce a stand alone Pinot Grigio. Renowned Chef Michael Chiarello served her wines when he was at Tra Vigne. John and Sandi wound up planting 10 acres of some very special Cabernet Sauvignon on the property. The vines they planted included Caymus Special Selection, Shafer Hillside, clone 337 and some cuttings from Bordeaux they acquired from Duckhorn Vineyards. Their first release was in 1992.

With both husband and wife in the wine industry, “everywhere we go it’s always winemaking.” They visit Australia at least once a year and Sandi consulted for vineyards and wineries in Thailand and China. She finally persuaded John to visit Thailand after she had visited over a four year period. His first question was “Can we move here?” When asked if she crafts her wines with food in mind, her response was that everything’s for food. If not, why bother. Sandi does a lot of consulting and gets a few interesting requests. One woman told her she lived in Bel Air, had three Maseratis, but didn’t have her name on a wine bottle. Sandi passed on that opportunity. Her Cabernets are brilliant expressions of the varietal. Her biggest distributor in in Munich and her Cabs are the only California wines on the list of two three star Michelin restaurants in Vienna and Berlin.

We sat and tasted her 2007 and 2008 wines. It was a wonderful way to cap off a memorable, but much too brief visit. I look forward to returning soon.