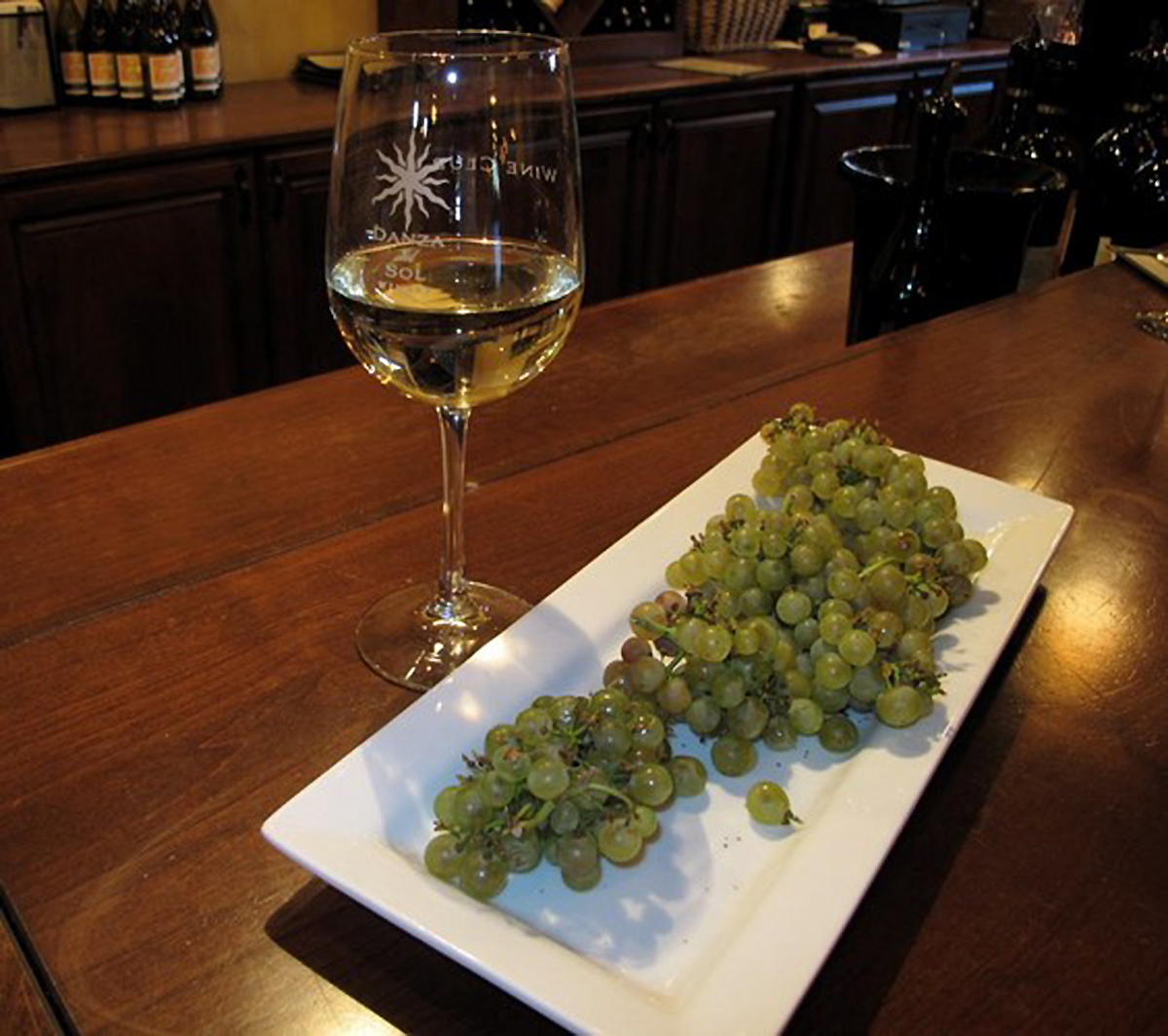 With a picturesque backdrop of the sun setting over rolling vineyards, Danza del Sol Winery hosted its second in a series of “Get Sauced” cooking classes. While the first class featured Italian-themed sauces, last week’s class featured BBQ sauces. About 50 or so participants were thrilled to be learning new approaches to their late summer cookouts. (While summer may be waning in much of the country, in the Temecula Valley Wine Country, where Danza is located, summer just goes on and on. In this southern California area, almost every night of the year is perfect for a cookout.)

The classes are held in Danza’s spacious new Club House at the top of a hill behind the winery’s tasting room on De Portola Road. The undeniable star of the evening was Chef Martin Corso, best known for his catering company, The M Group, which also offers cooking classes. Chef Marty set the rollicking tone for an evening of wonderful Danza wines, innovative dishes, and lots of laughs and interaction with participants. Contagiously personable, Chef Marty delighted all the guests with his humorous approach to making a variety of tasty sauces. The concept for these highly popular “Get Sauced” classes was developed by Kelly Hefley, who is on the management team at Danza. She devised the clever play on words and has been very pleased with the reaction to the demonstrations. She says, “Everyone who has attended has raved about how much fun they had and also about the amazingly delicious recipes.” The recipes are printed out for everyone attending.

As guests gathered, they enjoyed refreshing sangria made with Danza sparkling wine. Last week’s three savory BBQ sauces were paired with some special Danza wines. The first sauce was a Golden Carolina BBQ Sauce that was served over tender baby back ribs. Some key ingredients in this succulent, spicy sauce were marmalade, Dijon mustard, cayenne pepper, garlic, and brown sugar. The next delicious sauce was a Raspberry Chipotle BBQ Sauce served over grilled chicken. Made from bacon fat, onion, chipotle peppers, raspberries, brown sugar, cinnamon, cider vinegar and other ingredients, this rich, deep red sauce had a sweet but zesty kick.

The final sauce was a Whiskey Bourbon Glaze that was drizzled over grilled peaches with a dollop of goat cheese. The result was a unique, scrumptious dessert with surprising spicy but sweet flavors that worked beautifully together.

The following ingredients were simmered for about 20 minutes to create this distinctive dessert sauce: Each wine was introduced by Sean Miller, the Tour Director at Danza. The ribs were paired with a 2010 Grenache, which had bright aromas of cherry and root beer and flavors of plum, jujube, and vanilla. The chicken was paired with a 2011 Rossanne, a Rhone varietal that had elegant aromas of tangerine and caramel and was rich on the palate with citrus flavors that went well with the raspberry chipotle sauce.

Danza’s winemaker is Mike Tangley who has been at Danza for more than two years and is producing some exceptional wines. He says, “I am looking to create wines that cannot be produced anywhere else and will be memorable to our customers.” Danza sits on 35 lush acres with eight of those acres full of the oldest Sauvignon Blanc grapes in Temecula.

Two recent participants, who have attended both “Get Sauced” demonstrations, confirmed what a great experience they had at both classes. John Kraxberger says, “Marty does a magnificent job of preparing and presenting the food in an interesting and humorous manner. These are fun and tasty evenings that are well worth the price. Sean also presents the wines beautifully.”

Another participant, Linda Milks, concurs. She says, “I love the way Chef Marty adds gusto and enthusiasm to his cooking demonstrations. He also gives you ideas on how to ‘mix it up’ by adding additional ingredients to his already wonderful recipes. The wines are also perfectly paired with the dishes.”