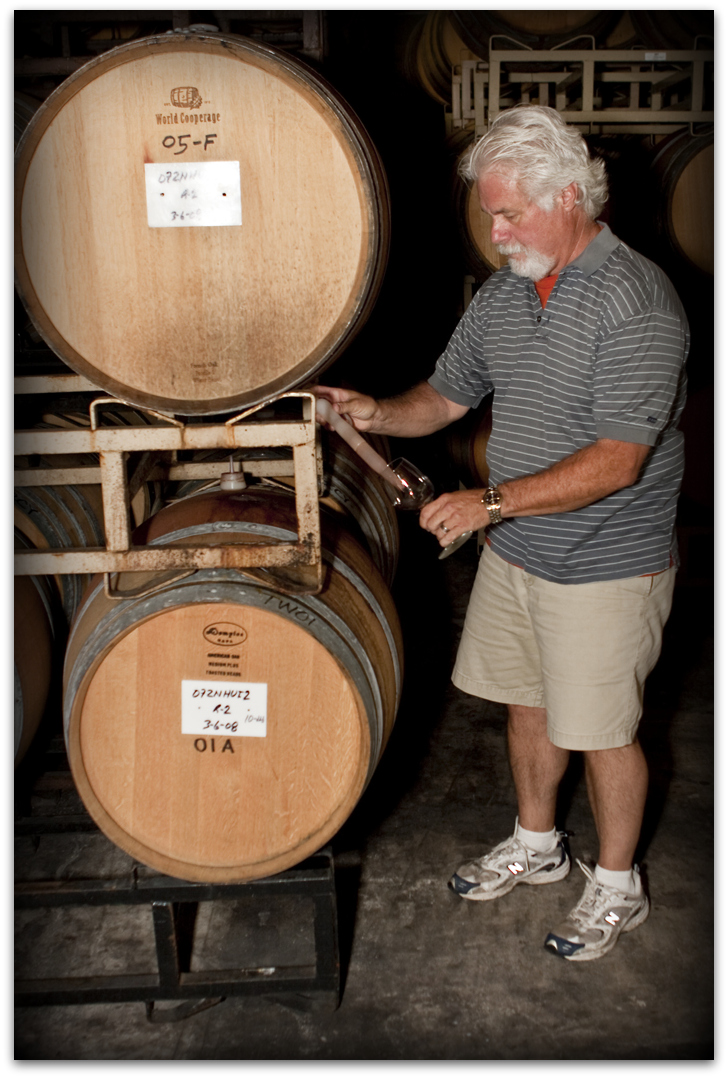 David Vergari – Taking Thornton Wines Into The Next Decade It will be a few years before you will be able to taste David Vergari‘s contributions to Thornton Winery. As Thornton’s new Executive Winemaker, Vergari comes aboard right at the peak of Harvest activity. David’s role now is to assess the wines that are in barrel and tank, make certain the vineyards are in good shape and primarily to create clear communications. “I need to communicate that this is what we’re doing, this is why we’re doing it, this is how we’re going to do it. Here’s the result we should expect to get.”

David has spent much of his life in Northern California in Sonoma County, but Southern California has been home to him for the past 11 years. He’s a graduate of both the UC and Cal State programs and has made wine on four continents: North and South America, Australia and Europe. Although he says there are cultural and slight technical differences, people have been making wine for thousands of years. “Those little yeast cells go in there and gobble up the sugar and create carbon dioxide, alcohol and heat. How simple can it get?”

He’s been aware of the Temecula Valley for about 25 years, having worked at the Hess Collection in the Napa Valley with assistant winemaker Tom Smith who had worked at Callaway. In 2007, Vergari starting judging wines and a quote from Joe Hart got his attention. He judged a wine competition in the Temecula Valley in 2007 and found some excellent wines that got him to start thinking seriously about the Temecula Valley AVA. He was beginning to see great potential in this valley. Like many other winemakers, he believes the key to making good wine begins in the vineyards. He’s a stickler for attention to detail and agrees with his predecessor that this area needs a viticulturist. He also believes that the area is planting more climate adapted varietals and more varietals that make sense for the region.

“I want to make wines that are varietally correct and wines with complexity on the nose. If they sound one note I want it to ring true and pure, but if it gets some other things going, so much the better.” A good wine, he feels, should be smooth, balanced and seamless. It was a joy to see his interaction with Cellar Master Arsenio Reyes. They seem to have a mutual respect and that can be key to a good winemaking team. When I asked him what brings him the most joy as a winemaker, he says it’s when he sees a pristine cluster of fruit and he knows all his hard work has paid off. “That’s the pinnacle. When you see that the wine starts to find its voice, that’s gratifying. You know you’ve done a good job.” He notes that he chose UC Davis because he learned wine theory there. Hands on experience can be learned in an internship. School, he believes, is a means to an end, not an end in itself. “Every place you go is a work in progress.” He likes the tight knit feel of the community here and looks forward to making a difference, by hopefully bringing something to the party. He quoted Kinky Friedman, if memory served him correctly who once said “You know what potential means in French? It means you ain’t done %#!@.”

Each month that passes in this valley gives me more hope that greatness is just around the corner. I believe David Vergari can help bring us closer.