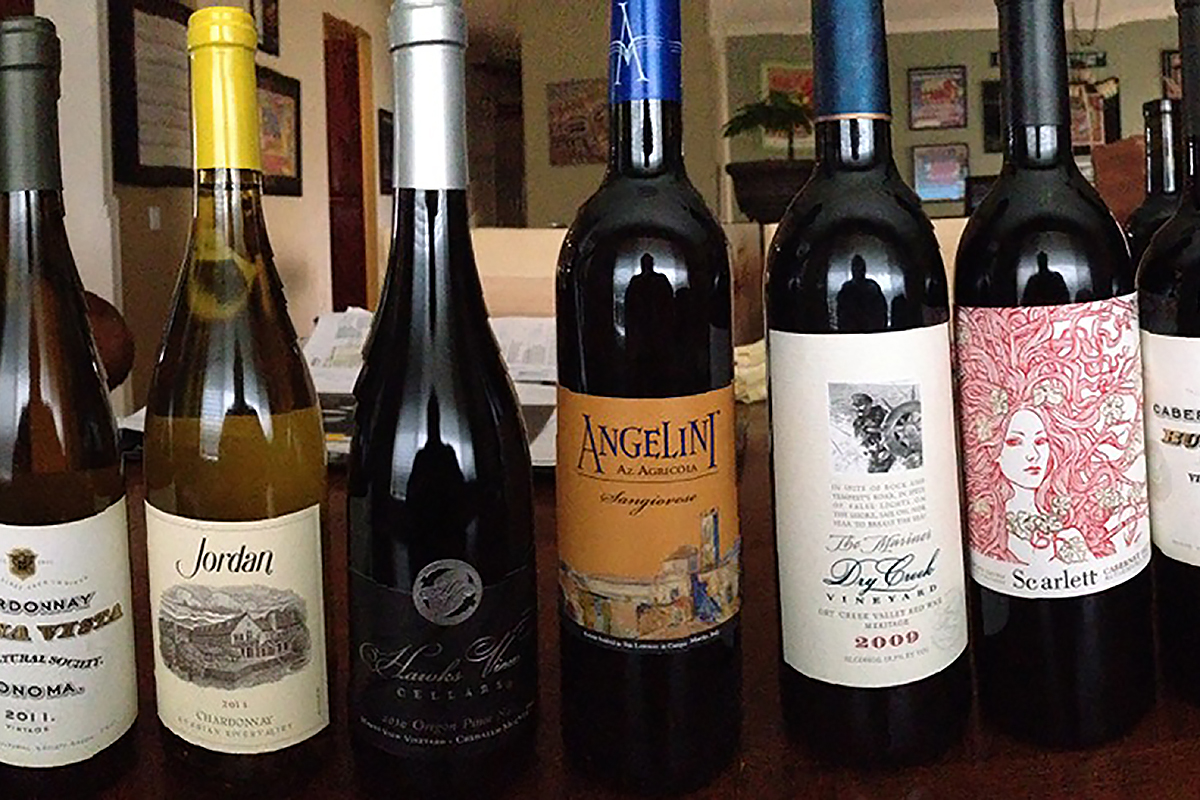 I recently received an email asking me if I’d be interested in learning about the wines from McGah Family Cellars. The McGah family co-founded the Oakland Raiders in the 1960s and have been producing premium wines in Rutherford. Intrigued, I said “sure” and rallied the troops once again.

We got together this time at Kim and Brian’s home. Meats and cheeses and various goodies were within easy reach and our mission this day was to taste nine wines. Speaking of the McGah family, we began with their 2011 1070 Green Sauvignon Blanc. Chris noted apples and citrus on the front and awarded it four out of five stars. Tony got a hint of pine on the palate and found it a very nice summer wine and a great value at $20. I loved the fragrant nose and lingering finish and the way it paired with smoked salmon. Right now if you purchase two Scarletts they will throw in a 1070 Green.

We continued our tasting with a 2011 Buena Vista Chardonnay from Sonoma. I really loved the nose on this wine as well as the mouthfeel. Tony thought for the price it was “awesome!” and called it a steal. Ken also found it a great value at $15. Nearly everyone really liked this wine.

Next in the glass was another Chardonnay, Jordan‘s 2011 offering. Robb enjoyed the style of this wine and like the notes of pineapple and honey and its complexity. Chris liked its fruit forward nose and smooth finish. Most of our group awarded it four stars, one gave it five stars and another gave it two. Suggested retail is $25.

Our group as a whole loves Pinot Noir, and I shared a wine I tasted this summer at the Wine Bloggers Conference in Penticton, BC, the 2010 Hawks View Oregon Pinot Noir. Tony weighed in with “Now that’s a Pinot!” I liked the classic, unmistakable Pinot nose as well as its balance and the way it continued opening up the longer it spent time in the glass. There were lots of ooohs and ahhhs around the table. No one gave it less than four stars and all found it reasonably priced at $38.

Next up we tried the 2008 Angelini Sangiovese from Italy. I liked its earthy nose and was pleasantly surprised by how well it was holding up.  I liked its balance and was amazed by how much it opened up after ten minutes in the glass. Ken liked the earth and leather on the nose and palate and we all thought it was a great buy for $15, a true no brainer.

The 2009 Dry Creek Vineyard “The Mariner” Meritage from Sonoma was the next wine in our glasses and the crowd went wild! Tony said “this is what makes my palate go wow!” Ken said “Christmas came early – cinnamon spice and everything nice.” I loved the nose and complexity and how well it paired with chocolate. This one garnered a lot of fives and it sells in the $35 range.

We tasted another Buena Vista wine, the 2010 Cabernet Sauvignon from Sonoma. Most of the tasters loved the nose, but felt it didn’t deliver on the palate. Tony felt it didn’t measure up to the wines that came before it, but loved how it opened up after half an hour and thought at $14 it was a great value. We returned to the McGah family and their 2010 Scarlett Cabernet Sauvignon. Ken described it with one word. Fabulous. Chris loved the balance of acid and tannins and its long finish. Its deep color, expressive nose and lingering finish impressed me. This is a Cab drinker’s dream and you’ll find it for around $60.

Our final wine of the evening came from Lake County, Shannon Ridge 2009 Petite Sirah. Its deep color is typical of the varietal and it tasted like a Petite Sirah. Ken was stunned by how good a $12 wine it was. Tony called it the sleeper of the night and an awesome value. Our work done for the night, we enjoyed each other’s company with a little more wine and food.