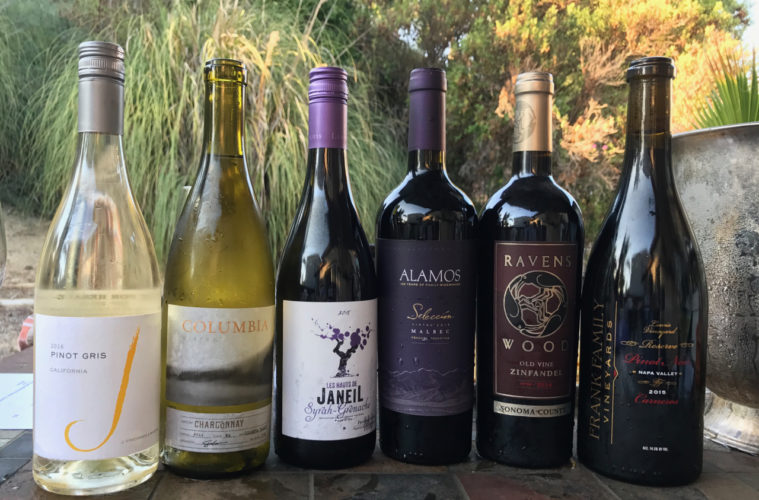 An intimate group numbering less than ten gathered a few months back tasting wines, sharing some sustenance and enjoying each other’s company. As I recall, a cigar or two may have been smoked. In a backyard in an undisclosed Temecula location, we set to the task at hand.

Pinot Gris and warm weather fit like hand in glove and we began with J Vineyards’ 2016 offering. Mark called it good and refreshing. Kathy said she liked the nice color as well as the wine. Lisa found it crisp with lemon and some peach while Ken also picked up apple and enjoyed its floral nose. At $20, it received a solid four out of five stars rating from the group.

We moved on the Columbia Winery’s 2014 Washington State Chardonnay. Kathy liked the nose, but got a little bite on the palate. Ken called it “buttery, very smooth and well-balanced from front to back.” I liked its round mouthfeel and found apples and kiwi on the nose. At $11 it scored around three and a half stars.

Next was the 2015 Les Hauts de Janeil Syrah-Grenache blend from France. Ken picked up big cherry and blackberry with some currant. Lisa said it was easy drinking and also noted cherry. Mark called it dry and nice. You should be able to find it for around $14 and it scored better than four stars. We headed south of the border to taste Alamos 2015 Selección Malbec from Argentina. Lisa loved it and called it smooth with dark cherries and light cocoa. Kathy enjoyed the dark spice nose and also thought it was very smooth. I loved the deep color and long finish. Kat simply said “my fave.” At $20 it scored nearly four stars.

Our last two wines hailed from Northern California, beginning with Ravenswood 2014 Sonoma County Old Vine Zinfandel. Lisa gave it a four star score and found sweet plum, blueberry and spice. Ken called it jammy, but I disagreed. I liked it bright cherry nose with notes of Zin on the palate. With a score of close to four stars it sells for $15.

We concluded the tasting with the 2015 Frank Family Reserve Pinot Noir from Carneros. One smell and I knew this was a classic Pinot Noir. Ken thought the nose was fabulous and said it was “everything a Pinot should be.” Mark said it was fantastic and Kathy called it “very yummy.” It sells for $65 and scored nearly four and a half stars.