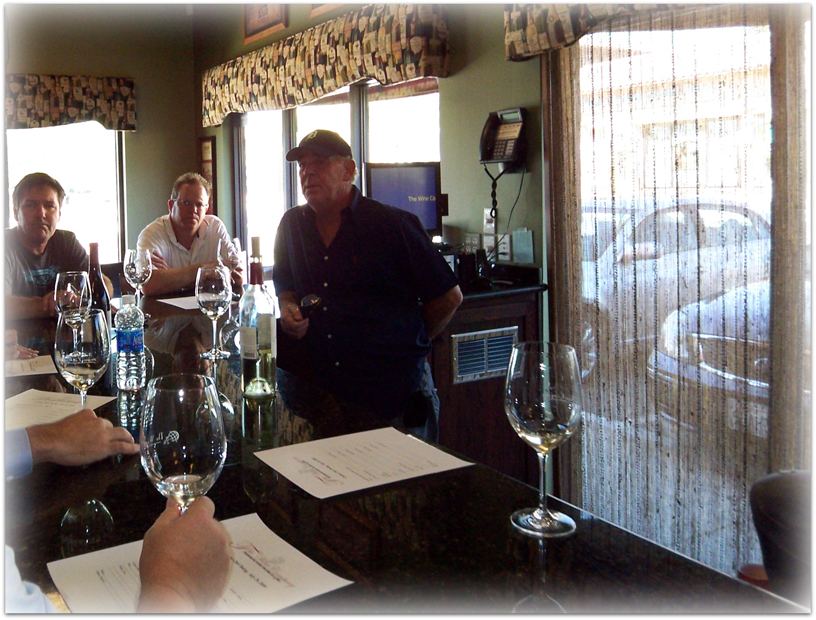 Dan Atwood has settled into his role as host of The Wine Company quite comfortably. The recent renovations are a nice improvement and things continue to improve under his guidance. Dan makes a point of spending time with his customers and making them feel at home. Yesterday he launched “The Counter Club”, a weekly gathering on Wednesdays where invited guests can join him in evaluating wines brought in by a different wine rep each time. It’s a win-win. Dan gets valuable feedback and his guests get to be in on the decision making process and buy wines at a great price.

About ten of us were on hand for yesterday’s inaugural gathering. Jeanette Treadway from Regal Wine Company had the honor of kicking things off and she did so with seven wines, starting with Kendall Jackson’s Grand Reserve Sauvignon Blanc. This wine is made from the top 1% of KJ’s grapes and is fermented in oak and stainless steel. The wine was clean and crisp, but to my palate, unremarkable. At $19, this is not a wine I could recommend. Things began to improve with the Los Alisos Chardonnay from Santa Barbara County. This was a great Summer wine, with a fresh citrus nose and a caramel apple finish. I would have no trouble paying $16 for this wine. The next wine we tasted was my favorite of the afternoon. The Novellum Chardonnay hails from France and it is delightful. Viognier lease is stirred in during fermentation. It’s crisp, fruit forward and complex and I look forward to drinking it again. I highly recommend it at $16.

The reds were up next starting with the Evodia, a big Garnacha from Spain. This one smacks you in the nose with big berry aromas. It had a true Grenache flavor and feel, but was a bit acidic for my taste. It did open up in the glass, and at $10 a bottle, I would recommend it in a heartbeat. I thought the notes on the back of the bottle were great: the who, what, when where and how – “remove cork, pour into glass (optional) and drink. I’m a sucker for a good sense of humor. We tasted another Spanish wine next, the Creta Roble Tempranillo. It presented an earthy nose with some blackberry and had a chalky finish. At $15, it was okay, but not one I would likely buy. We moved on to another Spanish entry, the Castell del Remei Cotim, a blend of 60% Tempranillo, 20% Cab and 20% Merlot. It had a raisiny nose and was definitely drinkable at $15 a bottle. The finale was the Prima Voce Super Tuscan from Tenuta di Arceno, a blend of Cabernet Sauvignon, Cabernet Franc and Merlot. There wasn’t much I liked about this wine. I found it to be extremely dry and acidic. It did improve after being poured through a Vinturi, but I was disappointed with it. That one was priced at $17.50.

All in all it was a fine afternoon and I look forward to an encore performance next Wednesday. Maybe I’ll see you there.