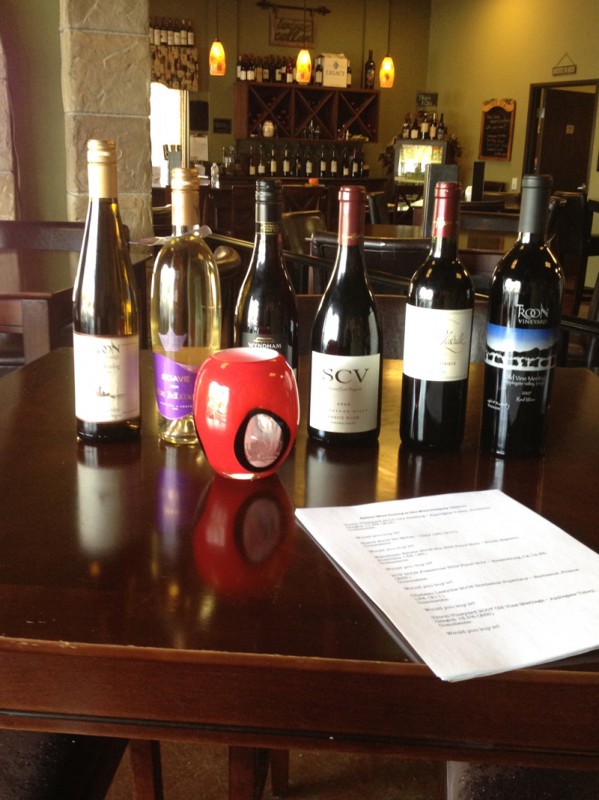 A Taste of Six Tasting wine is one of the things we do and just last week I called a meeting of my trusted companions at The Wine Company in Temecula and that’s precisely what we did. We tackled six wines one fine afternoon, starting in Oregon and working our way through Italy, Australia, France and California before finally winding up back in Oregon. Here’s what we thought.

I liked this wine and was captivated by the aroma of apples. Brights acids and a lingering finish. I’d buy it, as would two others who tasted it. A few others were put off by the nose. Mike thought it smelled of nutty oxidation. Michael thought the apple aromas were too much. Jack and Sue commented the nose was “funny.” One said they might buy it, another that they probably wouldn’t with the remaining seven saying they would pass on it.

“A pool/patio sipper” said Jan who found it light and easy drinking and a good value. I found it well balanced. “A simple quaffer” thought Mike. Amy thought it was “unmemorable.” Jim thought it was flat with little character. Six would buy it, three would not, two were undecided.

Most of the group were impressed by the value. Michael noted berries on the nose and called it an “everyday Pinot.” Jake picked up cranberry and pronounced tannins and didn’t care for it. I liked the nose, found it not too complex but perfect for the price. Mike got cherry cola and leather on the nose and thought it had good acidity. Seven would buy it, two wouldn’t and Ken said he might.

To be fair, this may have been a bad bottle. Sue and Jack said it was “stinky.” Michael said it smelled musty. No one like the nose and none of us would purchase this wine.

Jake felt it was raisiny and port-like on the nose and that it finished too quickly. Ken found it fruit forward with good tannic structure and dark cherries and thought it was excellent. Sue and Jack thought it was delicious and complex. Two would buy it, two other would if it were at a lower price and the rest of the group said they would pass on it.