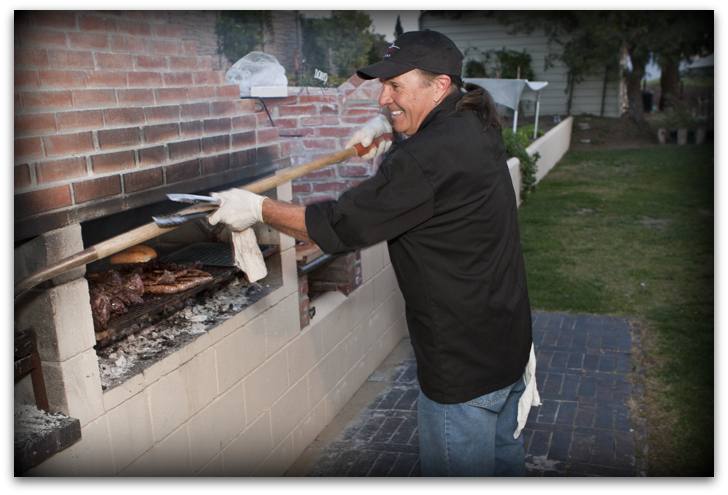 Doffo Winery – Bring On The Zin Prototype label for the yet to be released Doffo Zinfandel

As people entered the Doffo Vineyard grounds for the wine pickup party, they were greeted with a glass of Viognier and the wonderful aromas of roasted meats cooking on the hand crafted stone barbecue.  Appetizers lined the tables with meats, cheeses, olives, and many other wonderful dishes available to eat.  It is obvious that this was not any ordinary pickup party, it had Marcelo Doffo’s signature all over it. Marcelo was stoking the fire with a blend of hickory and coal that intensified the aromas that permeated the air.  Marinated skirt steak, tri-tip, and italian Sausage were simmering above the hot coals.  The people at the party were milling around in great anticipation of the delivery of their food, while sipping their Viognier.

The Viognier was a clean, refreshing wine with pear and peach flavors.  It had a light hint of herbs and anise.  The residual sugar seemed a little lower then most Viognier, so it did not overpower the appetizers that were on the table.  There was enough acid and flavor to go well with cheeses, especially the Gouda that was provided at the event.  As food started to be served, Marcelo’s wife Zulma started to pour the ’09 Zinfandel.

The Zinfandel was produced from 5 year old vines and barreled in 100% American oak with a medium toast.  It expressed rich dark berry, cranberry, and had about a one percent residual sugar.  This Zinfandel was delicious and will be even better after the blending process is finished and the sugar is lowered.  Doffo is already selling this wine as a “wine future”.  This will allow members, who want to pre-purchase the wine for pickup later in the year, to have a chance to buy it before it goes into retail site sale.  After the Zinfandel tasting was finished, people started to go into the wine tasting room to buy other bottles of wines.  One of these wines was an ‘06 Malbec that went perfectly with the meal.

The Malbec was a bright ruby color; it expressed rich dark red fruit aromas and flavors.  It finished with a light earthiness that went well with the meats that were served.  The finish lasted on the pallet almost a minute and was easily refreshed by the next sip.  The skirt steak served with Chimichurri sauce paired well with this wine.  The wine was able to break through the higher fat meat flavors left in the mouth and completely prepared the pallet for the next bite of meat.  This made each bite of the meat explode in the mouth.  After the meal was finished another wine was purchased.  This wine was the popular ’06 estate grown Syrah. This wine had a rich deep ruby color with a large fruit forward bouquet.  This full-bodied wine express cherry and cranberry on the nose and did not hold back on the flavor.  Dark berry flavor dominated the pallet, yet finished off with complex herbal tones.   This is a great wine to finish an evening and is perfect for just sipping or with dark chocolate desserts.   As the evening continued, Doffo had an announcement to make to the crowd.  He invited Edwin Mahieu, an author from Taste of Temecula (TOT), to address the crowd.

Edwin announced that Doffo won “best overall winery” selected by several authors from the TOT organization. This winery was picked out of 27 wineries that participated in the World of Wine tour that occurred on March 6th and 7th.   As the announcement was made, the crowd clapped and cheered for Marcelo and his family.  The positive nods from those that were clapping only demonstrated that this was not a surprise to them.  Many of the people have been member on Doffo’s wine club for many years and this only confirmed what they already knew.  It is not surprising, since Marcelo has a difficult time keeping wines on the shelves.  It is not unusual that wines completely sell out month after month.  Being a boutique winery, his wine is carefully hand-crafted in small quantities and this maintains the quality, but limits the availability.

With the end of the night quickly approaching, great wines in hand, and delicious food completely finished, there only one thing that can make this event even better.  The next pickup party at Doffo Winery!