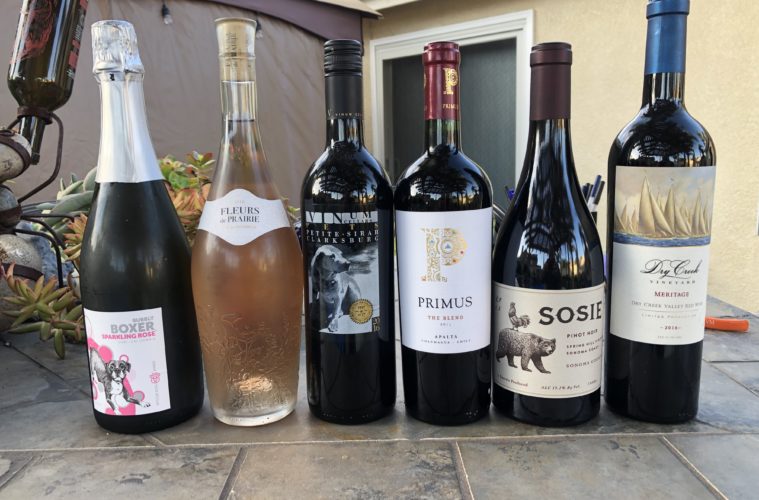 We got together in early April in Ken and Taryn’s cozy Southern California back yard for another wine tasting. The heat lamps provided relief from the slight chill in the air. We loaded our plates with tasty morsels brought by friends and sat down to begin our mission.

I went to the Family Winemakers of California tasting in Del Mar last month. One of the wineries I discovered was Rescue Dog Wines. As the name implies, 50% of their profits support rescue dog  and charity organizations and local SPCAs. We tasted the Bubbly Boxer Sparkling Rosé from Lodi and it was very well received. I loved its pale pink color, soft nose and tiny bubbles. Brandon called it a “great bubbly.” Ken found it very smooth with the perfect amount of sweetness. Produced using the Méthode Champenoise, it sells for $38 and scored better than four out of five stars.

We moved on to a Provençal rosé, the 2018 Fleurs de Prairie, a blend of Grenache, Cinsault, Cabernet Sauvignon and Syrah. David called it refreshing with a delicious finish. Brandon thought it was very floral. Chris called it intense. It scored just under four stars and it sells for $18.

Next was the Vinum Cellars 2016 Petite Sirah from Clarksburg. Deep dark, it sure looked like a Petite Sirah. I found it fruit forward with an expressive nose, but not much finish. David thought it was ready to drink now, but wouldn’t likely age well. Ken called it very drinkable, but with no real complexity.  At $13, it scored about three and a half stars.

We tasted a Chilean Bordeaux blend, Primus’ 2015 The Blend. Comprised of Cabernet Sauvignon, Merlot, Carmenere, Petit Verdot and Cabernet Franc, the fruit is handpicked and only natural yeasts are used. Chris remarked on its tart dark berry flavors and integrated tannins. Ken said it was “in your face BIG” with luscious fruits. I thought it was an excellent value at $18 and it scored just below four stars.

The next wine came from the Sonoma coast, the 2015 Sosie Spring Hill Vineyard Pinot Noir. Ken called it wonderful and detected a touch of dill. Chris picked up the dill, too and said it had a long, satisfying finish. David simply loved it. At $43 it scored nearly four and a half stars.

Our group is very fond of wines from Dry Creek Vineyard and we ended this tasting with their 2016 Meritage. A blend of Merlot, Cabernet Franc, Malbec, Petit Verdot and Cabernet Sauvignon and aged for 20 months in French, Hungarian and American oak. Chris found cherry, black currant and blackberry on the nose and loved its long finish. David said it was lovely and well worth $30. Brandon called it the “best wine you’ve poured.” It scored well better than four and a half stars and received several perfect five-star scores.