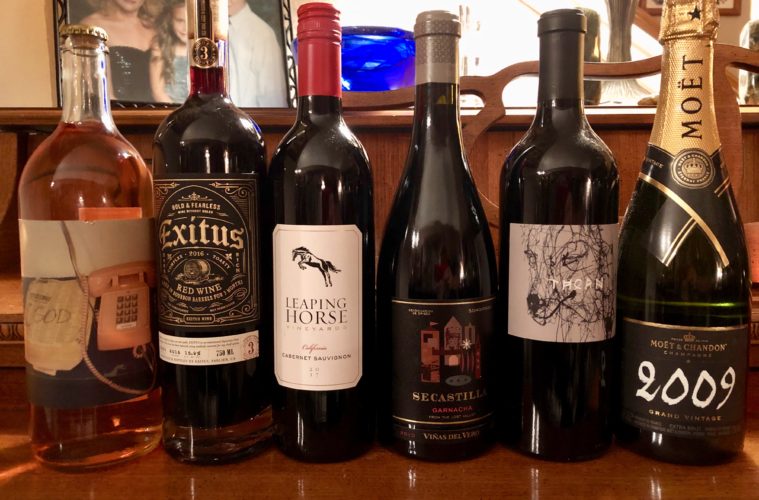 When Jan hosts us for a wine tasting, you can always count on a big crowd in attendance. On a November evening last year, so many people showed up we broke the tasting into two groups, each group tasting six wines. Food was plentiful and delicious and the wines flowed freely.

There appears to be no end to winemaking talent in the Coppola family. Francis Ford Coppola has been a presence in both Napa and Sonoma. Now daughter Gia has her own label, Gia Coppola. All her wines come in one liter bottles with a pop top. We tasted her #overit California rosé, a Grenache/Mourvedre blend. Wanda called it “bright, light and flavorful and a great value” at $18. Ken found it delicate and floral. I loved the pale color and strawberries and cherries on the tongue. It scored three and a half out of a possible five stars.

We tasted the 2016 Exitus bourbon barrel aged red blend. I am not a fan of bourbon barrel aged wines, and this one was no exception. There’s not a lot of bourbon on the nose, but it’s there when you taste it. I found it a bit on the sweet side. The blend of Zinfandel, Petit Verdot, Cabernet Sauvignon and Merlot spends three months in Kentucky bourbon barrels. Doug liked the nose, but found the wine bitter. Other tasters called it unique and interesting. At $26, it scored just over three stars.

Our third wine was the 2017 Leaping Horse Cabernet Sauvignon from Lodi. Ken liked its balance and called it a steal at $10. Scott said it was the “best $10 wine I have tasted in a long time.” I thought it was light, but easy drinking and a great value. It scored better than four stars.

Moving on we tried the 2010 Secastilla Garnacha from Spain. I loved the deep color, earthy nose and long finish. Ken found it very drinkable but overpriced at $39. Two people called it smooth. It averaged nearly four stars.

The Prisoner Wine Company has a 2015 Merlot called Thorn. 81% Merlot, it also has Syrah, Petite Sirah and Malbec, aged in French and Hungarian oak. Wanda called it well-balanced and lovely with a nice spine. Ken enjoyed both the nose and the palate. I loved its deep color and found it elegant. At $39 it scored better than four stars.

We finished with a pop, Moët & Chandon’s Grand Vintage 2009. Each Grand Vintage is unique and the cellar master’s free personal interpretation. 2009 featured 50% Pinot Noir with 36% Chardonnay and 14% Pinot Meunier. Ken said “WOW, that works!” He thought it was the ideal way to celebrate Thanksgiving, Christmas and New Years. Wanda called it perfect. It received several five-star scores and at $80 averaged four and a half stars.