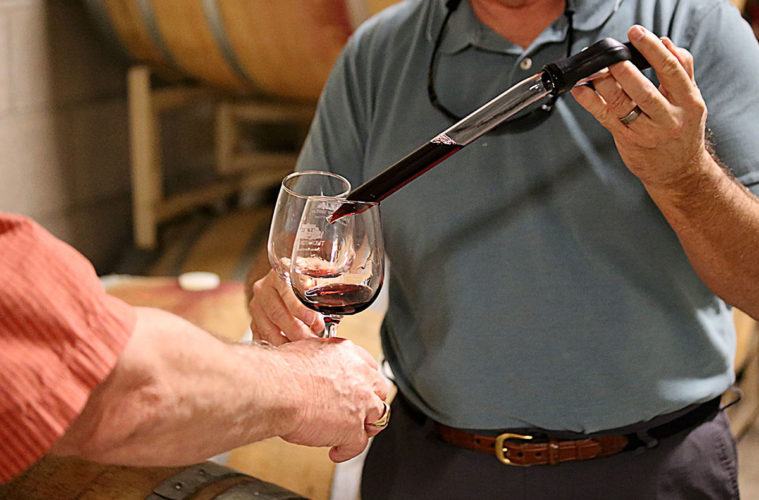 Creating A Legacy at Thornton Winery David Vergari has been the Executive Winemaker at Thornton Winery for more than six years now. I clearly remember visiting with him in his office right after he had been hired. We had an excellent visit. He shared his background with me and gave me his initial impressions of the Temecula Valley. David has made wine on four continents and came here having spent the bulk of his career in Northern California.

“We’ve had a good run,” he told me, when I asked him about the awards Thornton wines have been accumulating. The wines he has been crafting have picked up several gold and silver medals over the past few years. “Bronze doesn’t count,” he said. “It’s like a tie.” Two years ago Thornton’s Barbera picked up the sweepstakes award for the best red at the Riverside International Wine Competition. The Brut Rosé missed winning sweepstakes for best sparkling wine by “one lousy vote.” Vergari is a thoughtful man and weighs his words carefully. He says he honestly doesn’t keep track of awards anymore. Thornton is perhaps best known for its sparkling wines, produced in the traditional French Methode Champenoise. On a recent visit to France, John and Steve Thornton went on a scouting expedition for a new sparkling wine line. It was delivered in May 2016, replacing a piece of equipment that dated back to mid-century. David is very pleased with the consistency and quality of the wines it helps him to produce. He’s working on a cuvée now, basically the best of the best, which is still a few years away from release. I had a taste from the tank and it was stunning.

“We’re onto something, and it’s only getting better. I’m truly proud of what we are doing.” He told me he has seen significant progress in the Temecula Valley since he arrived here, adding, “We have to keep improving.” He says he’s his own worst critic and he has a strict “no b.s.” rule when it comes to wine, meaning he doesn’t want his associates telling him what they think he wants to hear. We talked about what grapes he believes are best suited for this region and he replied there are several Italian varieties that thrive here. He loves Sangiovese, but says it’s a challenge because many people aren’t familiar with it. Once you tell them it’s the principal grape in Chianti, they get it. He loves the fact that it’s a “triple threat”, meaning you can produce a red, rosé or sparkling wine from it. He’s also fond of Barbera, Nebbiolo and on the white side, Vermentino, which he’s truly excited by. I tasted the not yet released 2016 and it was exquisite. Varieties from the Rhône region of France also excel here with Syrah and Roussanne among his favorites.

When he started at Thornton, one of my colleagues asked him what he hoped his legacy would be. At the time he didn’t have an answer. After consulting with his mentor, who just retired as director of winemaking at Joseph Phelps Vineyards, he says his hope is to “make it better than when we came on board and to prepare it for the transition to the next winemaker. I hope to contribute something and let the chips fall where they may.”