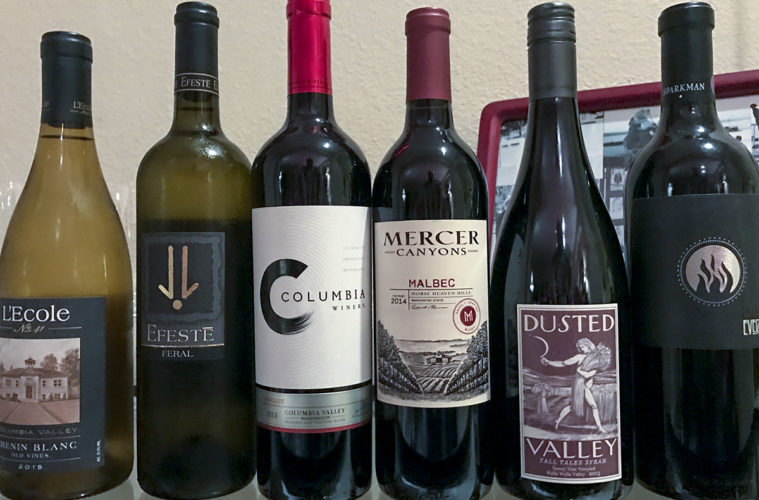 First in glass was the 2015 L’Ecole No. 41 Chenin Blanc from Columbia Valley. I’m a big fan of this grape and I enjoyed the tropical fruit nose, bright fruit on the palate and long finish. Jean called it a “great surprise!” Don said it was “an unexpected pleasure.” Everyone found it a great value at $14 and it scored nearly four out of a possible five stars.

The 2015 Efeste Feral Sauvignon Blanc was next and Kim liked the subtle lemon. Most tasters called it light. I liked the acid balance. Don thought it was lovely. It was fermented in neutral oak with no malolactic fermentation. At $20 it scored about three and a half stars. Our first of four reds was Columbia Winery’s 2013 Merlot. Ken called the nose “luscious” and liked its balance. A couple of tasters found it a bit acidic. Laura found it delicious and food friendly. Brian enjoyed the bramble nose and said it was beautifully balanced with a “subtle pepperiness and a feathery softness.” It has small amounts of Syrah and Malbec blended in. At just $14, it scored four stars.

Judi called the 2014 Mercer Canyons Malbec “a great wine at a good price” and loved the mouthfeel. Her husband Jim liked the use of oak and said it was better than the $14 price tag. Kim called it smooth and spicy. I loved the nose and flavors of tart fruits. It scored better than four stars.

The 2013 Dusted Valley Tall Tales Syrah from Walla Walla got mixed reactions. Most felt it needed time to open up. Brian called it a cultured wine, “a wine to get to know.” Jim said it was acceptable. Kim thought the $60 price was a tall tale. It garnered less than three stars.

We ended with the 2013 Sparkman Evermore Old Vine Cabernet Sauvignon from the Columbia Valley. Ken picked up violet with dark berries on the nose. Jan called it a classic cab with great balance, smooth tannins and a long finish. Kat loved the nose and the wine. Jean said it was balanced and fruit forward and loved the nose. Brian said it “lingers like good sex, and for the same reason you want more.” It scored better than four stars and it sells for $100.