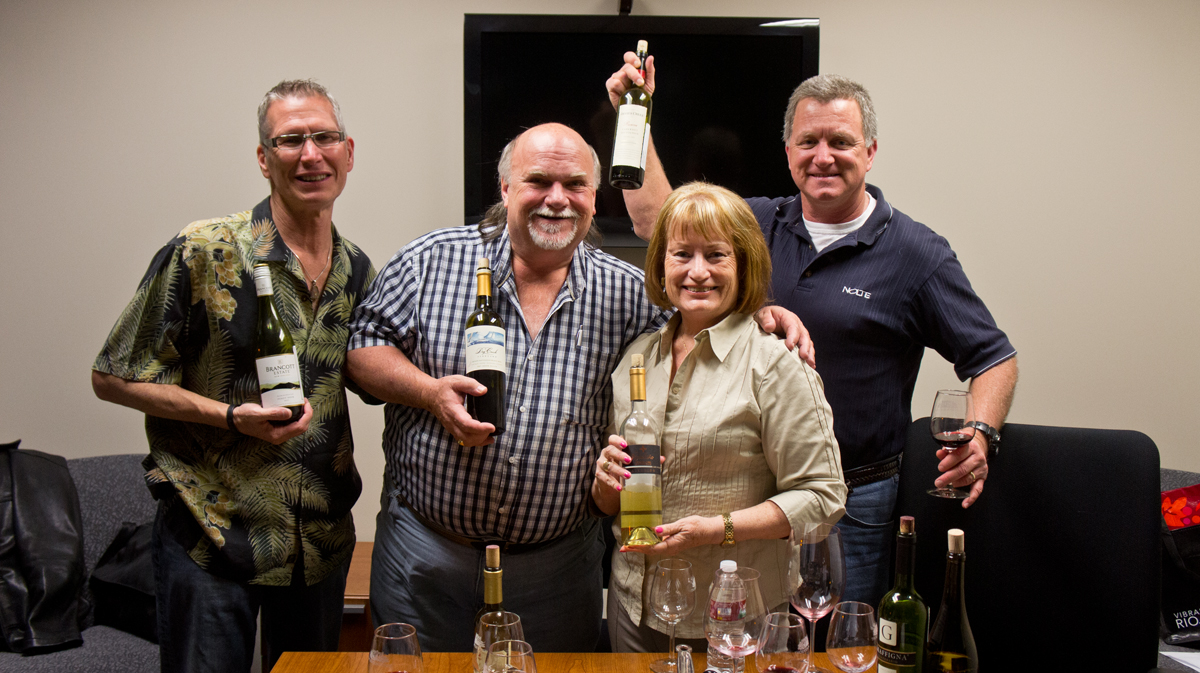 We’re getting pretty good at this. This loosely knit group convenes each month to taste some wine, see how it pairs with the food we’ve brought in and enjoy each others’ company. In early March we met and sampled five wines plus a blind tasting that I decided to try out on the group. I took a bottle of Wilson Creek Winery‘s 2011 Viognier and wrapped it in a paper bag. Several guessed that it was a Sauvignon Blanc. It certainly had the grapefruit characteristics. I love the nose on this wine and the crispness on the palate. It just doesn’t strike me as a Viognier. In any case it’s refreshing and would go well on a warm day. It retails for $18.99.

The official tasting began with Dry Creek Vineyard’s 2009 DCV3 Sauvignon Blanc. One of the things I enjoy most in a Sauv Blanc is the nose, and unfortunately I found this wine to have a very subtle nose. On the palate I picked up pineapple notes. It was well balanced and it paired nicely with Scott’s stuffed Anaheim chiles. At $25, I think it’s on the pricey side.

From Sonoma County we meandered to Spain via the 2010 Robaliño Albariño from Rias Baixas. Albariño is a delightful Spanish varietal and this one didn’t disappoint. A very soft wine, it had hints of apple and citrus and it paired very nicely with the tortilla Española I prepared. The group all agreed this would be another good poolside wine and at about $15 it’s priced right. What is the world’s most curious bottle? For one thing, it’s an app from Brancott Estate. When you scan the QR code on the bottle, the app will tell you which foods pair with that wine, let you play puzzles, tell you about the vineyards and more. We had a bottle of the 2009 Pinot Noir, and having just returned from a Riedel glass demonstration in Las Vegas, I thought I’d show the council the difference a glass can make. In the Riedel glass this wine’s nose was sensational. In a standard glass, it was nice, but unspectacular. I picked up tart cherry and loved the smooth finish. It’s an amazing value at $13. In Ken’s words, “this could be like a go-to wine.” We tasted the 2009 Graffigna Reserve Malbec from San Juan, Argentina. It was a beautiful ruby colored wine with a nice vanilla nose, expressive fruit and great balance. It was an extremely food friendly wine, pairing well with Scott’s stuffed chiles and mini BLTs. At $16, this is another wine I would stock upon. It was the group’s favorite wine of the tasting.

We wound up our visit with the 2009 Jacob’s Creek Reserve Cabernet Sauvignon from the Coonawarra region of South Australia. We also tried it in both the Riedel Cabernet glass and in a standard wine glass. This wine really shined in the Riedel glass. There was a lot of vanilla in the nose. It paired quite well with marinated mushrooms and salami. This, too, is a great value at $16. Until next time, cheers!