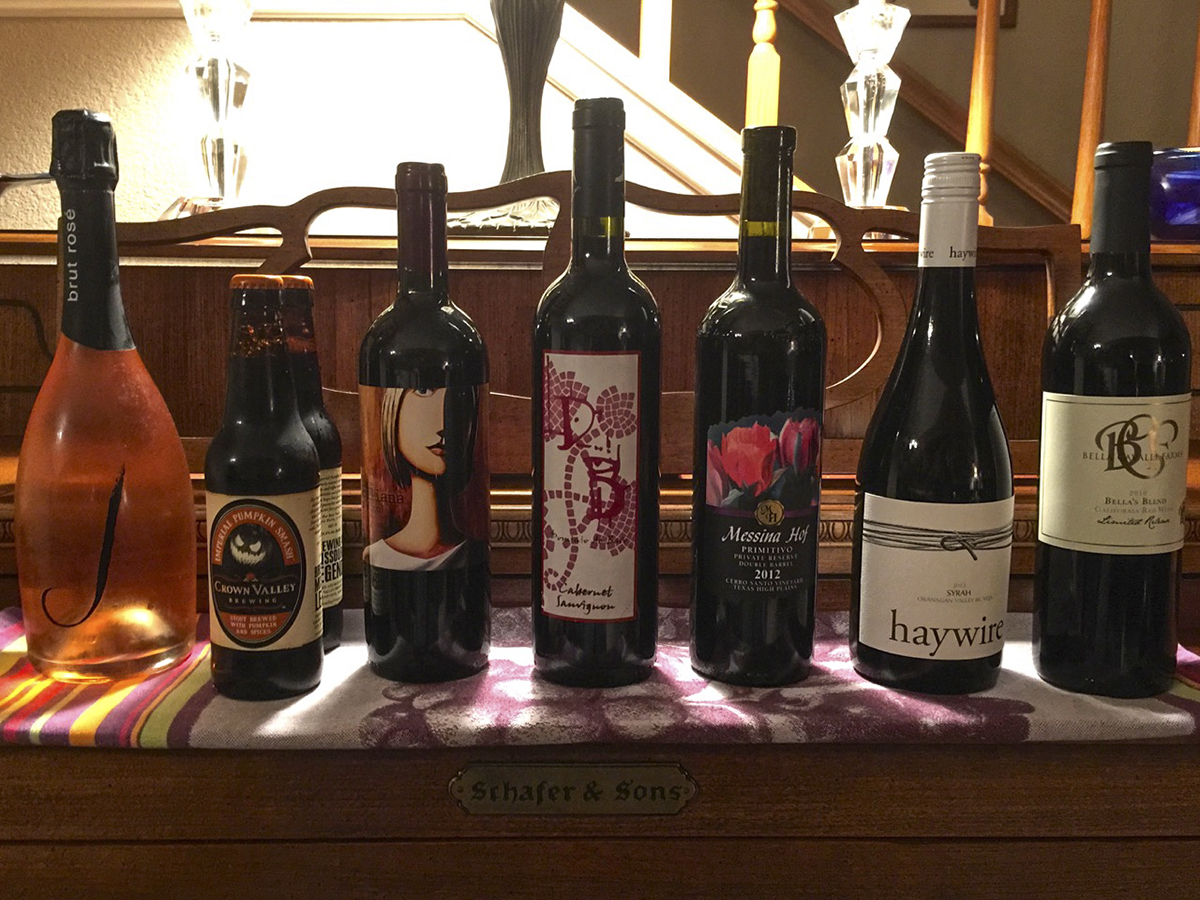 What’s A Beer Doing In There?

Every once in a while you just need to mix things up. At a recent tasting, I threw in a beer. It probably won’t be the last time. We began the tasting with a bubbly from “J”, the non vintage Brut Rosé. This has just about everything I like in a sparkler, a soft, strawberry nose, beautiful pale salmon color, soft fizz. I really loved it. Carol called it a great holiday Brut. Jean loved the delicate bubbles and the color. Brian said it was “really jolly nice.” It averaged better than four out of five stars and it sells for $38.

The Microbrewed Beer of the Month Club sent an assortment of beers and I opted for Crown Valley Brewing’s Imperial Pumpkin Smash. This Missouri beer drew raves from the tasters. Ken called the nose incredible and found it nice and spicy. Jean got hints of coffee and chocolate, but said the ginger and pumpkin came through, too. I thought it was like drinking pumpkin pie. Brian said it was amazing. It also rated more than four stars.

We tried the 2013 Siciliana Nero D’Avola. Jan found lots of fruit on the nose, mostly cherry. Ken thought it was delightful with a polished finish. Carol loved the nose and thought it was a great value at $13. It averaged three and a half stars from the panel. You can order this and many other wines by clicking the link to wine.com.

I’ve convinced Californians one by one that’s there’s good wine coming out of Texas. On this evening I poured them the 2012 Messina Hof Primitivo and got winemaker Paul Bonnarigo on the phone to tell them about his double barrel program; French and American oak. Chef Marty called it a solid Primitivo representation. Jan said it was a nice, sophisticated wine. Wes called it “soooo drinkable with nice, subtle oak, great fruit and a great nose.” It received a few perfect five-star ratings and it sells for $22.

I had such a great time last year in the Okanagan Valley in British Columbia. We tasted the 2011 Haywire Syrah from the region. Ken commented on the very expressive nose of earth, sulfur and smoke. I found it to be old world in style with a nice expression of dark fruit. Wes said “in your face nose – wow!” It averaged about three and a half stars and if you can find it, it should set you back about $45.

We finished with a wine I picked up on a recent visit to Solvang, the 2010 Bella Cavalli Bella’s Blend. The winery is open to members only and those who visit with Stagecoach Tours. Owner Jeff Lockwood has crafted a beauty with a balanced nose and bright berry fruit. Carol gave it five stars and called it fruity, smooth and lovely. Jean said it was nicely balanced. Wes loved its finish. It scored close to four stars and it sells for $32.