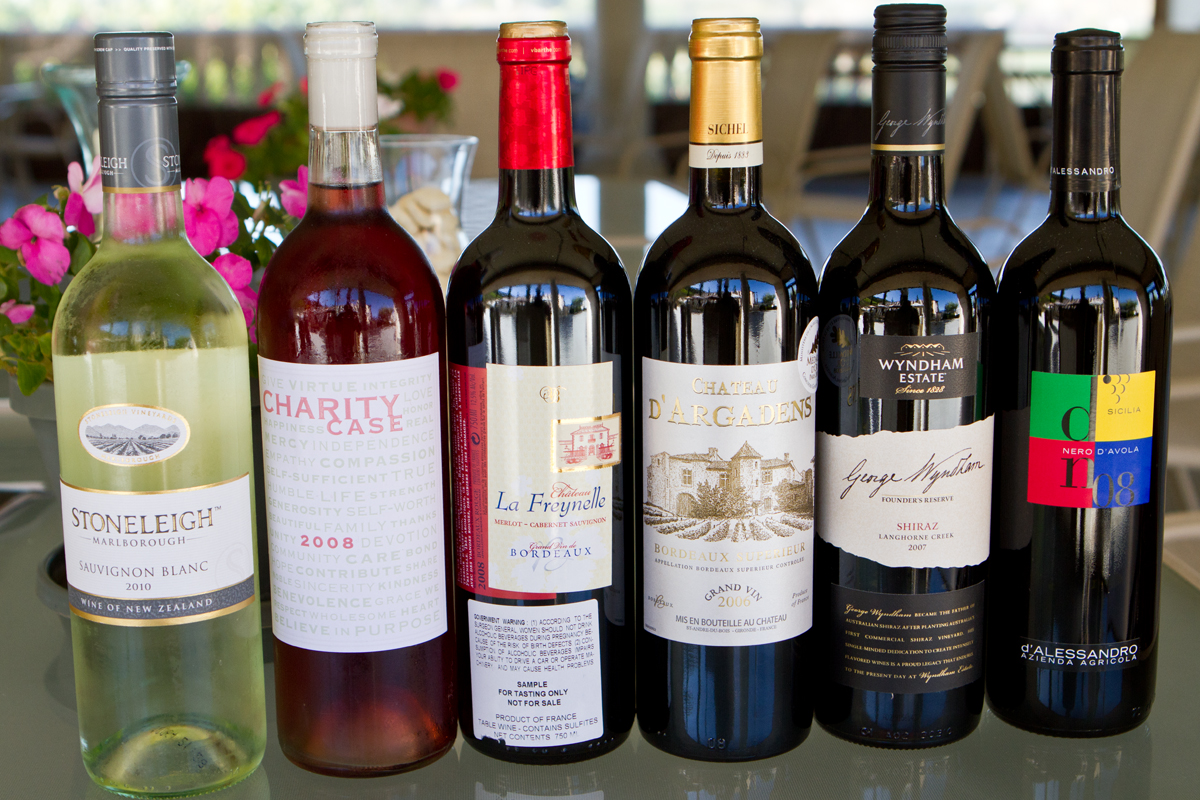 If you write about wine, chances are pretty good that after a while you’ll start receiving review samples. In our case, at times, you wind up with several wines to review, so many that it’s time to rally the troops. I put the word out on Facebook and we wound up at Oak Mountain Winery at 5:00 on a lovely afternoon with palates primed for tasting. Owners Steve and Valerie Andrews joined Laura and me along with local wine aficionado Jan Wilson.

We began our tasting with a 2010 Stoneleigh Sauvignon Blanc from Marlborough, New Zealand. Valerie noted the citrus nose with a mineral quality and enjoyed the finish. Jan picked up passionfruit as well as citrus and found it refreshing, a good summer wine. Laura noted its bright bouquet of grapefruit and thought it was slightly tart, a refreshing little wine. I thought it had classic New Zealand characteristics, but nothing too exciting. Suggested retail is $17.

With summer officially just around the corner, a rosé was just what the doctor ordered. We tasted the Charity Case 2008 Rosé, a blend of Saignee from various Napa Valley Vineyards. Saignee is a French term meaning “to bleed” and it’s the juice removed from the fermenters to enable the remaining juice more concentration. As the name implies, Charity Case makes wine from donated juice and all net proceeds go to charity. Four Napa area charities helping young people are the recipients of this year’s proceeds. The wine had a big fruit forward nose, and Valerie picked up some floral notes. Laura thought it was pleasant, but not memorable. Jan liked the strawberry and raspberry notes and its beautiful deep pink color and found it easy to drink.  Suggested retail is $14.95.

From the Napa Valley we crossed the big pond and landed in Sicily to check out the 2008 d’Allesandro Nero d’Avola. We all raved about the nose, with Laura commenting the nose alone would sell it. Jan liked the nose, too, and found the wine opened up beautifully over time and thought it would compliment  pasta or a nice steak well. Valerie loved its cherry flavors and Steve said he’d like a case of it! You should be able to find it for $15 – $18.

Heading north, we visited Bordeaux, first tasting the 2008 Château La Freynelle Merlot/Cabernet blend. It had a distinctive Bordeaux funk on the nose that some of the tasters enjoyed while others couldn’t get past it. Jan and I liked the nose, but felt it led you to expect something better than what was in the glass. No one was particularly fond of it, but felt it was okay for $12 a bottle. We moved onto the 2006 Château d’Argadens Bordeaux Supérieur Rouge, Merlot/Cab/Cab Franc blend. Jan loved the nose and found the wine fruit forward with light oak and berry and plum on the palate. She liked the finish. Valerie picked up green banana on the nose and vanilla and caramel on the palate. It was one of the day’s favorites and a bargain at $14.

We ended the tasting near where we began, in Australia, with the 2007 Wyndham Estate Langhorne Creek Shiraz. Laura pointed out the pepper and fruit with a touch of cherries. Steve didn’t care for it at all. Jan, Valerie and I all liked it. Jan noted it it took patience for it to open up, but once it did it had a smooth finish with red currants and cherries. Valerie loved the deep color and pepper notes and the dark rich cherries on the palate. Expect to pay about $15 for this wine.