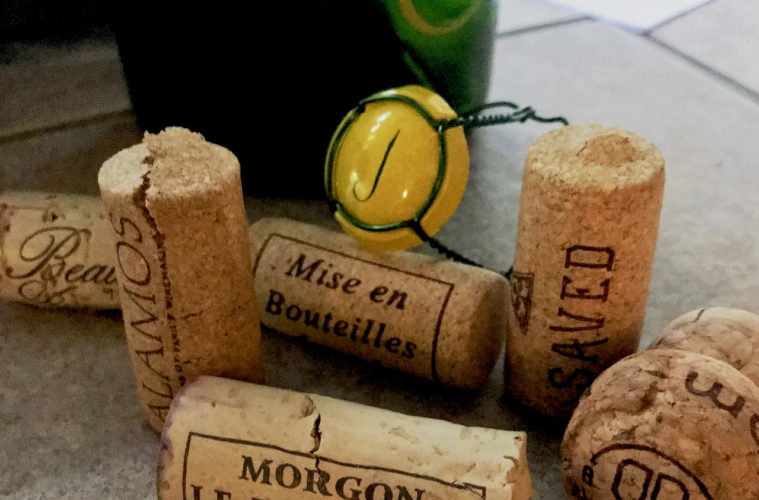 In addition to owning Roadrunner Ridge Winery and making their wines, our friends Jim and Judi are pretty terrific at hosting a wine tasting. You can generally count on Judi to put out a platter of deviled eggs using eggs collected from her chickens. This particular evening was no exception. Others in the group brought smoked salmon, assorted cheeses and other tasty treats. I brought six bottles and we proceeded to taste them.

J Vineyards 2016 Cuvée 20 was the first we tasted and Laura said it was “very nice, dry but not too dry.” Brian called it delightfully effervescent with a clean finish and liked the toasted brioche nose. Ken found it very refreshing. Jim simply said it was excellent. Our panel gave it a solid four and a half out of five stars and it sell for $38.

Our next two wines came from France, starting with the 2015 Georges DuBoeuf Pouilly Fuissé. I loved the soft citrus nose and found it bright and crisp on the palate. It paired very well with cheese. Ken called it “enticing and refreshing, soft on the palate with nice floral and mild citrus notes. Brian thought it was very enjoyable. Mike thought it was crisp and clean. At $30 it scored just under four stars.

Our first red was also from Georges DuBoeuf, the 2015 Morgon. Made from the Gamay grape, Laura said it was “a little bitey,” but she liked it. Brian pronounced it “young, fruity, delectable and demure.” I loved the pretty violet color and it tasted like classic Gamay. Several tasters said it just wasn’t to their palate. At $20 it scored just about three stars. Our next taste was the 2016 Alamos Malbec from Mendoza, Argentina. Jim said “not bad at the price. ($13) I could sip this for a while.” Laura liked its mouthfeel. Commented Brian “Blimey, this ain’t half bad!” Ken enjoyed the spicy nose with cherry and was also impressed with the value. Kim found it smoky and dusty with cherry. Judi said it was well-balanced. It averaged a little better than four stars.

We moved on to the Saved Red Blend from California. Ken said it was his favorite so far and enjoyed the nice balance of berries. I loved its deep color and plum nose. Kim found it rich and smooth. Mike said “this is my kind of nose!” He also liked the smooth, lingering finish and called it yummy. It scored close to four and a half stars and sells for $25.

We ended with Beaulieu Vineyards 2014 Napa Valley Cabernet Sauvignon. It was Kim’s favorite of the night and she gave it four stars. I loved it and was impressed it survived high temperatures during shipping. Ken loved it and thought it will only improve with age. Mike said it had a great cherry nose, amazing mouthfeel and a smooth long-lasting finish. It was the favorite of many of our tasters, garnering nearly four and a half stars. $25