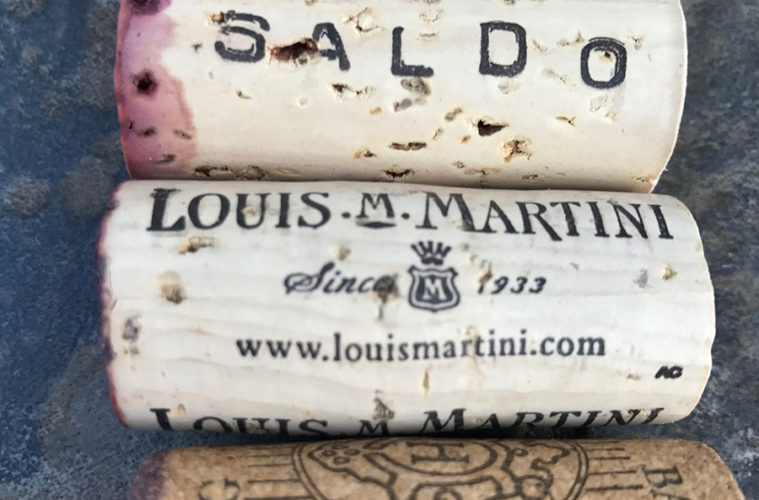 Wine Tasting – It’s What We Do We met this time at Ken and Taryn’s home near Temecula’s wine country. On a warm August evening, the kitchen table laden with food, we set out wine tasting with seven wines while we noshed.

I believe bubbles are always a good place to begin or end a tasting, so we kicked things off with Cuvée Deor Prosecco from Italy. Presented in a gorgeous gold-colored bottle, Lisa gave it a perfect five-star score, calling it refreshing. Jean said it was slightly sweet, but not too sweet. Laura called it a good value for $10 and thought the bottle was pretty. Chris said it had lots of peaches and a long buttery finish. It averaged four out of a possible five stars.

We continued with Voga’s 2016 Pinot Grigio from Italy. In a bottle that closely resembles a Voss water bottle, I called it easy drinking. Tony loved the sweetness on the palate. Chris found citrus notes of lemon and nectarine on the nose and hints of pear, apple and lime on the palate. Jan called it very soft and fruit forward and a good value at $9.

We tasted our first wine in a can, the Tangent California Rosé. The only comments that even came close to positive came from Jean, who liked the concept and Brian who called it “an acceptable summer afternoon drink.” At $32 for a four pack, everyone thought it was way overpriced. The evening’s first red came from Herzog, the 2015 Baron Herzog Pinot Noir. Herzog Winery has been making Kosher wines in California’s Ventura County since 1985. Ken called it balanced and subtle. Laura said it was good for the $13 price, but “not as full-bodied as I like.” Chris found strawberry, raspberry and ripe tomato on the nose and vanilla, rose petals and coconut on the palate. It averaged about three and a half stars.

We went south of the border to Argentina for our fifth wine, the 2014 Gascon Reserve Malbec. Kim liked the smokey nose and called it dusty and spicy.I loved its big nose and found it well-structured. Tony said it was the best of the night so far. Lisa said it was full-bodied with a spicy finish and a hint of chocolate, while Ken called it very luscious. at $25 it scored better than four stars.

Next was the 2015 Saldo California Zinfandel. Brian called it “sweet with redeeming acidity.” Ken was impressed by its complexity for such a young wine. Randy found it to be very nice with a peppery finish. Chris enjoyed the “wonderful tannic palate packed with spicy blackberry fruit and lively acidity.” Tony simply said it was a nice drinking wine. It sells for $28 and scored better than four stars.

Finally we tasted Louis Martini 2014 Napa Valley Cabernet Sauvignon. “Winner, winner chicken dinner” said Ken who added it’s only going to get better. Jean loved it and said it was her kind of Cab. Said Jan, “Louis Martini does not disappoint.” Tony calls himself a Cab snob and said it was his favorite of the night. Kim said “I could drink this all day.” At $30, our tasters gave it close to four and a half stars.