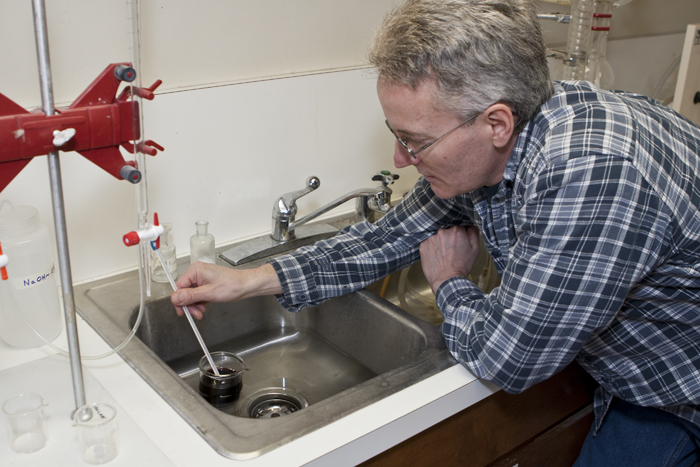 “Oh, you’re Craig Larson, the winemaker. You’re the key.” Craig was having dinner at Meritage at Callaway with his wife one evening when someone came up and said that to him. Craig has been Callaway’s winemaker for the past two years now. He says there’s a lot of pressure when you come into a winery as a new winemaker because you really have to prove yourself. “That’s a lot of responsibility.”

Craig is Canadian born and began his love affair with wine at the age of 15 or 16. His brother began introducing him to French Bordeaux and Italian Chianti and it was love at first sip. Many people have to acquire a taste for dry red wines, but not Craig. When he makes wine, his philosophy is to wed New World and Old World wine making techniques. “I’ve drank a lot of European wines, so I try to hold the varietal character… try to express it. I try to get the wine and the fruit to speak for itself.”

At Callaway he uses a lot of French Oak, believing it imparts the character he’s looking for in his wines. He says a good palate is essential to wine making in order to pick up flaws. It tells you a lot when tasting wines. “You’ve got all of these different wines that you’ve tasted over the years and they do stick with you and they do influence your wine making.” He reminds himself that he’s not making wines for himself, but rather the consumer. He wants his wines to be balanced and to taste good when they reach the consumer. Dry wines can be smooth, and his desire is to make wines that pair well with food. Craig warms up a barrel sample of Syrah in water, waiting for it to reach just the right temperature.

His most medaled wine is his Sangiovese Rosé, which he styles after the rosés of Provence. “It takes a lot of tender loving care.” Making his rosé entails a long day, starting by getting the fruit early in the morning, monitoring it for just the right color, about six hours in press. By the time the juice is ready it’s about 8:00 at night. I tasted some in Callaway’s gorgeous tasting room and it’s beautifully balanced. The color is lovely. In his office we tasted barrel samples of Merlot and Syrah. The Syrah came out of a tank at about 45°, so he meticulously brought it to the proper temperature in a sink of warm water, stirring it with a thermometer. Both wines exhibited the qualities he described, with the fruit taking center stage and excellent balance. Craig’s parents were farmers, and he’s an earth sign, which he says plays an influence on his relationship to the earth and vineyards. He wears many hats as a wine maker – he’s Cellar Master, he looks after the vineyards which he considers to be the most important element of all. “If you don’t have the quality there, you’re not going to get it in the wine. You have to be a part of it. You have to walk through the vineyard, you have to see those subtleties and see what needs to be changed all the time.” He believes that the science of wine making is a crucial component, but that art and creativity are also mandatory. Next time you’re in Temecula Wine Country, pay a visit to Callaway Winery and taste the fruit of Craig’s efforts.