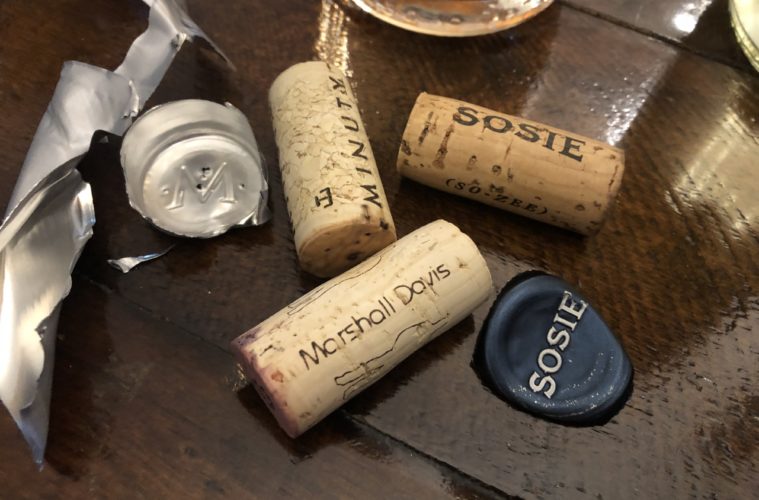 Tasting Wine With Friends Is Fine About twice monthly we gather at a different friend’s home. Our reason? Tasting wine, and food and good companionship, of course. As always, Scott and Wanda pulled out all the stops when we got together in late May. Wanda had the kitchen counter laden with delicious food, and our guests brought their contributions, too.

Spring heading into summer is clearly rosé weather. We began with a Provençal rosé, 2018 Minuty M, a Grenache, Cinsault and Syrah blend. Al called it lovely, with a great nose and soft, smooth finish. Brian said it was “luscious, perfumed, soft, sweet and savory.” I loved its pale color, round mouthfeel, and long finish. Ken called it delightful, with an aromatic nose, and said it “would be a great summer wine.” It averaged a score of four out of a possible five stars and it sells for $20.

We always look forward to offerings from Dry Creek Vineyard, and it’s not often we get to taste a Fumé Blanc. Their 2018 release is excellent. David said the enjoyed the lime on the nose and its color but felt it had a “twang” on the palate. Ken got grapefruit on the nose, “big time”, and he enjoyed its mouthfeel. Kim called it “bright and fresh.” It averaged three and a half stars and you’ll find it for about $16. We tasted the 2015 Sosie Rousanne from Sonoma County. Barrel fermented and 100% malolactic fermentation, it didn’t get a lot of love from our tasters. Ken found it a little tangy. Scott found no flaws, but said the $38 price tag was a “stumbling block.” Kim called it a bit one-dimensional. Al, however, found it very nice. It scored just about three stars.

We then tasted a Washington State Cabernet Sauvignon, Kin & Cascadia’s 2017. Fermented with 100% native yeast, this wine was left on the skins for 35 days and spent three months in new and neutral oak. Al felt it was an excellent value at $16. Ken enjoyed the dark berries and called it a little dusty. Scott enjoyed the depth. It scored just under four stars.

We headed south from Washington to Oregon for the 2017 Marshall Davis Pinot Noir. Davis enjoyed its balance but felt $45 was a bit pricey. I liked the strawberry nose and long finish. Al liked the fruit. Brian noted black pepper and strawberries and called it “delectable.” It too garnered just under four stars.

Finally, we went down under with the 2017 Henry’s Drive Magnus Shiraz. “Yum, yum, yum,” said Kim. Brian said “dark, ripe fruit and a vanilla coating. A wine with depth and complexity. Great stuff.” Ken loved it but thought it needed some aging. David loved the deep color and thought the nose was amazing. At $79, it scored four and a half stars.

Tom Plant launched WINEormous in 2009 and is a member of the International Food Wine and Travel Writers Association. Based in Temecula, California, he offers intimate winery tours for no more than seven people. Tour details and pricing are available at www.temecula-tours.com. WINEormous is the recipient of the Luxury Travel Guide’s Wine Tour Operator of the Year award for Temecula 2017 and 2018 and the Lux Life Mag Best Customised Wine Tour Operator Temecula for 2019 as well as Most Unique Wine Tour Operator – Southern California. Call now to book your Temecula Winery Tour at (951) 907-9701. Ask about special discounts.