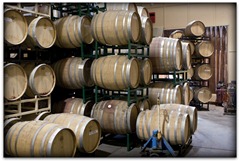 You may be wondering why there’s a picture of me with Kristi Yamaguchi on a wine blog. Here’s the story. Laura and I were in San Jose for a trade show. Kristi was there to promote her Always Dream foundation in the booth next door. It’s not every day you get to meet an Olympic Gold Medalist, so, there you have it. Last Monday we drove from San Jose to Paso Robles. We love the area and we’re crazy about the wine there. We stayed in the winemaker’s suite at Zenaida Cellars. This was our 5th or 6th visit to Paso in less than a year, and the first time we had visited when it wasn’t a weekend or during a wine festival. Such a difference. We were able to spend quality time at each winery and had a good chance to visit with the people who work there. Tuesday’s first stop was at Martin & Weyrich. Friends of ours had raved to us about it and we wanted to check it out. Among the whites we enjoyed the Pinot Grigio and Sauvignon Blanc. On the red side, their Pinot Noir, Nebbiolo, Sangiovese and Zinfandel were all exquisite. (editor’s note – The winery is now out of business) The woman who was pouring suggested we visit a new winery on Union Road called Pear Valley Vineyards. We owe her a debt of gratitude. The winery itself is lovely, with great view and a bright and open tasting room. The wines were excellent, a blend called Distraction wound up being our favorite. We became one of the first 100 members of their wine club and now look forward to a return visit in June for a private party for that elite group. We struck pay dirt when I called RN Estate Wines to set up an appointment. Owner/winemaker Roger Nicolas told me he normally doesn’t do tastings for just two, but he happened to have an appointment with a writer and would have wine open we could taste. We met him at two. His tasting room is in his home, a mile and a half down a driveway on North River Road. The views are breathtaking. We went inside with Roger and his beautiful dog, Diego. Roger is originally from France, but came to the states in his 20s and got into the restaurant business, working at places like La Grenouille in New York City, The Lodge at Pebble Beach and L’Etoile in San Francisco. He founded the Home Hill country inn and restaurant in New Hampshire and then decided to pursue his dream of making wine and settled in Paso Robles. His Pinot Noirs are among the finest I have ever tasted. He has a Mourvedre that is exceptional and three blends that are equally tasty. Our luck got even better when he asked us if we’d like to join him the following day at PRWS for a barrel tasting.

The facilty itself is awe-inspiring. About fifty wineries in the area use this place to crush their grapes and produce their wine. Roger had three other guests, an importer from Los Angeles and two visitors from France. What amazed us was how entirely different the same wine can taste from different barrels. We tasted several Pinot Noirs, some Cabernet Sauvignon and Zinfandel, which he describes as light and delicate, something you don’t normally associate with Zin.

Other highlights of the trip were stops at Carmody McKnight and Fratelli Perata. Those stories we’ll share with you another day. Salut!