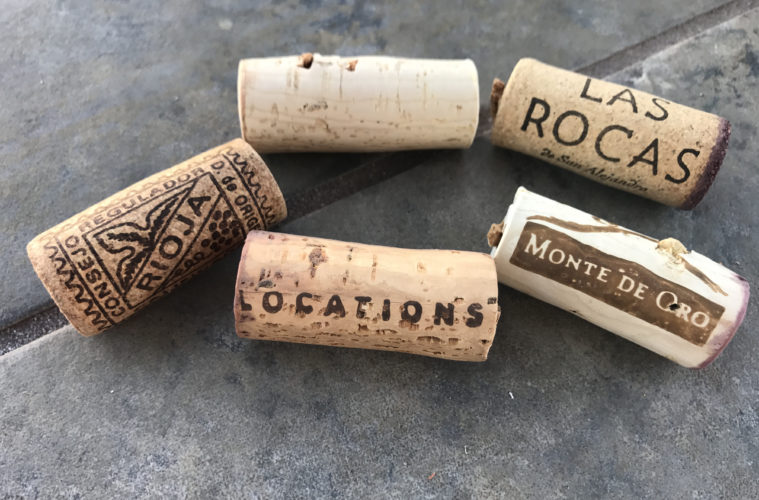 We assembled on a late June evening at Ken and Taryn’s. Friends brought platters of shrimp, salmon, cheeses and other delicious treats to enjoy with the wines I provided. On this occasion, we had seven to sample on an evening of wine tasting.

We began with a white from Rioja – the 2016 Hacienda Lopez de Haro Blanco. Made from the Viura grape, this wine spent three to four months in French oak. Kim called it a “great summer wine” with heavy peach on the nose, fruity and refreshing. Alex said it “tastes like a wine you wouldn’t get tired of.” It was soft and creamy, said Wes. Our host Ken found it a “great summer wine.” Everyone felt at $14 it was an excellent vale. It scored nearly four out of five possible stars.

Our second wine was Edna Valley Vineyard’s 2016 Pinot Grigio. Chris noted a citrus nose with apple and pear on the palate and lively acidity. I thought the nose was faint, but it was crisp on the palate and it paired surprisingly well with a beef slider. Subtle and nice, remarked Esther. Alex said it was as good as many whites at twice the $14 price. It scored a three star average.

Our last white came from the Santa Lucia Highlands, the 2014 Pessagna Intrinity (not a typo) Reserve Chardonnay. Alex remarked “$48 does buy you a lot of flavor!” He enjoyed the lingering finish. Esther loved it giving it a perfect five stars. I enjoyed its golden straw color and Meyer lemon nose. Chris called it buttery with notes of pear, guava, apple and lemon peel. It scored better than four stars. We progressed to the reds, with the 2014 Las Rocas Garnacha from Spain’s hilly northeast, Calatayud. Aged 10 months in American and French oak. Lisa enjoyed its pepper and cherry and called it bold. She loved it. Esther thought it was the perfect wine to go with a steak. Brian said it was dark, smokey and serious and “punches above its weight.” Ken liked the pepper and tobacco notes and its smooth finish. Was gave it five stars. At $14 it scored well more than four stars.

We tasted another Spanish wine, from Dave Phinney’s Locations series, the E4 blend of Grenache, Tempranillo, Monastrell and Carignan. Chris got black cherry on the nose and dark berries and vanilla spice on the palate. Ken said it was very smooth and well-balanced. Brian added “It’s stern and needs time to soften up, perhaps, but there is depth and complexity here which rewards your persistence.” It scored better than four stars and sells for $20.

We concluded the tasting with the 2013 Synergy 65 from Temecula’s Monte de Oro winery. A blend of Zinfandel, Merlot, Syrah and Cabernet Sauvignon, Esther called it excellent and amazing and smelled roses and cherries. Kim on the other hand thought it was one-dimensional. Ken said the nose was wonderful and found the wine nuanced and balanced. At $36 it scored just under four stars.