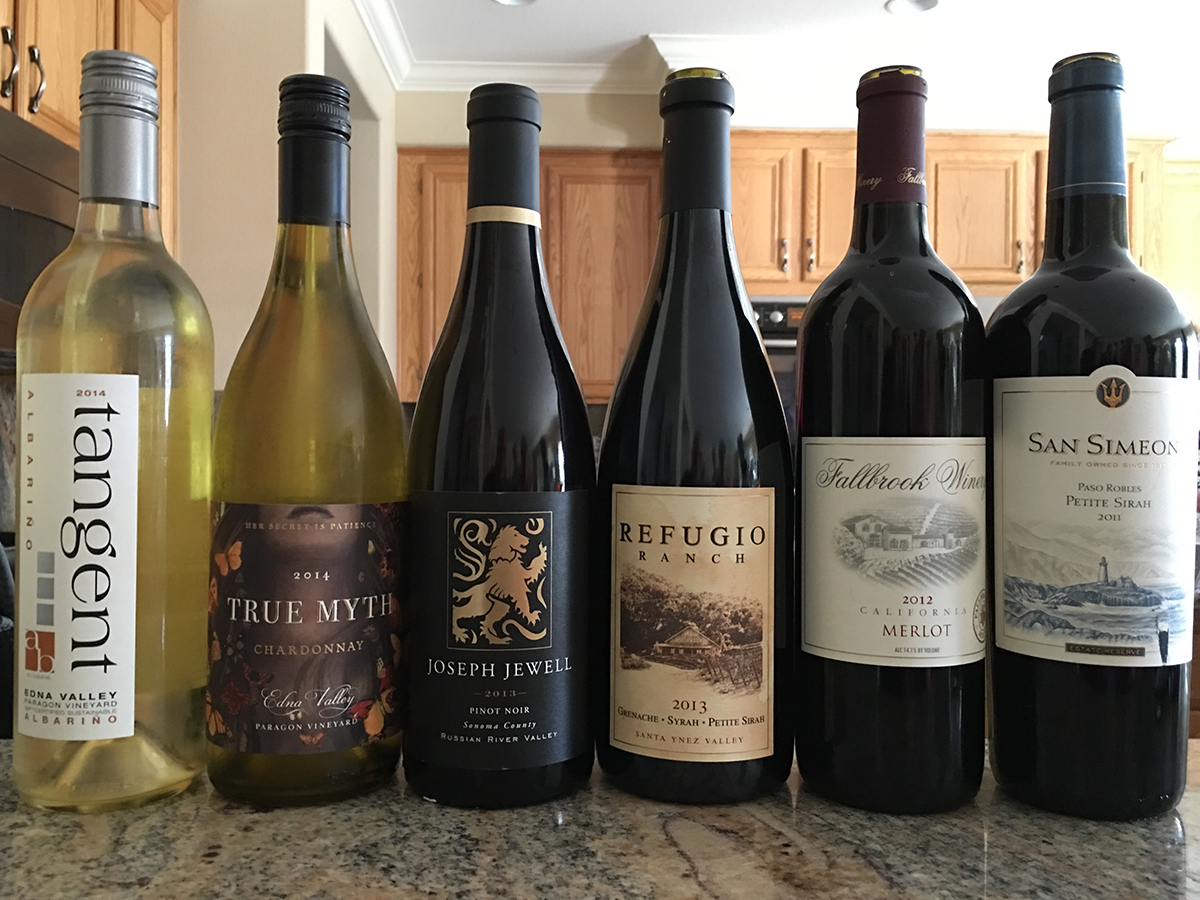 Wine in the Glass

You can always count on good food at Kim and Brian’s. On a warm summer Southern California evening, we filled our plates and headed outside, wines bottles at the ready. We had six wines in front of us, the first, Tangent’s 2014 Albariño from Edna Valley. Al loved it. “Crisp, dry finish, lovely fruit, tremendous value” he said. Ken remarked on the subtle stone fruit nose and found it food friendly. Susan noted green apple on the palate. Jim simply said “very nice!” At $14, it scored just over four out of a perfect five stars.

We moved on to the 2014 True Myth Chardonnay. Both Tangent and True Myth are from the Niven Family Estates, produced in Edna Valley near San Luis Obispo. True Myth is the newest label in the family and Ken loved the herbaceous nose and called it crisp with hints of pineapple and lime. Laura called it fruity, but dry and found it an excellent value at $14. Susan liked the nice long finish. Jim also picked up pineapple and liked that it wasn’t over-oaked. It scored right around four stars.

From Sonoma we tasted Joseph Jewell’s 2012 Pinot Noir. “Oh yeah” Brian said and called it “totally quaffable.” I loved the color and nose of cherries and found it perfectly balanced. Jim said it was excellent – “Smells like Pinot, looks like Pinot and it tastes like Pinot.” Al gave it a perfect five-star score. It retails for $40 and averaged four stars.

Refugio Ranch’s 2013 Escondrijo, a Grenache/Syrah/Petite Sirah blend. “Black fruit, cinnamon, spice and everything nice” said Ken. Laura simply said “the best.” “OMG with BBQ” Susan said. Jim enjoyed the structure and price. The spicy nose made me smile. At $38 it scored just over three and a half stars.

The 2012 Fallbrook Winery Merlot was next, and I loved the color and chocolate cherry nose. It got five stars from Susan who loved the cherry chocolate on the palate and smooth long finish. Al also gave it five stars and said “wow.” It scored better than four stars and sells for $16.

We capped off the evening with San Simeon’s 2011 Paso Robles Petite Syrah. Jim found it fantastic with chocolate covered strawberries. Judi agreed strawberries “really enhanced” it. Ken called it killer with short ribs. At $19 our group found it a good value and gave it an average of four stars.