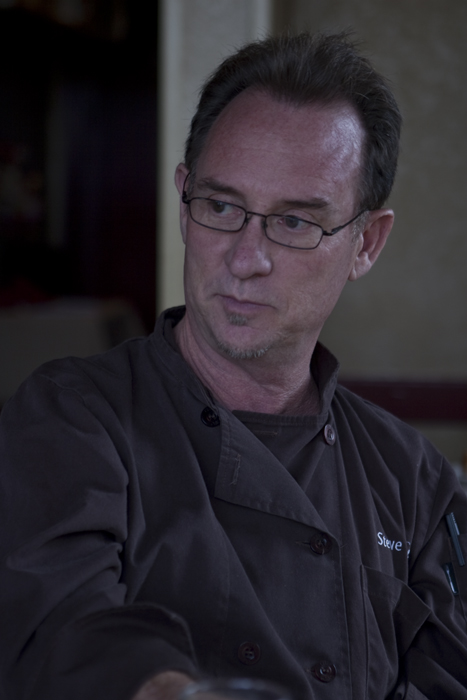 We Are Thankful For Good Food & Wine Since women are responsible for over 50% of wine purchased, Mrs. WINEormous decided to check out some food and wine options for Thanksgiving.

Since Executive Chef Steve Pickell of Cafe Champagne at Thornton Winery has been creating delicious Thanksgiving menus there since 1993, we decided to join him, Thornton’s winemaker, Don Reha and Temecula public relations guru, Linda Kissam for lunch and tastings at Cafe Champagne on a recent weekday.

We reminisced about fabulous dinners past and planned for even more amazing events to come.  Some of Chef Pickell’s Thanksgiving musings: “I keep family traditions alive in some menu items.  There is always turkey prepared like I’ve had my whole life.  At Cafe Champagne we also serve fish, pork and vegetarian entrees.  The majority of guests choose turkey every year.”

Entrees for vegetarians might be in order for your dinner,  Instead of just letting them fill up on side dishes he suggested grilling portobello mushrooms or making them in a lasagna for their meaty texture to compliment the rest of the meal.

Now what wines to pair with this feast?  Both Steve and Don Reha had suggestions to enhance, not overpower my Thanksgiving experience.  Two or three selections should please every palate.  Don helped to break it down with wines he had created.

Start out light with appetizers or soups.  A sparkling wine that is festive (Thornton Non-Vintage Cuvee Rouge), or a crisp Gewurztraminer which relies on spices in the structure.  “Otherwise you’re just drinking bread.” Reha commented.

I had heard that Pinot Noir was the top choice for pairing with turkey,  Again Don suggested that I break with tradition and try a Rose because it’s not too dry for sweet dishes and keeps the palate fresh. “There is nothing in turkey that can stand up to a big backbone of red,” he explained.  Mr. WINEormous whose alias should be “Big Red” looked crestfallen.

Well if you can’t break with tradition choose a red blend like our Thorny’s Cote Red, a blend of Syrah, Grenache, Barbera and Sangiovese.  It’s structure won’t interefere with your food,” he hastily suggested.

Moving on to dessert we tasted Thornton’s  2006 Late Harvest Zinfindel and explored desserts that are pumpkin pie alternatives.  Although in most homes a dessert change would be an addition not replacement.

Time was running short and Don and Steve had just whet my appetite.  I was ready to attend Steve and Anthony Bartoletto’s cooking class on Saturday afternoon.

I left class inspired and eager to experiment until I realized that I would be spending Thanksgiving in Baltimore with family.  We leave you now to explore and create your own traditions.  Or better yet, make reservations at Cafe Champagne and just sit back and benefit from the masters.  Call 951-699-0099.

Look at our current New Weekly Recipes for Steve Pickell’s turkey salad recipe for those leftovers.