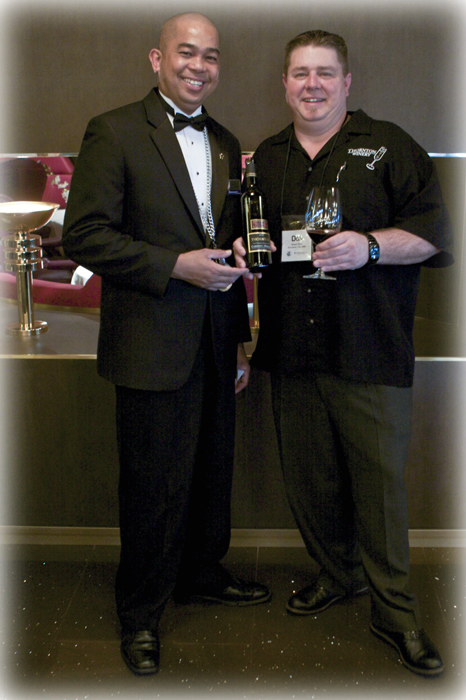 The IFWTWA “Conference At Sea” was an opportunity for a group of writers to not only enjoy a cruise on the Caribbean, but also to see the inner workings of a cruise ship. As a wine writer, I was curious to see the challenges faced by a Cellar Master whose job includes making sure that more than a thousand different wine drinkers each week are happy with what they are offered. Fernando Bacsa has a passion for what he does and he clearly loves his work. He has been with Holland America for thirteen years now and says “it’s not just a company, this is my family.” He does have a family at home in the Philippines, though; a wife and three children. His two sons want to follow in his footsteps and are already in training to work for Holland America.

Fernando got a degree in hotel operations in the Philippines and then began work as a catering supervisor in Libya, working for Moammar Kadafi in the Presidential Palace for five years. He was also employed by Nelson Mandela, so you can safely call him well-rounded. In 1993 he returned to the Philippines to raise pigs and maintained 200 of them for three years. Fernando worked his way up to his current position step by step. He started in 1996 as a bar waiter for Holland America, then became a bartender and a bar supervisor before finally being promoted to Cellar Master. He is fascinated by wine and is eager to learn all he can. His palate is outstanding and I watched him going from table to table during the week, recommending just the right wine to fellow cruisers. Don Reha, winemaker for Thornton and Orfila Wineries was thoroughly impressed with his knowledge as well as his palate. His duties include creating and maintaining the wine lists for all of the ship’s restaurants. He places his orders every two weeks and maintains an inventory of about 5,000 bottles, selling about 3,000 bottles any given week. He finds the job very exciting and it changes from week to week. He not only supervises the on-board wine tastings, but works with groups of sommeliers from time to time when they book cruises. The most expensive bottle you can purchase on board? That would be a 1994 Château Pétrus Pomerol for $2,950, not including the 15% service charge. We didn’t have any.

Every seven days Fernando trains his staff for the wine tastings. My observations were that the wine stewards learned well. They are attentive, friendly without being obtrusive and keep a keen eye on your your glass level. He spends five to six months at sea and then gets two months off to go home to his family in the Philippines. Holland America maintains a training facility in the Philippines for their culinary and beverage staff and each staff member is required to spend one week in training before going back out to sea. The near future looks to be busy for Fernando. As he was in charge of preparing the wine selection for the ms Eurodam, he will soon be doing the same thing for the Nieuw Amsterdam, set for its inaugural launch on July 4th of this year He enjoys the European runs, considering them a privilege and that’s when he’ll bring his wife along for some time. The wine list for European cruises is different from the wine list you’ll find on a Caribbean, Mediterranean or Australian cruise because palates are different depending on the destination. The average wine connaisseur spends between $30 – $50 per bottle. If you’re fortunate enough to cruise when Fernando is your Cellar Master, introduce yourself and shake his hand. He will take excellent care of you and devote special attention to your wine needs.

One of the wine lists prepared by Fernando