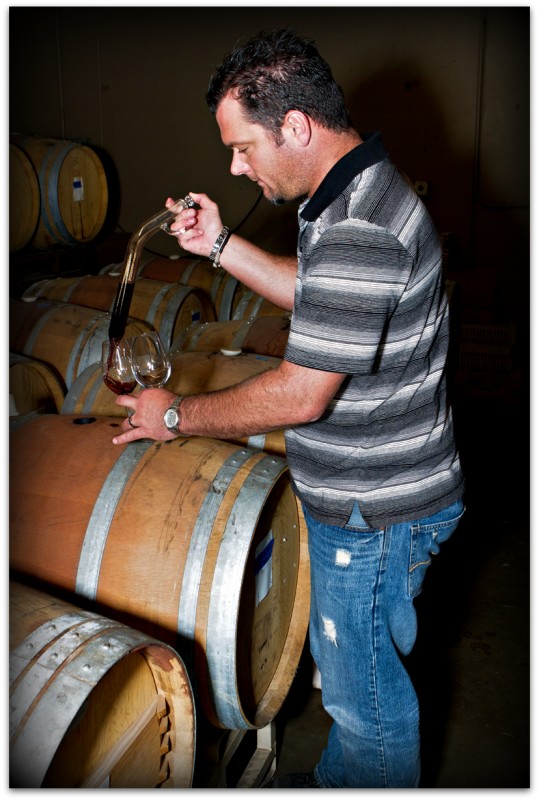 Tim Kramer – A Passion For Wine If you’ve had more than a few Temecula Wines, chances are pretty good Tim Kramer has had a hand in making some of them. Not only is Tim the winemaker for Leonesse Cellars, he is the co-owner and consulting winemaker at Temecula Valley Winery Management. When I asked him how many wines he’s involved in making, his answer was “about 100.” When Tim was 22 years old, he traveled to the Napa Valley and fell in love with it. He returned home and got his hands on every book about wine he could get his hands on. He started making wine from kits in five gallon buckets. He say the Bordeaux blend was horrific, but the Chenin Blanc was “pretty nice.”

Soon he was sinking every nickel he had into buying and tasting wine. Tim took copious notes in a journal and tasted the wines of Bordeaux and Cabs from Napa with a friend. After submersing himself in the wine world for a couple of years, he volunteered at Thornton Winery to get some hands-on experience. Under the direction of Jon McPherson, he dragged hoses, cleaned and shoveled out tanks, driving from San Bernardino to Temecula and back three to four times a week. He was hired on across the street at Callaway Winery where he managed the tasting room and worked in the lab.  At the time, Leonesse co-owner Gary Winder’s daughter was working at Callaway and she told her dad he ought to hire him.

Gary followed his daughter’s advice and Leonesse had their winemaker. Aside from having taken a few extension courses, all of Tim’s knowledge of winemaking came from hands on experience and from the books he devoured. Temecula businessman Dan Atwood approached Kramer in 2003 and asked him if he’d be willing to make Syrah from his grapes. The clients list grew, with Monte de Oro recruiting him in 2005 and Robert Renzoni Vineyards in 2005. Tim found himself either making wine or consulting and doing all of it at Leonesse. Shortly thereafter, the idea for Temecula Valley Winery Management was born. The 30,000 square foot facility is located on Diaz Road in Temecula and houses just under 3,000 barrels and has a tank capacity of 20,000. TVWM has 21 clients under contract. The partners also found a building in Old Town Temecula which has become The Collective, with six wineries under one roof. I asked Tim how he would describe his style of winemaking. “I like wines that are bigger, more robust.” He’s not as concerned with the numbers he sees, he relies far more heavily on his palate. “I go a lot off flavor, looking at the seeds, the way the berries separate.” The Temecula Valley’s warm weather allows sugars to mature faster here. He’s a believer in letting the fruit and vineyards speak. Kramer is one of the first winemakers in the Valley to garner multiple 90+ point wine scores in national wine magazines and was named winemaker of the year in the April 2011 issue of Inland Empire magazine. He also notes with pride he submitted the Woodworth ’08 Pinot Noir to the Pinot Noir Summit and picked up a Gold Medal and 3rd place against some heavy hitters.

“I’m excited about Temecula moving forward” he says. “We have a great climate here and a great growing region. They’re bringing in some really good winemakers.” We tasted from the barrel and I got a chance to try the ’08 Signature Selection Grande Melange, a blend of Grenache, Syrah, Mourvedre and Cinsault as well as the ’08 SS Cabernet. Tim’s winemaking skills were clearly evident. Experience Tim’s winemaking prowess first-hand by visiting Leonesse Cellars or The Collective.