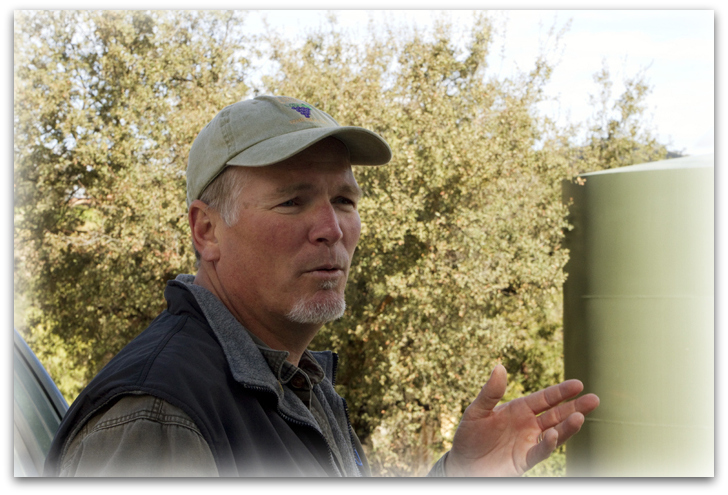 Most of My Winemaking I’ve Learned From My Dad I’ve known Jim Hart for a few years now. I run into him on occasion at Hart Winery. His dad, Joe, is a one of the pioneers of Temecula Valley wine making. He started the winery 30 years ago and chances are darn good if you visit on a weekday you’ll find him in the tasting room or out back. He is still very much hands on, but has given Jim the title of winemaker. Joe is the Executive Winemaker and oversees it all.

Jim has been around wine and wineries all his life. He didn’t intend to go into the family business, but sometimes life doesn’t turn out the way you expect it to. Jim wanted to teach. He got his credential, studying at Mira Costa and Cal State San Marcos and took a job teaching at an alternative high school for troubled kids in Murrieta. The school’s format allowed him a flexible schedule, giving him time to spend at the winery, doing cellar and vineyard work and learning the craft of winemaking from his dad. What Jim learned was that he not only liked making wine, but he enjoyed the lifestyle that went with it, too. When his teaching career ended, he started working full time at Hart Winery. In 2006, an ad in the San Diego reader caught his eye. A winery owner in Ramona was looking for a part time winemaker. He met with Kit and Karen Sickels at Milagro Farm and learned they wanted some one to make wine from their grapes for their personal use. The problem was they had so much fruit that it would have been a shame not to utilize it. Jim proposed they become a bonded winery. He took the job and began upgrading their equipment and planting more vines.

Today there are 10,000 vines planted on Milagro Farm’s 90 acres. The Ramona Valley is home to about 20 wineries, most of them what you would classify as “mom and pop” operations, or “garage-istas” as Jim likes to put it. He also believes there is nearly unlimited potential for making excellent wines there. Pinot Grigio, Chardonnay, Sauvignon Blanc, Cabernet Sauvignon, Barbera, Cabernet Franc, Petit Verdot, Petite Sirah and Aleatico all flourish on the Ramona property. Jim has learned well from his dad. He cites the importance of planting grapes that are suited to the soil and the climate and points out that Ramona Valley and Temecula Valley are vastly different. He says that wines “speak of where they’re made”. He also is a firm believer that wine is intended to be enjoyed with food and thinks that that concept has been lost by many over the past several decades. There is no tasting room as of now at Milagro Farm, but plans are in the works for a 4,000 – 5,000 square foot production facility and tasting room in the near future. The drive to Ramona is awe-inspiring. When you arrive you feel as if you are truly in wine country. There are rolling hills, orchards and plenty of wild turkeys at an elevation of 2400 feet. Turkeys that Jim says consumed most of his Barbera and Sangiovese in 2009. They released their first wines in 2006, a Chardonnay and a Cabernet Sauvignon, but the ’07 vintage he says was “leaps and bounds” better.

We sat in the laboratory and tasted tank samples of the 2010 Sauvignon Blanc and Chardonnay as well as an apple wine he’s working on. We walked across the parking lot and into the barrel room through beautiful wooden doors that used to belong to a church in Mexico. Wine thief in hand, Jim poured barrel samples of Cabernet Sauvignon, a Sangiovese/Barbera blend and Aleatico Port. In tasting his wines, it’s clear Jim has learned well from his father. “People can teach you the basics, but you don’t really learn until you do it yourself.” In 2007, he realized he could make wine on his own.

At Hart Winery, Joe is still very much in charge, but he is allowing Jim to have more of an impact. Whereas Joe used to devote full time to the winery, he feels comfortable enough now to take off for three or four weeks at a time, knowing that his “baby” is in safe hands with his son. It pleases Jim to see his dad now able to enjoy the fruits of his labor. You’ll find Milagro Farm wines at Baron’s Market, Albertson’s in Ramona as well as in a few select restaurants in San Diego County. Tracking it down will be worth the effort. Whether you tastes wines from Hart Winery or Milagro Farm, you will notice the Hart family touch. Jim says his goal is to make wines that are balanced, well-made and fruit-driven, wines that are made to be enjoyed with food. He believes it’s important to make wines that suit the climate and terroir. “Most of my winemaking I’ve learned from my dad.” Jim has learned well from one of the masters of the Temecula Valley.